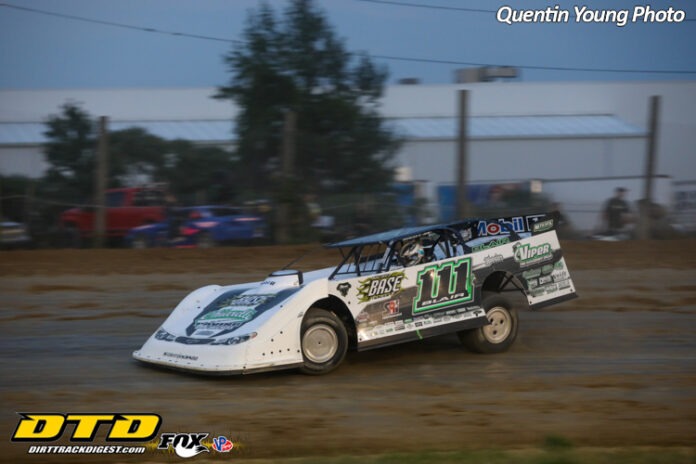 BATAVIA, NY –  Max Blair was perfect on the night as he won everything he could on the night. After blistering the track in hot laps with an unofficial late model track record lap of 15.197 seconds, Blair was quick time, won his heat and won the scramble to put his No. 111 on the pole for the feature. Blair drove away over the first half of the race, with his margin over second increasing just like the amount of precipitation falling. On lap 20, the caution came out for rain to assess the situation but the race was able to get back to green and despite the need for two more restarts, the Centerville, PA driver was flawless to run off to his third ULMS win in Batavia in just five tries.

A Blair cruised to the win, a spirited battle raged on for the runner-up spot. A final restart with two laps remaining jumbled up the spots with Greg Oakes recapturing the second possession on the final lap, while Bryce Davis rallied from a slow start to finish in third, dropping Andy Boozel from second to fourth on the final circuit. Deshawn Gingerich rounded out the top five after local favorite Dave DuBois dropped out late in the race just after driving up inside the top five.

Once the ULMS feature was finish was over, an attempt was made to move right in to the Mini Stock Feature, but the rain intensified to a point where the cars needed to be moved back to the pits until the rain subsided. After 20-30 minutes of rain, the precipitation stopped and the track was soon ready for the final two features.

Josh Pangrazio, who normally is dominant on a slick surface, had no trouble adapting to a surface that just had absorbed a shower as he went hammer down to score his second-straight win. The Elba, NY driver jumped to the lead on lap two around Damian Long and then cruised to the $1,000 payday. Things looked effortless for the driver of the No. 7, but a crash he endured in the heat race bent the rear end of his car which made the effort more arduous to bring home with the win. Bill Taylor chased Pangrazio all night long but would have to settle in second while John Zimmerman ran up to finish third. Damian Long crossed in fourth while Phil Schepis ran a solid race throughout to round out the top five.

For the second race in-a-row, the Mini Stocks ran of a caution-free feature. With the track freshly run in, the drivers were able to stay on the throttle on the top of the track without issue. Dante Mancuso led the entire way to what appeared to be his fifth win of the year, but he was unable to past postrace inspection, handing the win over to James Gayton. Gayton, of Batavia, was back in his familiar No. 10 for the first time in more than a month after waiting on an engine, and ran solid all night long for his first feature win of 2021. Brad Whiteside led a five-car freight train for much of the 15-lap feature and would come home with a second place result. Chris Leone, Andy Schumaker and Brandon Shepard rounded out the fast top five.


Even with a rain delay of more than 30 minutes, racing was done before 10:00 on the Thursday Night program. The racing continues this Saturday with all six weekly divisions, plus the NY6A Micro Sprints running on Autograph Night. The Mini Stocks will also be running for $717-to-win in the Rich Conte/Mikey Holford Memorial. Race time starts at 6:00 p.m. this Saturday. For more information, visit www.Genesee-Speedway.com.