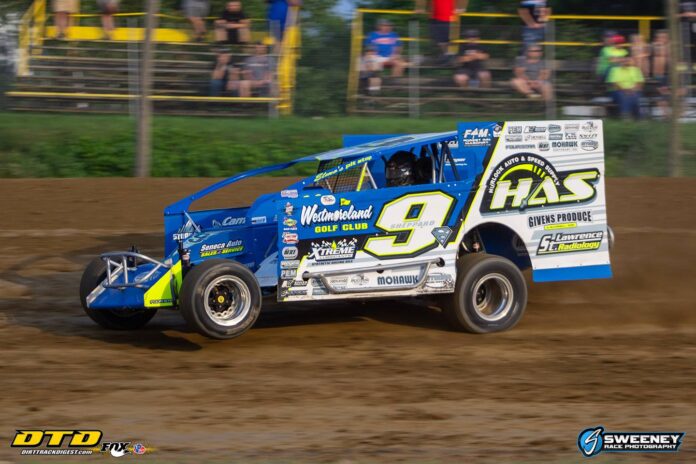 By BOBBY SWEENEY
Matt Sheppard took the top spot early in the Gladiator, a rare Modified event at Genesee Speedway, dominating the majority of the feature event for a convincing win and $5,000 payday.
“It was a fun track,” Sheppard said. “You could run all over it, and I was messing around with lines and felt good everywhere. I just had a really good car, and with Max going to the pits it left the top wide open on the restart. This place is way different than I was here 21 years ago for a DIRTcar Sportsman Series race, and I really enjoyed it tonight.”
Alan Johnson led early over Max McLaughlin and Sheppard in the 40-lap feature, building up a solid gap in the first handful of laps. The first and only yellow of the race flew on lap five, with McLaughlin heading to the pits with a flat right rear during this time.
This put Sheppard in second, firing alongside Johnson for the lap five restart. With Johnson picking the bottom, Sheppard was put up top. Advantage on the restart went to Sheppard, ripping by Johnson for the lead.
From there, Sheppard went on a tear, passing lapped cars high, low, and in the middle. By halfway, Sheppard’s lead was a full straightaway, and only grew from there.
With the checkered flag falling, it was Sheppard winning by over seven seconds, and only five cars finishing on the lead lap.
Alan Johnson came home a distant second, with Danny Johnson, Erick Rudolph, and McLaughlin completing the top five.