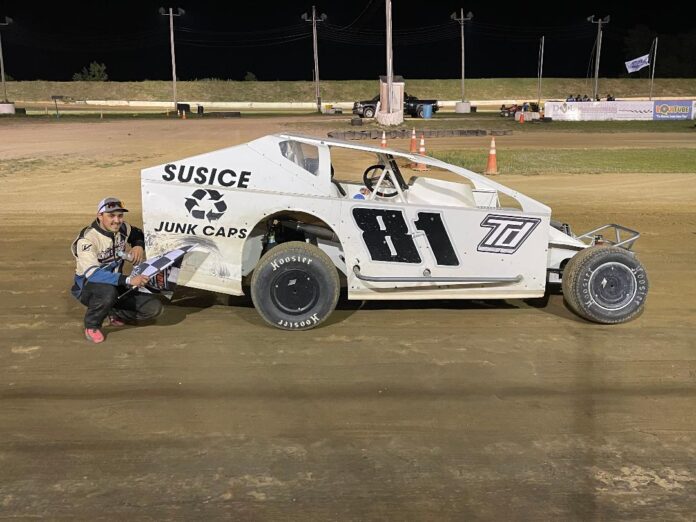 BATAVIA, NY – The Genesee Speedway had gone three weeks since the last point race, so when rain hit the track in the hours leading up to Saturday Night’s event, a pit full of teams were anxious to find a way to race. After the storm clouds cleared and the sun came out, the end result was some of the best racing of the season.

Jeremy Wonderling put his Late Model dominance on display as he charged up from his eighth starting position to capture his third win at Genesee in just his fifth start of 2021. “Mr. Excitement” was able to set his potent No. 3J up for the bottom of the track and that was just the recipe he needed to charge up to the lead.

“This car was really good from the start tonight,” said Wonderling after the 25-lap feature. “The big question in the pits was about tires and the one we chose I had to keep it on the bottom. I had to keep being patient and forcing myself to stay down.”

After two early race cautions, the race ran without stoppage for the final 23 laps which produced plenty of good battles throughout the pack. Wonderling was able to chase down leader Dave DuBois, who was in second, but as he struggled to get by the No. 012 that duo was able to run down leader John Waters despite battling side-by-side. On lap 11, Wonderling was able to move underneath DuBois for second and then a lap later was able to sneak by Waters for the top spot. From there the Wellsville, NY drvier set sail to cruise to the win.

“John and Dave ran me real clean. DuBois and I were side-by-side for a while,” noted Wonderling. “I saw John try to run the bottom and couldn’t keep his car down there but even when I caught him he was tough to get by on.”

As Wonderling drove off to the win, DuBois and Waters engaged in a spirited battle to the finish for the runner-up spot, with DuBois prevailing for that position. JJ Mazur also put on a performance as the former track champion charged from 17th to inside the top five in the first half of the race but would finish fourth in the tire tracks of Waters. Jon Rivers had a steady race to round out the top five.

Austin Susice had the lead four laps in to the Sportsman Feature, but when he slipped up over the banking in turn four, he thought he threw his chance away, when another driver’s misfortune gave Susice the lead again he made sure he would not let it slip away a second time.

Susice, of Ransomville, dominated the 25-lap event for his second feature win of the season. Susice had a wild opening four laps as he and Cameron Tuttle engaged in a great battle for the lead. Susice’s No. 81 pushed entering turns 3 and 4 on the first two circuits, which allowed Tuttle to hold on to the lead, but on lap 3 Susice got his car rotating and was able to ride in to the lead. Two laps later, he entered turn three to hot and slipped over the banking and fell behind Tuttle in second. He would give a strong chase to the No. 35T, but on lap 12, as the duo was reaching the tail end of the field, a car spun around in front of them, leaving nowhere for Tuttle to go and saw him spin around, forcing the leader to the back of the field.

“The car was fast out of the box but when I stepped on it turn 3 I figured Cam would have the race,” admitted Susice after the race. “That was a tough deal when he got caught up in the lapped traffic but from there I wasn’t going to let it go.”

Once taking back the lead, Susice was perfect as he used a myriad of lines around the speedway. Dave Conant made a big move on a lap 13 restart to take second away but was unsuccessful in reeling in the leader and would have to settle for his second runner-up finish of the year. Phil Vigneri III drove up from his ninth starting position to finish in third while Kyle Richner and Jim Harbison completed the top five with solid runs.

Street Stock point leader Bill Taylor padded his advantage on Saturday Night, as he scored his fourth feature win of the season. Taylor, of Arcade, drew the eighth starting position for the 20-lap feature but was able to drive underneath leader Jesse Qutermous on a lap six restart and then fended off the advances of Brandon Sherwood. On a tacky surface, Taylor was a rocket on the bottom until taking the lead, then held steady on the top line as the leader while Sherwood closed but could not get close enough to set up a pass. Behind that lead duo was Tommy Kemp, who rallied to finish in third, ahead of John Zimmerman and Damian Long, who rounded out the top five.

The Mini Stocks ran a special 17-lap, $717-to-win feature for the Rich Conte/ Mikey Holford Memorial. A full-field of cars saw James Gayton take the early lead, but during a lap 8 caution his No. 10 went up in smoke and handed the lead over to former champion Brad Shepard. Before the next lap was completed though, it was defending champion Brad Whiteside who was out in front and put his mark on the race as he would run to his fourth win of the season. Whiteside, of Caledonia, charged from the 12th starting position in the opening circuits and appeared to have a smooth ride to the victory, but a late charge by Eric Weis would keep things interesting down to the final lap. Weis would come up just shy in second, while Rocco Conte proudly placed third in the No. 717jr. Andy Schumaker and Ashley Harbison rounded out the top five.

Jake Bansmer claimed his 9th feature win in just 11 starts in the Novice Sportsman division. Bansmer, of East Aurora, drove underneath Allison Dewitt to take the lead on the opening circuit and then never looked back as he carefully peddled on the slick surface to keep the field under his command. Andrew Joy held off Tyler Guzzardi in a spirited battle to come home with a second-place finish.

Ridge Cobb became the fifth different winner of the young Bandit division, as he led all 10 laps to score his first career Genesee win in just his second start. Cobb held a healthy lead through most of the feature but had challenges just after halfway from Kayley Bacon who applied pressure but would have to settle for second place. Point leader Alexis Traxler also gave good chase but would finish in third.

Racing action returns next Saturday with all six divisions in action, including the DIRTcar Sportsman Tour invading for the first time this decade. All the action will kick off a 6:00 p.m. For more information, visit www.Genesee-Speedway.com.