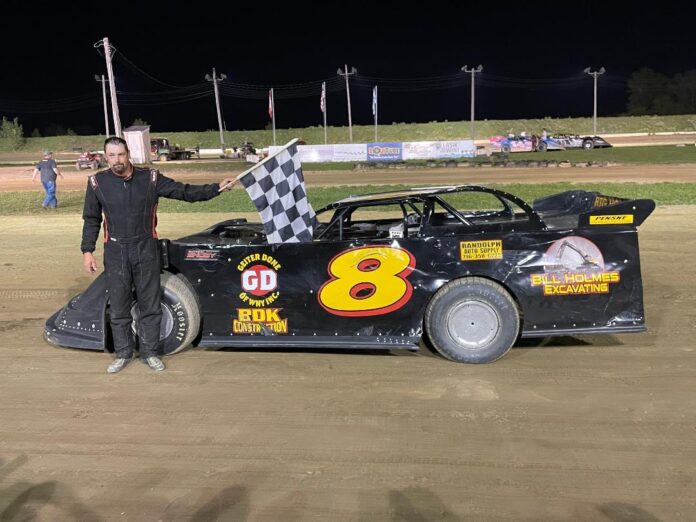 BATAVIA, NY – A hot and humid night that was preceded by rain earlier in the day presented the perfect conditions for fast and exciting action Saturday Night at Genesee Speedway. Add to it that autograph night brought out lots of sharpies, candy and pictures and it was a special evening for racing.

Late Model point leader Bill Holmes has been at his best this season when the track is on the slicker side, but on the tacky surface on Saturday he fared just as well, cruising to his fifth feature win of the season. Holmes, of E. Concord, took the lead on lap five from Austin Hauser and never looked back in the caution-free 25-lap event.

After starting fourth, Holmes was up to second place by the end of the first lap, he stalked Austin Hauser until finally moving by. Once getting in front, Holmes maintained a lead near two seconds while slicing through lapped traffic. The nearest competition was Doug Ricotta, who drove up from sixth to second but was a caution flag away from going for the win and would settle for second. Dustin Waters drove from eighth to finish third. Jimmy Johnson squeaked out fourth place over Austin Hauser at the line.

Austin Susice ran to an apparent win in the Sportsman Feature, but after the event, Susice was deemed to be have illegal engine components and was disqualified, handing the win over to Cam Tuttle. Tuttle, of Wilson, started off strong running to the lead from the outside pole position. He held the lead throughout by riding the rim of the 1/3-mile oval, which is typical a successful strategy at Genesee, but on Saturday night the bottom line was also serviceable and that was where Susice was able to gain in his No. 81. After showing his nose on the bottom for a few laps, Tuttle went to block but got crossed up to open up the door for the lead change. Tuttle would then have to hold off Dave Conant which would end up being for the race win. It is the fourth win of the year for Tuttle. Conant’s second place result was followed by a close Noah Walker. Point leader Phil Vigerni III had to start at the tail after mechanical issues in his heat race but was the hard charger of the feature as he nipped Kyle Richner at the line as they rounded out the top five.

The Street Stock Feature had a feel-good result as Brandon Sherwood captured his first feature win at Genesee after so many close calls. Sherwood, of Sanborn, jumped out in front from the outside pole but had polesitter Tommy Kemp chasing him all the way to the checkered flag for the win. Sherwood, who had finished in the top 3 in eight of his last nine features without grabbing a win, held a steady lead until a caution on lap 16 erased his advantage over two seconds and allowed Kemp two final chances to dive underneath the No. 87 but Sherwood was too strong and would drive off to become the seventh different driver to win a Street Stock feature this year. It was also a big night in the championship race for Sherwood as point leader Bill Taylor was involved in a wreck on lap two and was unable to continue. As Kemp crossed in second, a feverish battle was on for third with Dan Schulz driving up for his best finish of the year. Tom Baker also recorded his best finish of 2021 with a fourth place result, with Pat Powers rounding out the top five.

The Mini Stocks reeled off a caution-free feature which came right down to the wire for the win; in the end Andrew Gayton was able to fend off Bill Weller Jr. for his third win of the season. Gayton, of Batavia, had Weller breathing down his bumper as they crossed under the white flag and as the duo entered turn one, Gayton instantly showed smoke and fluid spewing out of his No. 10A as they raced through the corners. The smoke reappeared in the final set of corners but he was still able to hold off Weller for the win. Gayton would state after the race that it was a power steering line that blew but when it happened he feared it was the engine and was going to have to destroy it pushing it to the finish line. It was the third-straight top two finish for Weller who gave good pressure throughout the event. Rocco Conte’s No. 717jr lost power on the final lap, handing third over to Ryan Allen for his best finish in his fifth start of 2021. Don Whiteside also had a season-best finish of fourth while Andy Schumaker rounded out the top five.

The Novice Sportsman Feature was an absolute thriller as Allison Dewitt held off division point leader Jake Bansmer to capture her first career feature win. Dewitt, of LeRoy, jumped out front on the initial green flag but lost the lead to Bansmer coming to complete lap eight. As the duo entered turns 1 and 2 though, Dewitt was able to use a lapped car as a pick and get back around the No. 71 to take the top spot back. Once retaking the lead, Dewitt moved her No. 16 to the bottom of the track to hold on for the win over a fellow Bandit Champion. Tyler Guzzardi crossed in a closs third.

Ridge Cobb captured his second Bandit Feature win of the season as he passed Seth Johnson on lap three and never looked back to win the caution-free event. Cobb started in third but quickly drove forward and was solid slicling through lapped traffic to return to Victory Lane in just his third start in Batavia. Point leader Alexis Traxler made a hard charge to challenge for the lead but would settle for second. Seth Johnson rounded out the podium positions.

Just two weeks remain in the regular season. Next Saturday, Royal T Trucking will present a Super 6 at 6:00 program, featuring Halloween night as part of “Kids Night Out”. For more information, visit www.Genesee-Speedway.com.

Mini- Andrew Gayton held off Bill Weller Jr. for his third win of 2021 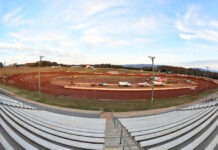 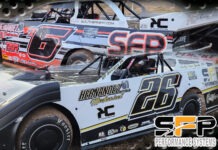