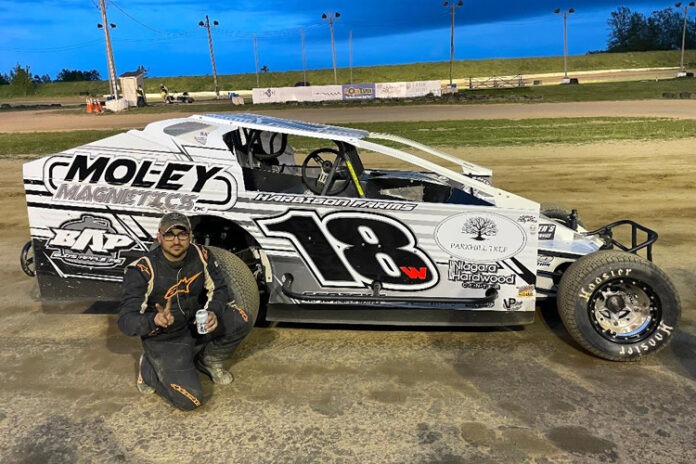 BATAVIA, NY – With thunder and lightning surrounding the Genesee County Fairgrounds, six classes of competition were able to execute a full show in under 2.5 hours; when the final checkered flag fell, the skies opened up as a thunderstorm soon soaked the Genesee Speedway as the race winners packed their cars up in the pits after visiting victory lane.

The Late Models ran the final feature of the night and with the rain closing in, it was a question if the 25-lap feature would even be run to its conclusion. Just before the halfway point of the event a caution flag came out for Jimmy Johnson and Jon Rivers coming together. That yellow flag would bunch up the field and allow Chad Homan to start alongside race leader Bill Holmes for a double-file restart as the race was not yet to halfway. On the ensuing restart, Homan found bite on the bottom and took the lead as they came to the cross flags and soon-there-after another caution flag. Over the second half of the race Homan was untouchable and would run off to the victory in his first appearance at Genesee this year.

“I wasn’t sure the bottom line was going to work because I had seen some rubber up on the top, but starting sixth I had to try something,” said Homan in Victory Lane. “We came here just to tune up for the RUSH (Late Model Tour) race next week and got a win!”

While it was his first trip to Batavia in 2022, it was Homan’s 7th win in eight tries this year. As he was driving away, Brady Wonderling was able to drive up to second after starting in eighth. Bill Holmes would hold off Doug Ricotta for third while Jimmy Johnson rallied from the back to round out the top five.

Through the first three Sportsman races of the season, Phil Vigneri III, Jim Harbison and Cameron Tuttle had each picked up a feature win; on Saturday night that trio battled it out to see which of them would collect their second. In the end it was Jim Harbison keeping Tuttle at bay to capture the win.

Harbison, of Ransomville, took the lead at the start of the race from the outside pole from Dave Conant while Tuttle used the bottom to move up to second a few laps later. After what would be the race’s only caution on lap five, Harbison chose the outside for the restart. The driver of the No. 18w would use the high groove in turns one and two to pull back in front then crossed down to the bottom in the third and fourth corners to reestablish his advantage and would never relinquish it from there.

“(Multi-time track champion) Kyle Inman used to tell me that you race on the bottom, but you restart on the top here, so that’s what I did,” said Harbison in Victory Lane.

As good as Harbison’s lap six restart was, Tuttle, along with Vigneri were able to reel in the leader in the closing laps; and with lapped traffic in front of the group, Harbison had to choose wisely to hang on to the lead. With two laps to go he got out of the top groove and went underneath a lapped car which would prove to be the winning move as he would capture the checkered flag over Tuttle and Vigneri close behind. Dave Conant and Kyle Richner would complete the top five.

To open the 2022 season, defending Street Stock Champion Bill Taylor had finished all three features in the runner-up spot; on Saturday Night, despite getting caught up in two heavy crashes, he was able to keep his car on the track and found his way up to the front to capture his first win of the year. Taylor, of Arcade, was caught up in a lap two incident where he got spun in turn two and was t-boned by Jesse Qutermous, the driver he shared the division championship with in 2020. Qutermous was unable to continue, while Taylor rejoined at the back. On lap five, Sherman Gage spun in turn two and Taylor knocked off the entire rear deck of the No. 21s. Gage was unable to continue, while Taylor kept his No. 1 in the event. On the ensuing restart, Taylor was back up to third and on the charge to the front. Just after halfway, he was able to run down Mike Kelly and pass him to take the lead. There was no challenging the point leader over the second half of the race as he went on to get the win. Kelly would finish in second, his best career feature result. Jacob Vick’s third place result was also a career-best effort. Dale Rissinger and Ron Mogavero rounded out the top five.

The crowd was on their feet for most of the Mini Stock Feature as Olivia Coniber held off the top two in points to score her first career feature win in the division. Coniber, of Corfu, had Bill Weller Jr, last week’s winner applying pressure to her bumper down the stretch but could not find a way by the No. 004. On the final lap, Weller dove down to the bottom coming off the fourth corner and tried to out drag race the leader, coming up just .051 seconds short, a matter of one foot at the line. James Gayton would finish in third while Eric Brumsted and Robert Knapp II rounded out the top five.

Greenley George captured her first Novice Sportsman win at Genesee leading wire-to-wire to claim the checkered flag. George took the lead from Casey Jonathan on the opening circuit then held off Allison Dewitt down the stretch, who had won the first three events of the year. Dewitt would settle for second while Bailey Logsdon rounded out the podium.

The Bandits ran the first feature of the night and had easily the wildest finish of the night. Jaeden Tarr started on the pole, however it was not until the final corner that he took over the lead, but that was still good enough to capture his first career win. Tyler Foster led the opening lap but had an issue on the second circuit which allowed Jonathan Logsdon to take over the lead. Logsdon would lead as the field received the white flag with Tyler Foster chasing him back down but in turns 3 and 4 Foster got in to the leader and the duo pushed over the banking, allowing the No. 88 of Tarr to slip on by. Behind Tarr at the lead would be Morgan Coniber for second and Nicholas Lipome, who rounded out the top three.