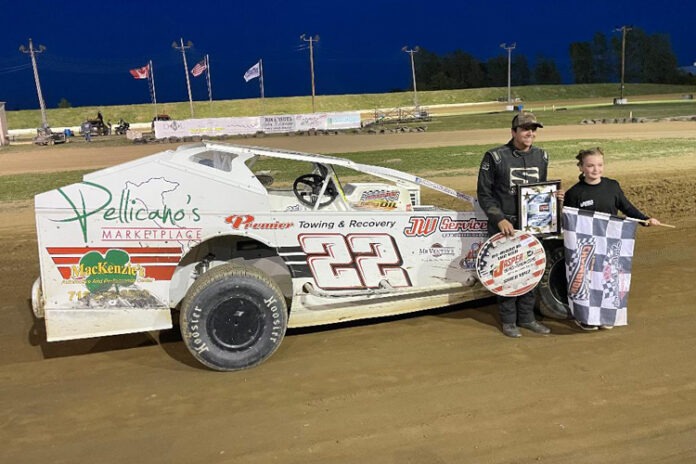 BATAVIA, NY – A perfect night weather-wise set the scene for the sixth-straight Saturday of racing at Genesee Speedway. The result was three drivers picking up another victory for 2022 while three other drivers, who are not strangers to Victory Lane in past seasons, finding their way back for the first time this year.

Walker, of N. Tonawanda, held off a late challenge from Dave Conant for his first win of the year in the Sportsman division. Walker took the lead on lap 13 when leader Phil Vigerni III got caught up in lapped traffic but then found himself mired with the back of the pack putting his chances of holding on to the lead in question.

“I’m not sure what happened with Phil and the lapped car, but I saw him get slowed up and knew I had room to get underneath him,” said Walker in Victory Lane. “Then I saw the 44 (of Conant) on the board in second and knew he runs good on the bottom so I kept the car down there the best I could.”

As Conant was closing back in on the leader with 2 laps remaining, Walker dove underneath a lapped car and got his car to stick which would turn out to be the breathing room he needed to capture his first win of the season. Conant, last week’s feature winner, would settle for second while Vigneri would round out the top three. Defending champion Cameron Tuttle was a closer fourth while Kyle Richer collected his fifth top five of the season.

At the end of the night, Jeremy Wonderling put on a performance in the 25-lap Late Model Feature for his second win of the year. While former track champions were breathing down his next at the finish, Wonderling was in control in front of the pack.

“It finally feels like we are hitting our stride,” declared Wonderling in Victory Lane. “We’ve done a lot of work on the car and had a really good car here tonight. I wish I had this good of a car last week (RUSH Tour Race).”

Wonderling led from the pole position and had a healthy lead until a caution flag on lap 10 erased his advantage. On the double-file restart, Wonderling chose the inside lane, a rare selection at Genesee, but “Mr. Excitement” knew what he was doing.

“I’m sure I shocked a bunch of people doing that. There was just so much brown down on the bottom though I knew I could get the launch off.”

A final caution on lap 21 would allow JJ Mazur to close back in, and while Mazur got a better restart that time, Wonderling would huge in the middle groove to keep his No. 3J out front. The fastest car over the final four-lap stretch was Jimmy Johnson, who rode the rim to drive around Mazur off the final corner to finish in second behind Wonderling. Behind Mazur was Doug Ricotta for fourth and Steve LeBarron in fifth.

John Zimmerman got a late start to 2022 but he let his presence be known on his first appearance to Genesee on Saturday Night as he dominated the 20-lap Street Stock event. “The Z-Man” started in fifth, but took the lead by the second lap and never looked back in his No. 0. Zimmerman used the bottom line to take the lead from Phil Schepis but then started hanging on the top of the track with a safe lead. Halfway through the race though, he moved back to the bottom and drove off to a comfortable win. Point leader Bill Taylor had to fight hard to hold off Byron Dewitt for second in a fierce battle. Behind that duo was Jesse Qutermous and Brandon Sherwood, who rounded out a fast top five.

Four-time track champion Dante Mancuso was dominant in the Mini Stock Feature as he claimed his first win at his hometown track in 2022. Mancuso, who started in sixth, took the lead on lap five from Cole Susice by running the inside groove then moved up to the top and peddled his No. 1 in front of a loaded field and steadily pulled away to claim the victory. Susice would hold off Chirs Leone for second while point leader Bill Weller Jr was fourth, ahead of Caleb Wolcott, who claimed his first top five of the year.

Greenley George claimed her second win of the year in the Novice Sportsman division, leading all 15 laps in her No. 26. George, of Wilson, was holding a comfortable lead when a caution with 2 laps to go gave John Livingston Jr. a chance to make a bid for the lead. Livingston made a dive underneath the leader going in to turn one but could not hold his No. 1J down and George was able to drive back in front and stay there. Livingston would settle for second while Paul Marshall was third.

Seth Johnson scored his third Bandit feature win of the year in dramatic fashion after he drove underneath Jonathan Logsdon coming to the white flag and completed the pass in the final set of corners to claim the win. Johnson, of Castile, was initially battling for the lead on lap six when leader Morgan Coniber spun in front of him, bringing both cars to a stop. Johnson quickly ran back up to second and then chased down the leader and hit his marks to jump back in front. Logsdon would settle for second while Nicholas Lipome rounded out the podium.

Next Saturday Night, the Lucas Oil Empire Super Sprints will invade Batavia for their only visit of the 2022 season. The show is presented by A-Verdi Storage Containers and will feature all of the weekly divisions. Racing will kick off at a special time of 5:00 P.M. For more information visit www.Genesee-Speedway.com.