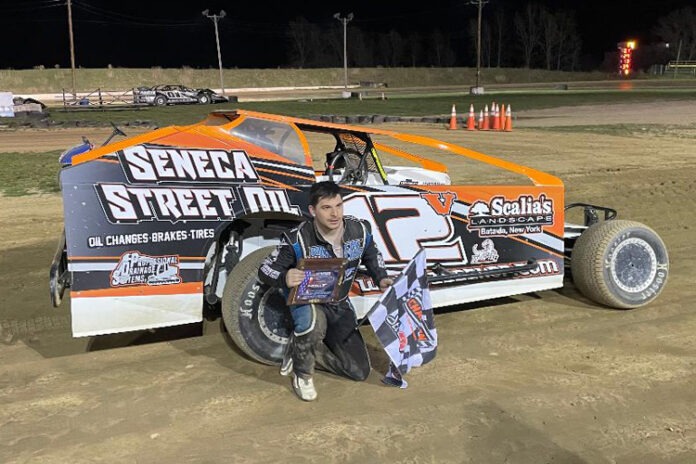 BATAVIA, NY – When the 2022 schedule came out, Phil Vigneri III was quick to circle Thursday’s event at Genesee Speedway, as the DIRTcar Sportsman Tour invaded his hometown track and allowed him the chance to defend his turf in a special event.

With heavy storms in the region staying away from Batavia, the special Thursday Night event at Genesee Speedway ran off without issue to “Light Up the Night for Kenzie”. That was good news for Vigneri, who hit the track for the feature with a strong car and proved it over the course of 35 laps.

Vigneri, of Elba, led wire-to-wire for his second win of the season at Genesee. The driver of the Ray Smith-owned No. 12v drew the pole position and selected the outside line for the start, which proved to be the right choice as he jumped out in front of the pack with ease. The caution flag would appear after two laps, but that would be the only caution of the race, which would mean plenty of lapped traffic for Vigneri, which were his toughest hurdles he needed to clear to park in Victory Lane.

As “PV3” approached the back of the pack, he carried a lead of nearly three seconds over teenager Ryan Barrett. That lead would erode once setting up passes on lapped cars, especially when Vigneri attempted to move by Brad Rouse, a two-time winner at Genesee in 2019.

“Honestly that lapped traffic was a good thing for me,” said Vigneri after the race. “I was having a tough time getting around guys and figured if it was that hard for me to pass lapped cars, the guys behind me were going to have an even tougher time taking the lead away.”

After laps of driving underneath Rouse, Vigneri was finally able to put him in the rearview mirror. A pass a few laps later around the outside of defending Novice Sportsman Champion Jake Bansmer would appear to give him the breathing room he needed, but before he could get to the checkered flag, one more issue would present itself.

“With a couple laps left my power steering went,” said Vigneri. “If a caution would have come out I’m not sure how it would have finished.”

Vigneri was not the only driver grinning from ear-to-ear on the front stretch after the 35-lap event; Ryan Barrett was able to log the best run of his career, finishing second for his first career top-five on a night when a host of invaders travelled to Batavia. Barrett was able to run a steady line to keep two-time winner Jim Harbison at bay, as Harbison would finish third stoked for Barrett. Canadian Billy Bleich would run a solid fourth while defending track champion Cameron Tuttle rounded out the top five.

Over the years, Jeremy Wonderling has earned the moniker “Mr. Excitement”, but in the Late Model Feature, he left the excitement for second place on back. Wonderling, of Wellsville, dominated the 25-lap event for his third win of the year at Genesee. Wonderling out ran Jimmy Johnson from the outside pole the used a high line to stay out in front almost effortlessly. After struggling the first portion of the season, Wonderling has hit his stride with wins in two of the last three races. As he cruised to the win, a good battle waged for second between a pair of past champions, with Jimmy Johnson holding off JJ Mazur. Paul Grigsby and Doug Ricotta rounded out the top five.

It was one of the biggest nights of the year for the Mini Stocks as it was the 25-lap event for Mackenzie Kulesza and it was James Gayton, the driver who put her name in vinyl along the side of his newly-redesigned blue No. 10, who dominated the show and parked the tribute car in Victory Lane. Gayton was within a foot of winning Mackenzie’s birthday event last year and wanted redemption in the worst way. He was dominant force throughout the 25-lap event, with a lead as large as five seconds over the course of the race. Gayton’s fist was pumping out of his window as he crossed the line. Behind the leader was an intense battle for second, with Cole Susice outdueling Olivia Coniber for the runner-up spot. Chris Leone would finish fourth while Tony Kulesza, Mackenzie’s Father who was driving point leader Bill Weller’s Jr. car, was able to round out the top five.

The Pro Mod division made a special appearance with the support of Close Racing Supply and put on a special show and did not disappoint. The moment of the race came on lap 10 when Dennis Lunger made a wild three-wide maneuver around the outside of Zain Harvey and leader Tyler Oakes to get in front and run off to win the 20-lap event. Early in the race, Lunger was trying to take the lead from Oakes on the bottom but when Zain Harvey rain the top duo down, Lunger moved his No. 71L to the top and made a bold move to get in front of the pack. As Lunger drove off to the $1,000 top prize, double-duty driver Steve Dixon drove up to finish second while Adam Ashcroft, the winner at Genesee in 2021 was third. Oakes and Harvey would round out the top five.

The Street Stock Feature saw Bill Taylor and Rich Conte, the top two in points, duel for the top spot for much of the 20-lap feature, but on lap 19, those two came together in turns 3 and 4 and both were forced to go to the back of the pack; that was just the break that Dennis Cummings needed to return to Victory Lane. Cummings, of Wellsville, led the final two circuits to score his first win at the Genesee since 2020. The 2018 Track Champion stated on social media earlier in the week that the new $100 bump in the winner’s purse was irrelevant to him, but he proved that wrong as he parked it on the front stretch after holding off Mike Kelly down the stretch. Kelly’s runner-up finish was his second such result of the year. Tommy Kemp and Byron Dewitt battled hard to the line for third, with Kemp getting the best of battle for third. Dale Rissinger rounded out the top five.

The Novice Sportsman ran a feature-only format on the night, which worked out just fine or Greenley George, who drove to the front to earn her third feature win of the year. George, of Wilson, took the lead on lap seven from Dave Mamo and never looked back to cruise to the victory. Before she took the lead George had a scary moment on lap five when she got turned sideways on a restart when a car collided with her No. 26 and had her parked on the track. George looked like her newly-wrapped car would get t-boned by Bailey Logsdon, but Logsdon was able to avoid major contact and just clip the parked car. After that near disaster, George was on a mission and would drive off to her third win in four starts at Genesee this year. Canadian Zach Bleich would jump in to the No. 108 and would drive up to finsh second while Mamo would round out the top three.

Bryson Hill made his third start at Genesee just as successful as his prior two appearances, as the youngster claimed his third Bandit Feature win of the year. Hill led all 10 laps but had a late challenge from division point leader Seth Johnson, who started seventh but quickly ran up to second and then chased down Hill’s No. 38. A caution with two laps remaining allowed Hill to reset, change his line and drive off while Johnson would have to settle for his second-straight runner-up spot. Racelyn Lippa crossed in third for her first podium finish.

Racing at Genesee Speedway is now over for the month of June, with the next event not until Saturday, July 2 when all six divisions return to the 1/3-mile for a “Red, White and Blue” Special event, featuring an incredible fireworks display! Also on the card will be the 30-lap Brian Ace Memorial, Kid’s Night Out and much more. For more information, visit www.Genesee-Speedway.com.