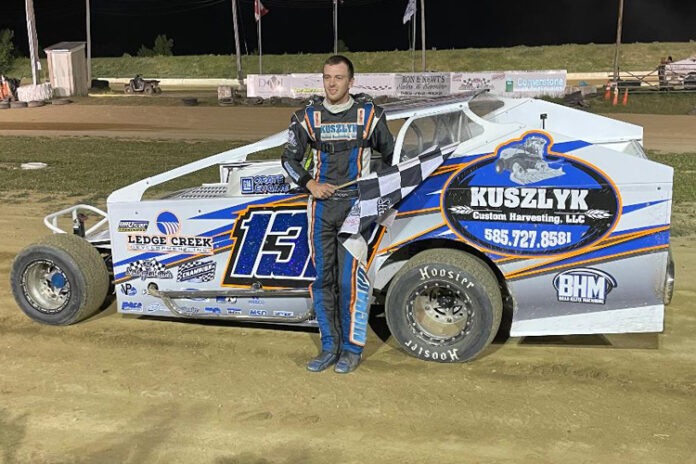 BATAVIA, NY – A return to racing after a 16-day hiatus brought on plenty eager competitors to get back to the top spot; while most of the winners were repeat visitors to Victory Lane, one driver made his first trip to the Winner’s Circle in eventful fashion.

Brandon Michaud had to run 33 total laps on Saturday Night, all of them with Kyle Richner peaking inside his left rear quarter-panel of his sportsman, and while Richner had a strong piece, Michaud was able to stay in front every one of those laps to be the first to the checkered flags.

Michaud, of Medina, captured his first feature win of the season in 2022 in the 25-lap feature. In an event that ran green for the final 22 laps, it was a duel between a pair of drivers seeking their first win of the year. The gap was never more than a second apart for the top spot, including on the final lap when they reeled in Jessica Kriegisch, Brandon’s girlfriend, to put her a lap down. It was a potentially contentious maneuver that Michaud knew he had to be successful with.

“My first thought was don’t hit her or I’ll be sleeping on the couch,” quipped Michaud after the race. “I saw Kyle peak his nose under a few times but I knew he would race me clean.”

After the leaders moved by the lapped car, Richner would dive to the bottom groove in the final set of corners, but it was there where his No. 26 would suffer a broken driveshaft. As Michaud drove off the corner to the win, Richner washed up the track and then came back down the front stretch where the rest of the pack was breathing down his slowed car. The hardest contact was made by point leader Cameron Tuttle, who collided with the left rear of Richner and would stop on the finish line in sixth place, while Richner came to a stop short of the finish line.

Richner’s issue would enable Dave Conant to move up to finish in second while Noah Walker drove up from third after not being able to start his heat race. Jim Harbison and Phil Vigneri III rounded out the top five.

The Late Model event also featured a long green-flag run, with the final 24 circuits running off without issue, which played in to the hands of Chad Homan, who drove off to a win of exactly 5 seconds.

Homan, of Macedon, was able to move in front of JJ Mazur on a lap two restart and never looked back to capture his third win at Genesee in four attempts this year.

“I was surprised (Mazur) gave me the top of the restart,” said Homan after the event. “It was just what my car needed and from there I could put the car anywhere.”

The last time Homan was at Genesee, he finished 7th which had he and his crew going back to the drawing board. On Saturday Night, he returned to form. Mazur would settle for a solid second-place effort while Jimmy Johnson rallied from an issue on the opening lap to drive back up to third after restarting in eighth. Bill Holmes and Doug Ricotta completed the top five.

When John Zimmerman laid out his 2022 race calendar, he put green dots next to the events he knew he could not miss; Saturday’s Brian Ace Memorial for the Street Stocks was one of them. When the 30-lap feature was complete, it was Zimmerman scoring the win for the second consecutive year.

Zimmerman, passed Dan Schulz coming to complete lap 10 and then drove off to claim the $1,000 top prize. The race was slowed on three occasions early on for major wrecks. The first occurred on lap 2 when 12 cars were involved in a pileup in turn three. On a lap eight restart, four more cars were collected, taking out point leader Bill Taylor. On lap 10, veteran Kenny Begnouche jumped off the banking and slammed the retaining fence but would walk away unharmed. With only one caution over the final 20 laps, Zimmerman’s No. 0 showed its true strength during green flag action.

“I put on a different tire compound on the night and it took a few laps to heat up,” he noted in Victory Lane. “Once the tire came to life the car just took off and we were able to drive off.”

As “The Z-Man” was running off to the win, Dan Schulz held a steady line for second. Glenn Whritenour’s first time to Genesee in 2022 saw him round out the podium in third. Brandon Sherwood rallied from the lap two wreck to run back up to fourth while Mike Kelly rounded out the top five.

James Gayton scored his third-straight feature win in the Mini Stock event, as he passed Olivia Coniber for the lead on lap 7 and drove off for his fourth win of the year. Gayton noted after the race that he had to use a lot of control in the right foot to keep his No. 10 straight under what was slick conditions at the time. Coniber would settle for second while Caleb Wolcott put together a fine third place effort to go along with his heat race win. Bill Weller Jr and DJ Williams battled hard to the line to round out the top five.

Greenley George scored her fourth Novice Sportsman Feature win of the year in her fourth straight appearance, as she led all 15 laps to cruise to the win. George was able to get quicker as the race wore on by hitting her marks off the bottom of the corner to pull away from John Livingston Jr., who had his second runner-up finish of the season. Birthday girl Allison Dewitt rounded out the podium in third.

To end the night, Seth Johnson dominated the 10-lap Bandit Feature to become the third driver on the night to win their fourth feature of 2022 at Genesee. Johnson held off a solid Morgan Coniber, who crossed in second while Jonathan Logsdon came home in third.

After a week off next Saturday, all six divisons come back to life on Saturday, July16 in an event presented by L&L Transmissions, starting at 6:00 p.m. For more information, visit www.Genesee-Speedway.com.