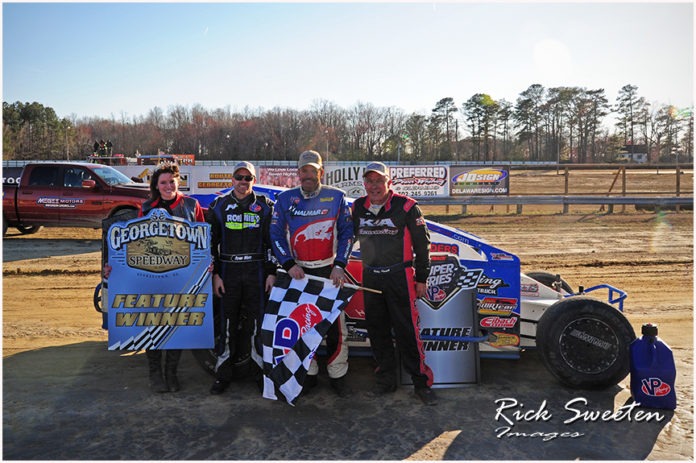 A hearty crowd took in the quickly run program, which spun off with temperatures in the 30s.

The ‘Sensational One’ Horton led the 30-car starting field to Warren Alston’s green flag. Horton led the opening four circuits around the half-mile oval before 2015 STSS South Region champion Ryan Watt swept into the top spot. Horton was shuffled back to third in the exchange.


However, he didn’t back down.

“The driver fell asleep and let Ryan get the lead,” Horton said. “I knew I had a good car. I got back by him and after that, it was conserve mode to save the tire.”

As Watt led, Billy Pauch was making a run toward the front from 12th starting spot in Kevin Bifulco’s No. 1.

By lap 14, Pauch had arrived in second, trailing Watt while Horton held third.

The race’s pivotal moment occurred on the 16th lap. Entering the third turn, the leaders fanned out three-wide, with Horton diving to the bottom, Watt in the middle and Pauch to the top.

Horton emerged with a lead he wouldn’t relinquish, conserving tires and holding Watt at bay during numerous restarts and increasingly slick surface.

Watt, of Boyertown, Pa., settled for second as he continues to chase his first Modified victory in the state of Delaware. Pauch, of Frenchtown, N.J., completed his strong drive with a podium effort in third. Duane Howard of Oley, Pa., ended a steady effort in fourth place after starting sixth in Norm Hansell’s No. 357.

A hard-charging David Van Horn Jr. of Harmony, N.J., piloted the Fred Vahlsing-owned No. 323ov from 21st to finish fifth.

Completing the top-10 were Tyler Dippel of Wallkill, N.Y.; Jordan Watson of Milford, Del., who earned the $249 Hard Charger Award after driving from 28th to seventh; Frank Cozze of Wind Gap, Pa., in his debut driving for Dave Renaldo; Brett Kressley of Orefield, Pa., recovering from an early spin; and Jamie Mills of Milford, Del.

Dagsboro, Del., driver Scott Hitchens drove to a $1,000 victory in the 20-lap L&J Sheet Metal Crate 602 Sportsman main event. Hitchens, back in the seat of his family No. 15, launched into the lead at the outset and thwarted the repeated advances of Brett Ballard in the race’s second half.

A close call for Hitchens took place when a lapped car spun in turn three. He clipped the spinning vehicle with the back of his car and continued on for the win.

A down-to-the-wire 12-lap Little Lincoln event featured a five-car battle for the win, with Joe Tracy prevailing for the win over Ronnie Wilson, Kirk Lawson, Jordan Herdeck and Matt White.

Next up for the Bob Hilbert Sportswear Short Track Super Series Fueled By VP is the ‘Hard Clay Open’ at Orange County Fair Speedway in Middletown, N.Y., Round No. 1 of the Halmar International North Region, on Saturday, April 8. A practice will take place on April 7.

Georgetown Speedway roars back into action on Thursday, May 11 with the Super Late Models racing for $4,000 to win in a Tri-Track Challenge with Winchester (Va.) Speedway and Potomac Speedway in Budd’s Creek, Md. Also on the card are RUSH Crate Late Models, Delmarva Chargers and Delaware Super Trucks.

COLD QUIPS: Despite the chill, and Friday snow showers, the show went on for the Melvin L. Joseph Memorial. The Modified feature was completed by 4:30 p.m., with the entire program in the books in just over three hours….

Pre-race favorite Stewart Friesen suffered a miserable outing, first slowing with a flat right-front tire and later a broken front-end after contact while racing back through the field. Friesen left Georgetown and headed south to a NASCAR Camping World Truck Series test at Martinsville (Va.) Speedway….

A broken drive shaft exiting pit lane for his heat race sent Jordan Watson to the consolation. He carefully advanced 21 positions through the 49-lap main….

A mix of engine combinations were present in the Modified field, with Brett Kressley winning a heat race utilizing a spec engine….

The state of New York was well represented in both the Modified and Crate 602 Sportsman fields….

Did Not Start: Todd Miller.