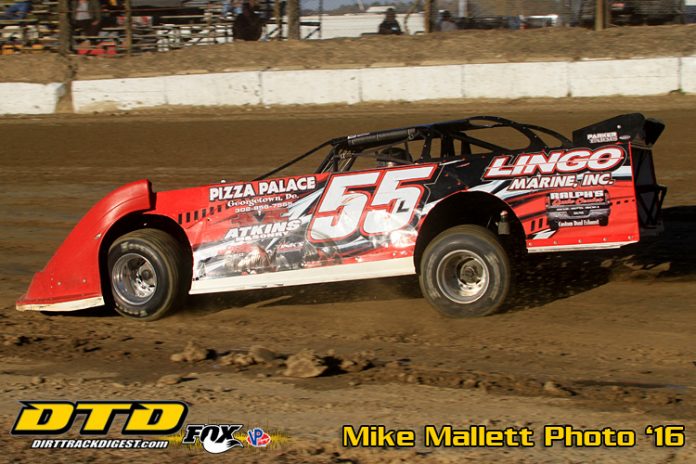 GEORGETOWN, DE – For the first time in nearly two months, the gates to Georgetown Speedway swung open on Tuesday night for a three-hour open practice session.

Approximately 25 drivers, representing a number of divisions, hit the half-mile clay oval during the evening.

With the ‘Tri-State Challenge’ on tap next – Thursday, May 11 – paying Bob Hilbert Sportswear Super Late Models $4,000 to win, some of the division’s top names were on hand to prepare for the upcoming 40-lap event.

Austin Hubbard of Seaford, Del., shook down his potent No. 11 and gave the Georgetown surface two thumbs up.

“No complaints at all,” Hubbard said after the evening’s final session. “It was smooth and we only slowed down two-tenths (of a second) from the first session to the last one, when we went out with old tires.


“Man, this place is fast,” he added with a smile. Hubbard plans to compete in both the Super Late Model and accompanying RUSH Crate Late Model events next Thursday at Georgetown.

“There’s a lot of hype around next week’s race,” Hubbard said. “The place looks great. I think it will be big.”

First State talent Kenny Pettyjohn, who embarks on a very limited schedule, took advantage of the track time as well.

“The track was nice, slick and smooth,” Pettyjohn said. “Tracks like this make racing fun for me.”

Turning his first laps of the 2017 season in a Bernheisel-built car was C.J. Faison, whose business commitments have kept him out of the cockpit. Faison was pleased with the performance of his new ride.

In the Modified division, Robert Dutton made his debut in a “throwback” car dedicated to his late father, who passed away in 2016. Crate 602 Sportsman standout Jordn Justice piloted a second Keith Coulbourne-owned car outfitted with Justice’s normal L&J Sheet Metal outer tin. Coulbourne’s regular driver Kevin Sockriter piloted the other No. 55 with big-block power.

Attention now turns to the ‘Tri-State Challenge’ on Thursday, May 11. Bob Hilbert Sportswear Super Late Models headline the program in a 40-lap event paying $4,000 to the winner and $400 to take the green flag. RUSH Crate Late Models ($1,000 to win), Delaware Super Trucks and Delmarva Chargers complete the program.

Complete rules and event info for the May 11 show can be found at the following link: http://www.thegeorgetownspeedway.com/?page_id=687