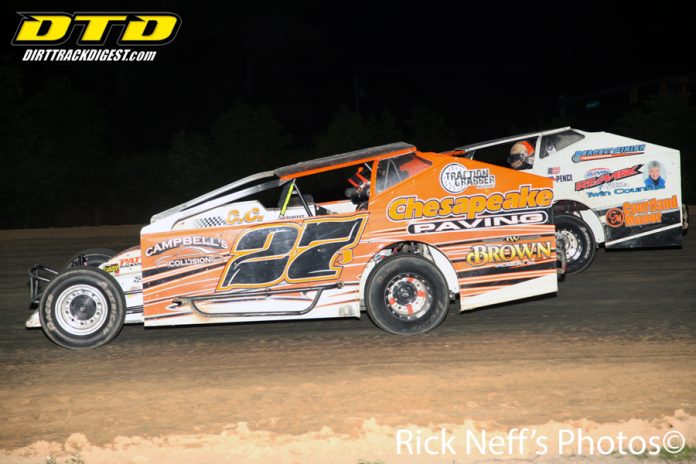 GEORGETOWN, DE – During an action-packed, star-studded six-feature match card, Northeast invaders were able to steal the show and flex their muscle on a spontaneous Monday in the First State.

And yes, that was not a typo.

Dirt-track racing on a Monday night at Georgetown Speedway.


On a night designed to make-up the recent motorsports rain-outs in the mid-Atlantic region, which included last weekend’s weather marred Tri-State Challenge (a three-race series hosted at Georgetown Speedway, Potomac Speedway and Winchester Speedway), Georgetown opened their gates to not just a stout field but also a huge attendance turnout.


Hailing from Rochester, N.Y., ‘The Doctor’ Danny Johnson utilized his heat win and pole position to rocket him into the winner’s circle at Georgetown, capturing the checkered flag in the 25-lap big-block/small-block Modified feature after making the long haul south.

Johnson, 57, triumphed after leading wire-to-wire, holding back challenges from Delaware hotshoe Jordan Watson in the opening stages and veteran Ryan Godown in the final laps.

“It is a long trip down here for me,” a smiling Johnson said. “We debated on coming down here, and now I’m glad we did. It was sure worth the while as now we get to take some pictures in the winner’s circle. Our car worked really well. Starting up front helped me a ton.”

Jordan Watson pressured Johnson during the race’s caution-free first half before his night came to an untimely end. A blown engine forced his No. 1J off the backstretch and drew the yellow.

Duane Howard, driving the Norm Hansell No. 357 small-block, briefly inherited second, before Godown powered around his outside to take the runner-up spot. Ringoes, N.J.’s Godown chased Johnson to the finish, placing a car-length back in second with John Chemidlin’s famed No. 747.

Kingsley, Pa.’s Hollenbeck, who has competed in various Super Late Model events across the United States, started the event from the pole position and wasted no time marching to the triumph; also clinching a starting position in the August 17 World of Outlaws Craftsman Super Late Model Series ‘Fulton Bank 40’ event at Georgetown.

Not to mention, this was his mere debut at the half-mile dirt track.

“Georgetown puts on a heck of a show. The fan base here is just unbelievable.”

Georgetown’s Robinson hustled to a second-place finish after clearing Hubbard. Robinson worked the inside of Hollenbeck on two occasions, ultimately earning the runner-up position. Hubbard, Amanda Whaley and Donald Lingo Jr. with a late surge filled out the front five.

Chip Disharoon, a graduate of the go-kart ranks, won a thrilling 20-lap RUSH Crate Late Model feature. The event marked the first-ever RUSH-sanctioned program in the history of Georgetown Speedway.

Disharoon fended off one of the best on the race’s final lap. Austin Hubbard, pulling double-duty on the evening, took over second place with two laps to go. Hubbard chased Disharoon across the line.

“I’ve got to thank Ricky Elliott for the help with the car,” Disharoon said. “I was trying to go easy there at the end.”

Hubbard fell shy of a win in second, followed by Matt Hill who took over third on the last lap, Joey Warren and Mike Wharton.

Tyler Reed was a victory contender until losing an engine on the final lap. He fell to 11th.

Justice had a final shot at Hitchens when the yellow flew on lap 19. He settled for second, with Brett Ballard (recovering from an early trip to the rear of the field), Nick Alberti and Ryan Riddle.

Despite the late addition of Monday’s event, a very healthy crowd took in the program….

Shawn Ward walked away from a violent incident in Modified qualifying when he struck an infield tire in turn one. A break was taken following the incident to ease sun-glare issues….