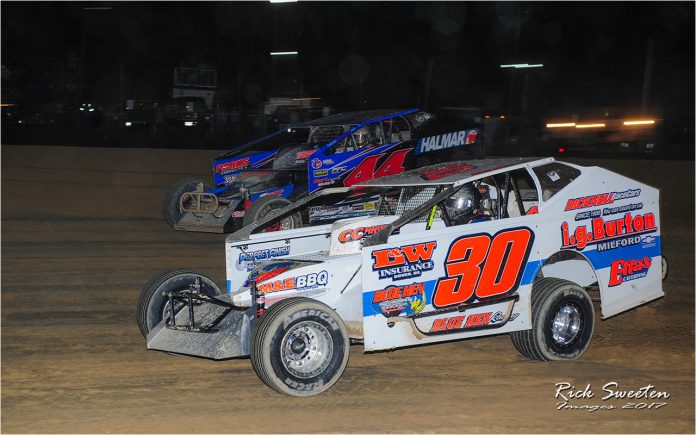 After an accident earlier in the afternoon at Dover International Speedway during the NASCAR Camping World Truck Series event, Stewart Friesen jetted south to Georgetown Speedway for the Deron Rust Memorial.

The outcome was a stirring 13th-to-first drive in the 33-lap big-block/small-block event at the half-mile clay oval, worth $3,396. The victory was the third of Friesen’s career at Georgetown.

“We had some bad luck earlier today (in the Dover event), but it’s awesome to turn it around here,” Friesen said after exiting his Halmar International No. 44 Teo-Pro car. “This is so much fun coming down here to race.”

Friesen picked the worst available redraw position – 13th – and rolled off inside the seventh row for the event run in memory of popular racer and former Georgetown promoter Rust.

At the outset, Jamie Mills launched off the pole to grab the lead with New Jersey legend Billy Pauch Sr. in tow. Pauch, however, saw his effort derailed on lap seven with driveline issues on his retro No. 15.

Friesen found the outside to his liking, roaring through the second half of the top-10, then slicing through the top-five only to pull into the runner-up spot, behind Mills, at the race’s one-third mark.

What ensued was a fan-pleasing cat-and-mouse battle between Mills and Friesen for nearly 20 laps.

During the long green-flag stretch, Friesen pulled ever-closer to Mills, working the high and low lanes. Ultimately, on lap 28, while battling through lapped traffic, Friesen darted to Mills’ inside through turns one and two.

Mills powered back to the lead on the backstretch as Friesen momentarily slowed behind a lapped car. However Mills’ No. 30 drifted wide in turn three, allowing Friesen to take the top spot and lead the race’s final five laps.

“It was intense racing there for a while,” Friesen said. “It’s always better to be second going into lapped traffic.”

Mills, of Milford, Del., settled for second in his first ride aboard a brand-new family fielded No. 30 Bicknell.

“Tonight was the first time out with this car,” Mills said. “I was getting loose at the end. He was a little better than we were at the end. Finishing second to Stew is nothing to hang your about.”

Broomall, Pa., driver Jim Britt turned his tough start to 2017 around with a steady drive to finish third. Wade Hendrickson of Lawrenceville, N.J., made his first Delaware start of ’17 a successful one, guiding the Craig and Leslie Pondish-owned No. 6 small-block to fourth. Joseph ‘Jo Jo’ Watson of Milford, Del., completed the front five in a second Mills family entry.

Filling out the top-10, respectively, were Howard O’Neal of Lincoln, Del., H.J. Bunting of Milford, Del., up from 14th on the grid; Shawn Ward of Hurlock, Md.; Richie Pratt Jr. of Sewell, N.J., recovering from a heat-race incident; and Robert Dutton of Lincoln, Del., in a car paying tribute to his late father, Harry.

Scott Hitchens of Dagsboro, Del., went three-for-three in L&J Sheet Metal Crate 602 Sportsman competition, taking a $600 victory in the 20-lap event. Hitchens, after starting deep in the heat-race field, picked the outside pole for the main event. He first thwarted the advances of Brett Ballard, who tangled with a slower car and spun off the top of turn three, and later Connor King, who chased Hitchens to the finish.

Following Hitchens and King across the line were Jeremy Harrington, Ballard and Steven Kemery.

In a competitive 12-lap Delaware Super Truck main that was slowed by just a single caution, Robert Smith picked up the victory. Shane Clogg pressured Smith to the finish as the leaders crossed the stripe nose-to-tail. David Smith, Dale Elliott and Brian Meisenholder completed the front five.

From dead last – 12th – on the grid, Scott Calhoun topped the 12-lap Delmarva Charger main event. Calhoun emerged from a wild, four-car skirmish for the lead and held off a final-lap challenge from Jay Sipple. Completing the top-five were Robert Paczowski, Tanner Marvel and Derek Swafford.

A skirmish during the second heat race eliminated perennial Georgetown contender Jordan Watson for the remainder of the night and left several teams scrambling for repairs to make the consolation and main events….

Emilee Mills was named Ms. Georgetown Speedway for 2017 in a pre-race ceremony in front of the crowd….

A late surge of fans and pit-area attendees rolled onto the Georgetown grounds following the NASCAR activities at Dover….