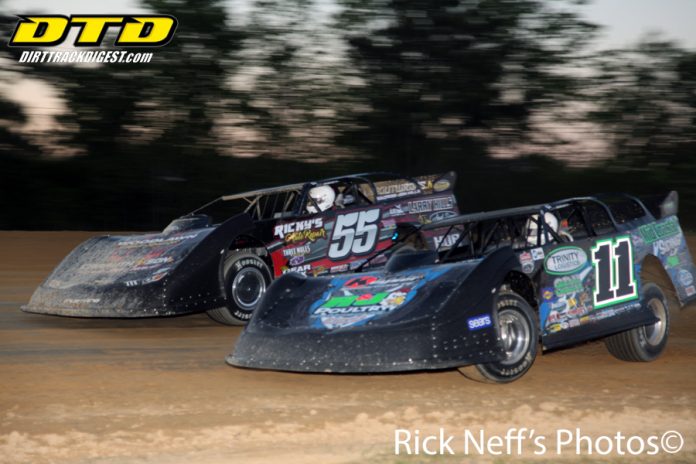 Hubbard earned $3,500 for his efforts in the Independence Day Summer Classic event, becoming the third winner in as many nights for the mini-series, which began at Bedford (Pa.) Speedway on Friday night and moved to Winchester (Va.) Speedway on Saturday before embarking on the First State Sunday.

A series-high 24 Super Late Models signed in for the second appearance of the season by the division at Georgetown. A swiftly run show, including qualifying and five feature events, was completed by 9:54 p.m.

Hubbard, driving his Rocket XR-1 No. 11, drew the outside pole for the 35-lap feature and made the most of his good fortune, as he paced the entire distance comfortably over eventual runner-up Ross Robinson.


“Brett Deyo has done an amazing job with this race track and I feel fortunate to be here tonight,” Hubbard said before the large crowd in Victory Lane.
“We went with a softer tire and it helped with the restarts. There were a lot of good cars tonight.”

Robinson, who lives virtually across the street in Georgetown, Del., settled for second, fending off the advances of sixth-starting Dale Hollidge of Mechanicsville, Md. Delaware driver Amanda Whaley and Pennsylvania’s D.J. Troutman filled out the front five.

Heat winners were Hubbard, Whaley and Robinson. Mark Pettyjohn was the fast qualifier in time trials.

David “Sparky” White topped the companion 20-lap RUSH Crate Late Model event, earning $1,776. White felt significant pressure from Joey Warren in the race’s final laps. Warren worked to the inside of White on several occasions and attempted to pull even in a drag race to the checkered flag.

However, White’s Elliott Farms-backed No. 16 raced to the stripe first.

“Joey didn’t make that one easy on me,” White said. “I’m thrilled to get the win tonight with all these cars here.”

Following White and Warren across the line were Cory Lawler, Derek Magee, and Hubbard who had been as far back as 16th in the race’s early going.

Dwayne Heck dominated the Southern Delaware Vintage Stock Car Club 12-lap main and promptly announced during his interview in the winner’s circle that his car is for sale!