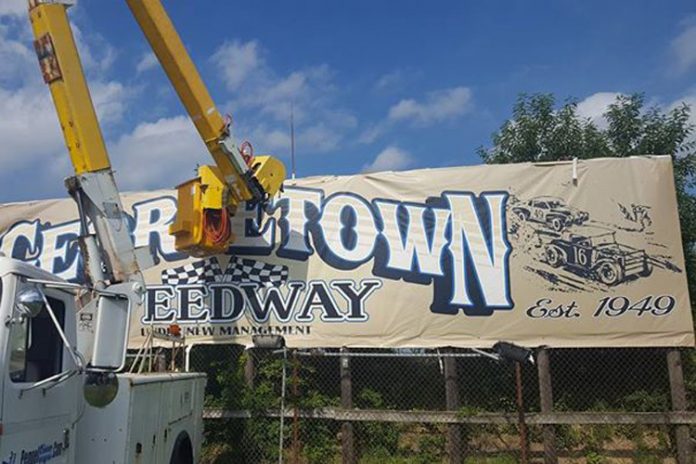 Crews have been at work since July 5 and once again, the historic Delaware oval is ready to go!

“I have so many people to thank for getting the facility back in shape,” Georgetown Speedway promoter Brett Deyo said. “It was overwhelming at first looking at the extent of the damage, but there were several who offered their help and here we are.

“We couldn’t have been ready to race Friday without the help of Jake Marine, William Mears, Alan Ellingsworth, Penuel Sign Co., Lou Johnson and Paul Tomaszewski. It’s been non-stop, but we are better off now than we were before.”


Two headline divisions are on the agenda when racing returns to Georgetown this Friday.

The “fan-favorite” Sprint Car-Modified combination is set to tackle the historic half-mile clay oval for the season’s second Friday night program. The lightning-quick 360 Sprint Cars of the United Racing Club (URC) make their only 2017 appearance at Georgetown, sharing the spotlight with big-block/small-block Modifieds in a $2,500-to-win, 25-lap main event.

The evening has also been designated as ‘Youth Night’ at the speedway. All those under the age of 12 will be admitted into the grandstand free of charge!

A Bicycle Giveaway is also on the evening’s agenda.

Legendary Bobby Wilkins, a driver who represented the First State by racing and winning across the Northeast, will be recognized during the night, as well.

Blue Hen Dispose-All, based in Millsboro, Del., serves as the night’s presenting sponsor.