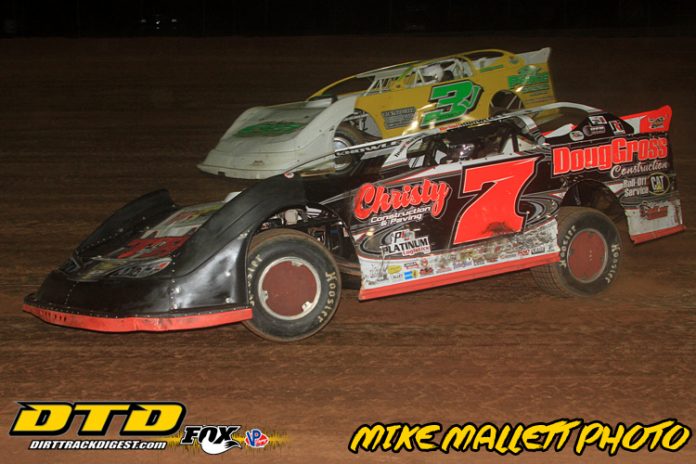 PULASKI, PA – After a two-year hiatus, the Sweeney Chevrolet Buick GMC RUSH Dirt Late Model Series powered by Pace Performance will have Touring Series events in the Mid-Atlantic region for the first time since 2015. The former “Mid-Atlantic States Classic” swing will be re-branded as the “Battle of the Bay” and expand to three nights of racing, April 19-21, that will open up the 2018 Touring season at Georgetown Speedway (Thursday), Potomac Speedway (Friday), and Winchester Speedway (Saturday). Each event will be a “Marquee” distinction with $2,000 to-win plus a $150 travel package will be available for each competing top 12 driver in 2017 Sweeney Tour points with details to be released at a later date.

Sister speedways, Potomac and Winchester, just completed their fourth season of being under the RUSH weekly-sanctioned program. Potomac, which is located south of Washington, DC, runs the RUSH Late Models on Friday night, while Virginia’s Winchester has been one of RUSH’s highest consistent weekly car count tracks in recent years. Both tracks are owned by Greg Gunter and managed by Denise Hollidge. Those tracks produced two of RUSH’s 2017 champions with Logan Roberson winning the $5,000 Sweeney Weekly Series title and Devin Brannon capturing the “Futures Cup” crown.

The growth of RUSH Late Models at Potomac and Winchester in recent years allowed RUSH to expand into Delaware with Delaware International Speedway joining as a weekly-sanctioned track in 2017. Delaware, which had prior run GM 602 Crate Late Models, saw their counts increase under RUSH with an average of 19 per event in 2017. With Delaware International’s announcement of weekly RUSH-sanctioned racing, Georgetown’s promoter, Brett Deyo, jumped on the growing RUSH program as he sanctioned his three Crate Late Model races in 2017 under RUSH, and those successful events attracted between 21-23 cars.

“I can’t think of a better way to kick-off our 2018 RUSH Touring Series than with a three-night swing through the Mid-Atlantic with all three events paying $2,000 to win,” stated RUSH Director Vicki Emig. “The bed of RUSH racers that are now in that part of our region is incredible and they have been continuously asking us and the speedways to have the opportunity to compete in a Touring event. We’ve even had several of our racers ask about putting a weekend in the Mid-Atlantic together. To now have three back-to-back-to-back Touring events before any of our other RUSH-sanctioned speedways open their seasons is certainly going to be conducive to creating a scenario for some tremendous racing between RUSH racers across the spectrum. We have to thank Greg, Denise, and Brett for making this possible.”


The former “Mid-Atlantic States Classic” debuted in 2014 when Rick Singleton swept the events at Potomac and Winchester topping 22 and 27-car fields respectively. In 2015, it was Walker Arthur sweeping the Potomac and Winchester events as the car counts climbed to 26 and 34 respectively. The last completed Sweeney Tour event in the Mid-Atlantic was on June 13, 2015 when Allen Brannon won the “Crate Racin’ USA Nationals”. Due to some scheduling conflicts, no events were scheduled in the Mid-Atlantic in 2016. This past season, the Sweeney Tour was scheduled to open the season at Winchester on April 22, but rain forced the cancellation.

Bryce Davis won his first Sweeney Tour title this past season and will collect his hardware on January 20 at Gatherings Banquet & Event Center along with the other top 12 points-paying racers. The remainder of the 2018 Sweeney Tour schedule is being worked on as dates continue to be finalized.

Deyo enters his third year at the helm of Georgetown Speedway- the historic half-mile clay oval in Georgetown, Delaware. Deyo signed a three-year lease that runs through 2019 and improvements continue at the Sussex County track, which hosted its first race in 1950. The speedway operates on a special-events-only schedule with high-profile programs from March through October. For more information on Georgetown, check out their website at www.thegeorgetownspeedway.com. You can like their Facebook page at www.facebook.com/GeorgetownSpeedway and follow them on Twitter @thegtownspdwy.

Potomac Speedway is a high-banked 3/8-mile dirt track located on Route 234 at 27963 Budds Creek Road, Mechanicsville, MD 20659. The track first opened in 1973, and is located about an hour south of Washington D.C and Baltimore. For information, check out their website at www.potomacspeedway.com or call 301-481-8855. You can like their Facebook at www.facebook.com/PotomacSpdwy and follow them on Twitter @PotomacSpdwy.

Winchester Speedway is also a high-banked 3/8-mile dirt track located just off Route 50 at 950 Airport Road Winchester, VA 22604. The track first opened in 1936 under the name of Airport Speedway. The track has been home to the Winchester 200, a major Super Late Model event, since 1963! For more information, check out their website at www.winchestervaspeedway.com or call 301-481-8855. You can like their Facebook at www.facebook.com/wincvaspeedway and follow them on Twitter @Wincvaspeedway.