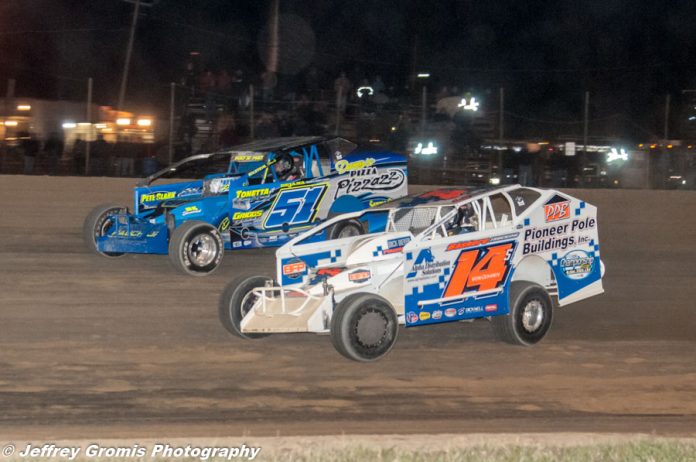 GEORGETOWN, DE – Craig Von Dohren kicked off the 2018 season on a high note capturing the Northeast opener for 358-Modifieds on a chilly night at the Georgetown Speedway.  Von Dohren was able to pocket $4049 for his triumph.

“I just had to get there,” said Von Dohren in victory lane. “Jeff (Strunk) was running real good, then I was able to clear Jeff and get to work on Billy (Pauch Jr.) a bit. I just crossed him and got a good run down the backstretch, held him up a little in three and four.”

Jeff Strunk and Billy Pauch Jr., led the strong field of 358-Modifieds to the green for the 30-lap war. Pauch Jr., jumped out to the lead on the initial green, with Strunk and Von Dohren duking it out for second. After swapping the spot repeatedly, Strunk broke free and took off after Pauch, but a lap 10 yellow for a spinning HJ Bunting made that task easier.

On the restart, calamity ensued in turn two with Pauch Sr., Ryan Watt, Danny Johnson and many others piled up to bring out the red flag.


After another lap and a quick yellow, Jamie Mills went for a violent barrel roll down the frontstretch to bring out the red on lap 11. Others such as Pauch Sr. and Andy Bachetti spun, all were able to avoid Mills’ flipping machine.  Mills escaped injury. Pauch Jr., held the lead restart after restart, but couldn’t do it any longer. A top to bottom move netted Von Dohren the lead as lap 13 was scored.

One final yellow on lap 14 for Danny Bouc spinning reset the field, but Von Dohren took off.

The battle for second was wild the remainder of the event, with Pauch Jr., up top and Duane Howard down low. As those two battled, Von Dohren slowly pulled away.

“I don’t know how good we were after that,” Von Dohren noted. “I just had to hit my marks and here we stand in victory lane. I don’t know, it felt good after the heat race, but it was a little wetter then. We made a couple changes, not much, but maybe we found some stuff to carry over to the big race tomorrow.”

Von Dohren went to triumph at Georgetown for the second time in a small-block with his last coming way back in 1997.  Pauch Jr., was able to hold off Howard for second.  Howard finished third with Umbenhauer, and Stewart Friesen completing the top five.