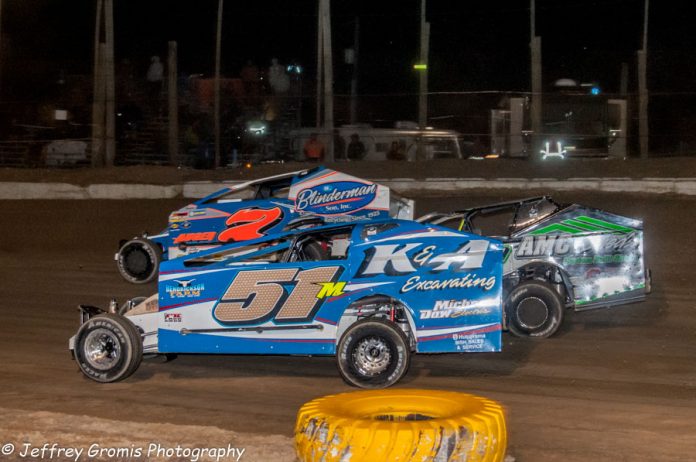 GEORGETOWN, DE – The dirt-slinging action of the Bob Hilbert Sportswear Short Track Super Series Fueled By Sunoco Velocita-USA South Region will be making its way to a television near you in 2018. Short Track Super Series officials announced Thursday that the 5th Annual Blast at the Beach on Tuesday, August 28 at Georgetown Speedway will be broadcast via a tape-delayed broadcast on MAVTV.

This will be the first nationally-televised broadcast in the five-year history of the Short Track Super Series.

“I believe the Short Track Super Series offers some of the best racing anywhere,” said Short Track Super Series Promoter Brett Deyo. “We have talented racers and passionate fans. Having the Blast at the Beach broadcast on MAVTV will showcase our style of racing across the entire country and put the rebirth of Georgetown Speedway in the spotlight.”

The 5th Annual Blast at the Beach won’t feature beach balls and sand castles, but it is expected to feature 35 exciting laps of Big-Block/Small-Block Modified racing as drivers compete for the $5,000-plus top prize.

The Short Track Super Series attracts some of the biggest names in Dirt Modified racing with the likes of Matt Sheppard, Stewart Friesen, Danny Johnson, Billy Pauch and Jimmy Horton competing in events throughout the Northeast and Mid-Atlantic regions.


Georgetown Speedway is a half-mile dirt oval with progressive banking located in Georgetown, Del. The track was voted by race fans as the 2017 Short Track of the Year during Speed51.com’s annual 51 Awards.

Airdates for the Battle at the Beach on MAVTV will be announced at a later date.

Georgetown Speedway has been in operation since 1949 and is not only a historic landmark in Delaware, but is well-known across the country for its role in the development of stock car racing as it is known today.

The Bob Hilbert Sportswear Short Track Super Series Fueled by Sunoco for Big-Block/Small-Block Modifieds enters its fifth season in 2018 with an ambitious schedule of events across the Northeast and Mid-Atlantic, competing in New York, New Jersey, Pennsylvania and Delaware. The Short Track Super Series is managed by Brett Deyo of BD Motorsports Media LLC, who is also the administrator of the American Racer Cup presented by Sunoco and promoter of Georgetown Speedway in Georgetown, Del.

Owned and operated by Lucas Oil Products, MAVTV is a television network with its roots deep in the automotive world. MAVTV offers an unparalleled line-up of exclusive motorsports that includes prestigious events such as the Chili Bowl, The AMA Pro Motocross series, the Lucas Oil Challenge Cup and more. But MAVTV goes far beyond the national mainstream events and also covers multitudes of grassroots series’ from across the globe: Drag boats, sprint boats, drag racing, pro pulling, drifting, dirt racing, ice racing and everything in between.