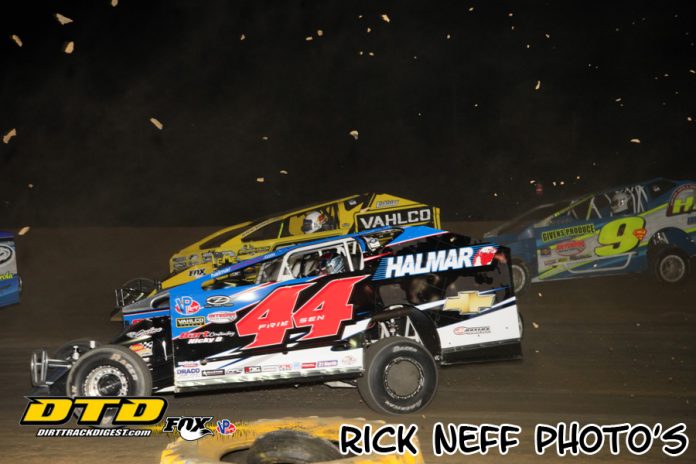 And both Stewart Friesen and Ross Robinson were thankful.

A dramatic shift in weather saw off-and-on rain throughout the day followed by high winds and frigid temperatures. Georgetown Speedway management opted to press on with the night’s program and pushed the event through rapidly.

Friesen pocketed a huge $6,111 payday for his Sunoco Modified winning effort aboard the Halmar International No. 44.

Friesen started the event from seventh. Out front, Jordan Watson fired off the outside pole to set the pace. Three-wide racing through the field was prevalent early on as Friesen made a run toward the front.

On lap seven, Watson’s No. 1J drifted wide in turns three and four, allowing Friesen to take over the top spot.

Meanwhile, Craig Von Dohren was making his own spirited drive from 16th on the grid in Dick Biever’s No. 14s.

Von Dohren burst into second on the 12th lap, setting up an epic battle for the lead.

CVD used the extreme outside lane to not only catch Friesen – but pull even with him on the exit of turn two on lap 21. Friesen repelled the advance and Von Dohren swapped lanes looking to the inside.

On lap 23, Von Dohren slipped off the top of turn three and ninth-starter Ryan Watt moved into second. Watt, too, reeled in Friesen before a final yellow slowed the event on lap 26.

Friesen fired off the double-file restart and cruised to the victory.

Bill Lawson presented Friesen with $111 for leading lap 11 in memory of his son, Opie Lawson.

Boyertown, Pa.’s Watt finished a solid second in the Ron Roberts-owned No. 14W, followed by Von Dohren, of Oley, Pa., who settled for third. Milford, Del.’s Watson recorded a fourth-place effort and Anthony Perrego of Montgomery, N.Y., charged from 22nd to finish fifth in Brian Smith’s No. 44. Perrego was forced to qualify through the consolation after MSD issues in his heat race.

It was an emotional victory for Robinson, who bested his girlfriend, Amanda Whaley, and best friend, Matt Hill, in a First State podium sweep of the talented field.

“It means a lot to win here at home,” Robinson, who lives just miles from the speedway, said. “I’ve got to thank Daniel (Hudson) for letting me run his car in these races.”

Robinson started outside pole and took over a lead he wouldn’t relinquish at the start of the main. Heavy lapped traffic in the race’s final third allowed Whaley to close from roughly a straightaway back when the checkered flew.

Millsboro, Del.’s Whaley continued her RUSH Late Model success at Georgetown by placing runner-up. She won the Season Opener weekly series event on March 16 to kick off the season.

Hill, of Georgetown, Del., finished a solid third with Max Blair of Centreville, Pa., in fourth and Logan Roberson of Waynesboro, Va., completed the front five.

GEORGETOWN NOTES: A forecast for sun and wind deteriorated quickly, with rain showers moving over the speedway mid-morning and again in the afternoon. Track crews worked to run in the speedway and racing started right on time…

A late-arriving, hearty crowd took in the event which featured the first-ever RUSH Dirt Late Model Series event at Georgetown….

Track conditions remained smooth and wide with passing prevalent throughout all the main events….

Racing resumes at the speedway on Friday, May 4 with the Deron Rust Memorial for the Sunoco Modifieds paying $3,396 to win for 33 laps of racing plus the RUSH Late Models, L&J Sheet Metal Crate 602 Sportsman, Southern Delaware Vintage Stock Cars, Delmarva Chargers and Delaware Super Trucks.

Due to the NASCAR activities at nearby Dover International Speedway, a later start time will be in effect.