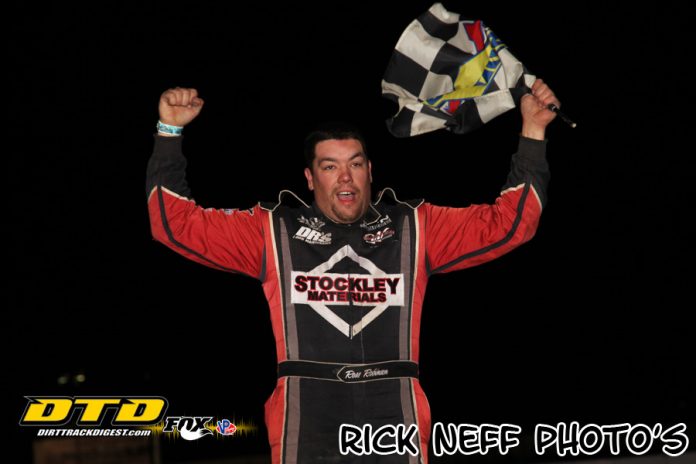 On Wednesday night, Ross Robinson held off his girlfriend, Amanda Whaley, for third at Delaware International Speedway. Fast forward 24 hours and it was Robinson fending off a last ditch effort by Whaley to win 20 miles up the road at Georgetown for his first career Sweeney Tour victory. In fact, Robinson’s best friend, Matt Hill, finished third giving “First State” racers a podium sweep for the first time in the history of the Series. Robinson earned $2,000 and took over the “Battle of the Bay” point lead after two of four nights.

“If you don’t wear your heart on your sleeve and put your heart into this you might as well not do this,” expressed the emotional 27-year-old winning racer who lives a mile from the Speedway. “I always catch flack that I’m a big baby. I’ve done this since I was seven and there’s nothing else I want to do so when we have success it means a lot. I’ve been trying to win one here at home for God knows how long. I go to dinner a lot with (promoter) Brett (Deyo) and always tell him I’m going to take his money, but he’s made a liar out of me until now.”

“This is Daniel’s car of DMH Farms,” explained Robinson. “He wanted to get back into racing and wanted some help. He helped me out and bought my car when I needed to get rid of it to get something else. We put a deal together where I take care of it and help him when he needs me. He lets me run races like these. I have to thank Logan, Chase, my parents, my grandparents, Amanda- the list goes on and on. I’ve gotten my butt kicked running the bottom before so I know not to do it. She’s (Amanda) good enough so if you give her an inch she’s going to take a mile. I couldn’t give her bragging rights when we go home. If she’d have won, I’d have been just as happy.”


Robinson used the outside to power past K&N Dash winner, J.J. Mazur, on the start for the lead in the 30-lap feature, while Whaley moved by Darrell Bossard for third. Whaley pressured Mazur and was able to drive under him in turn four on lap four for second. By now, Robinson opened up a half-straightaway lead over Whaley. Mazur then felt the heat from Bossard as the northern racers battled side-by-side for third on laps six and seven before the event’s first caution when Cory Lawler spun with seven laps completed.

When racing resumed, Mazur got too high in turn four allowing sixth starting Matt Hill to fly into third with Bossard, Max Blair, and Logan Roberson all following past Mazur. Five laps later, Joe Warren’s good run ended when he spun running seventh. When green replaced yellow, five cars got stacked up in turn one, which would be the final caution as the last 18 laps went green-to-checkered.

On lap 14, Blair moved to the outside in turn two to pass good friend Bossard for fourth. Roberson hounded Bossard until finally making the pass on the outside of turn two as well on lap 23 to move into the top five. Robinson maintained his half-straightaway lead on the big half-mile until he caught traffic on lap 27. Whaley really began to chew into the lead in the closing laps and made a final ditch effort driving hard into turns and four on the final lap, but would come up just 0.395 of a second shy of Robinson’s DMH Farms/Classic Lawn/Penske by JDS/Nash Transport-sponsored #11D.

Whaley earned $1,000 for runner-up and sits in third in the “Battle of the Bay” points just four points behind her boyfriend Robinson. “I wish we would have caught lapped traffic a little sooner- the wild child might have come out in me a little bit,” expressed the 23-year-old Millsboro, DE driver. “I thought about that top on the last lap, but there was a lapped car up there. If I was going to lose to anyone I’m glad it’s him (Robinson). We’ve been struggling here lately so the fact that we went forward and not backwards is positive so I’m looking forward to the rest of the week. I have to thank my dad who puts all the money into this. There’s a lot of product sponsors that came on board this year that I can’t thank enough.”

The final five laps saw an intense battle for third as Hill was able to cap off a great run closing out the Delaware podium for his best career Sweeney Tour finish. Blair edged out Roberson for fourth to maintain the Sweeney Tour point lead, but trails Robinson by two in the “Battle of the Bay” standings. Roberson was fifth for the second straight night.

Jason Knowles set fast time in $100 FK Rod Ends “Shock the Clock” Qualifying over the 40-car field with a lap of 19.956. Knowles would add $25 more for winning the first FK Rod Ends heat race, but would get caught up in a feature accident and was awarded the TBM Brakes “Tough Brake of the Night” recipient. Wednesday night’s “Tough Brake of the Night” recipient, Bruce Hordusky, Jr., was able to fend off Damian Bidwell to garner the fifth and final transfer spot in heat two and was selected as the Dirt Defender “Defensive Drive” award winner.

The Sweeney Tour will resume action on Friday night (April 20) at Potomac Speedway in Mechanicsville, Maryland for the first time in four years in night three of the “Battle of the Bay” presented by Pancho’s Racing Products. Pits open at 4 p.m. with the drivers meeting at 7, warm-ups at 7:30 followed by qualifying and heat races.