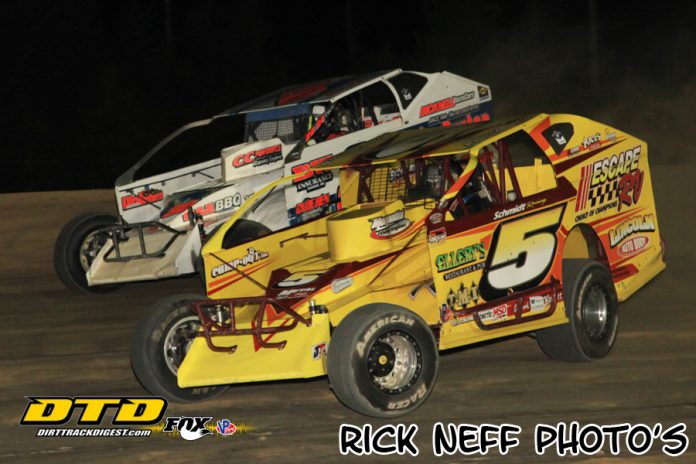 When Pennsylvania’s Big Diamond Speedway canceled its program in the late morning, Godown loaded up Dieter Schmidt’s No. 5 Lincoln Auto Body car and headed south to Delaware. The Ringoes, N.J., driver made his long haul worthwhile with a $3,396 victory in the Deron Rust Memorial Sunoco big-block/small-block Modified event at the Sussex County oval.

The Deron Rust Memorial is run annually to honor a former racer turned promoter and diehard supporter of racing at the Georgetown oval. Rust passed away before his time in March 2013.

Godown picked the pole for the main via a redraw of top qualifiers, but it was a high-running Joseph Watson who took the lead with the wave of Warren Alston’s green flag. Watson held command through lap four when he slid wide on a restart, allowing Godown to take command.


Fifth-starter Van Horn – in the Fred Vahlsing-owned No. 323ov – powered into second position with a three-wide, inside move shortly thereafter setting up a cat-and-mouse duel out front.

Godown found the banked high lane to his liking while Van Horn was glued to the inside groove.

As each lap clicked off the duo raced in tandem while dicing for the lead.

Past the halfway point, Van Horn picked up the pace and drew even with Godown on multiple occasions as lapped traffic came into play.

A final caution on the 30th circuit set up a three-lap dash to the finish.

Godown couldn’t shake Van Horn, but held him at bay by a car-length to earn his first victory of the 2018 season.

“David might have had a little better car tonight,” Godown said. “I feel really good about this (Lincoln Auto Body) Troyer car. We’re getting a handle on this car. We were watching the weather this week and made a plan to come down here if Diamond rained out. It all ended up working out for us.”

Van Horn, of Harmony, N.J., was a disappointed runner-up after setting fast time during hot laps earlier in the night to earn his way into the redraw.

“So close,” Van Horn said. “Ever since the banking was added over the winter, this place really suits my driving style. We’ve been fast here, but I need to break through and get a win.”

Mike Gular of Boyertown, Pa., drove the Terry Fasnacht-owned No. 2A from sixth to finish a steady third. Gular showed speed on the final restart, working the high lane to challenge the lead pair.

A field of 29 Sunoco Modifieds took part in the event with heat wins going to Neal Williams, Gular and Brandon Grosso. The consolation event was scrapped.

Van Horn (19.279) and Brett Kressley (19.387) had transferred directly to the redraw by turning the quickest two laps in warm-ups.

Georgetown’s own ‘Thrill’ Matt Hill returned to the winner’s circle at his hometown track following the 20-lap RUSH Late Model main. Hill, who has battled bad luck in his starts at Georgetown in recent seasons, turned his fortunes around with a $1,000 top prize.

Hill started second and emerged from an early battle with Kerry King to take the lead. Later, Joey Warren provided a formidable challenger to Hill through a series of restarts before Hill drew away in the final laps.

Roberts worked through a three-wide scramble inside the race’s final laps to earn what was ultimately the lead when Jeremy Harrington was penalized to the rear of the lead lap cars for a jump of the final restart.

Roberts rolled into Victory Lane over Dwayne Crockett, who had started ninth and charged toward the front. Completing the top-five were Connor King, Stephen Kemery (with a deflating right-front tire) and Ryan Riddle.

Geoff Carey fell six inches short of a Delmarva Charger win in his most recent appearance at the track. He didn’t let it happen again. Carey of Georgetown thwarted the repeated advances of Chris ‘Tippy’ Martinez to take the win with Ashley Merritt in third.

DERON RUST NOTES: The Rust family again turned out to support the event. Irene and Duane Rust donated a kids bicycle and tablet which were given away during the program. Several other incentives were distributed to racers during the special evening….

Sunoco Modified attrition was high before the main event. Billy Pauch and Ryan Watt were both eliminated in heat-race incidents, while engine issues sidelined both Danny Bouc and Matt Stangle. Watt’s night was especially trying as his hauler broke down en route to the speedway….

Despite a later scheduled start time of 7:45 p.m., the Modified main event took the green just minutes after 10 o’clock….

Keith Hoffman and Jay Baxter led track prep with the absence of longtime speedway employee Lou Johnson, who was recuperating from surgery on Monday….

Did Not Start: Robbie Walls.

Did Not Start: Jon Burton.