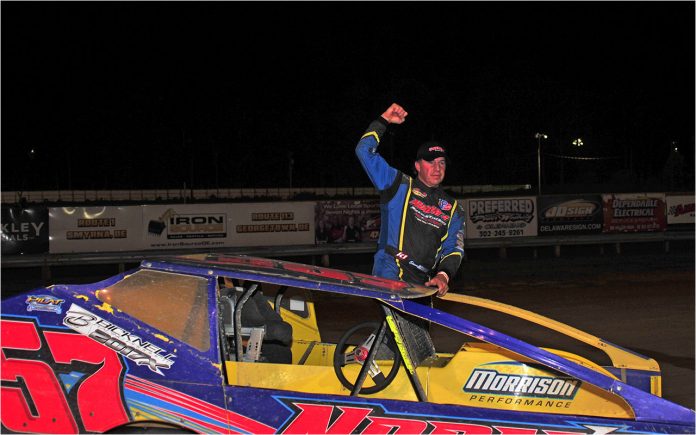 GEORGETOWN, DE – Duane Howard and Amanda Whaley shared the spotlight before a packed house on Friday night at Georgetown Speedway.

Howard, of Oley, Pa., drove to his first win of the season at the Sussex County half-mile oval in the 30-lap Sunoco Modified feature, while First State native Whaley found Super Late Model Victory Lane in the 25-lap main. Both drivers earned $3,250 for their efforts.

The night’s events were presented by Blue Hen Dispose-All of Millsboro, Del. The spacious Georgetown facility was stretched to its limits with a standing-room-only crowd and 106 race cars in the pits.

Howard, in the Norm Hansell-owned No. 357 started fifth in the Sunoco Modified event. At the wave of Warren Alston’s green flag, it was Jordan Watson getting the best of his brother Joseph to take command on lap one.

Howard was a quick mover. By lap two, he had arrived in second.


“We had a good car right from the start,” Howard said. “Gaining those positions on the first few laps set us up. Our car could go anywhere, top, bottom, I could even roll the middle.”

Jordan Watson’s No. 1J was hooked up on the outside lane of the speedway and he held the advantage over Howard in the race’s caution-free first 15 laps.

A yellow on lap 17 ultimately changed the race’s complexion.

Howard was able to edge a nose ahead of Watson entering turn one off the double-file restart. Off of the second turn, Howard edged ahead to take over the lead.

The last caution of the race flew on lap 22. During the final green-flag run, Watson reeled Howard back in and looked to the inside coming to the checkered.

Howard picked up the win by less than a car-length, while Watson, of Milford, Del., earned a $2,000 runner-up finish, his best of the season at Georgetown.

David Van Horn of Harmony, N.J., authored another steady drive to fill out the podium in Fred Vahlsing’s No. 323ov.  From 16th on the grid, veteran Jimmy Horton of Neshanic Station, N.J., sliced through the field to finish fourth in the Halmar International No. 43. Modified upstart Matt Stangle, also out of Neshanic, N.J., completed the front five in a solid effort.

Millsboro, Del.’s Whaley has been red-hot in the area’s Super Late Model ranks and she continued her success Friday night with a dominant and popular victory.

Whaley started the main from fourth position. Pennsylvania invader Jason Covert picked the pole via the pre-feature redraw and shot into the lead at the outset of the main.

Covert paced the first four laps before Whaley, who was throttling the topside, swept into a lead she would never relinquish.

Prior to the final yellow of the event on the 21st lap, Whaley had opened up a lead of more than a straightaway.

“We’re on a roll right now,” Whaley said after climbing to the roof of her family owned Richard D. Whaley Concrete No. 4. “All this winning is good for Dad’s bank account.”

Covert, of York Haven, Pa., finished second in a rare Delaware appearance. Covert said he wanted laps on the speedway prior to the World of Outlaws Craftsman Late Model Series ‘Fulton Bank 40’ on Aug. 16.

Austin Hubbard found the outside lane late in the race and finished third, followed by Donald Lingo Jr. and Nick Davis.

King started the feature from ninth position. Hotshoe Scott Hitchens fired off the outside pole at the start. Hitchens led the first 11 laps of the main before his car dropped off the pace on the backstretch. He headed to the pit area and turned over the lead to King, who had driven to second.

Making his first start of the year at Georgetown, Greg Humlhanz started seventh and made a late rally to finish the runner-up. Jason Rush had his best outing of 2018, placing third, ahead of Steven Kemery (up from 10th) and Ryan Riddle, who started 12th.

The 12-lap Little Lincoln feature was a thriller. Landy Adams of Seaford, Del., fought tooth-and-nail with Kirk Lawson. Adams and Lawson raced back-and-forth using the entire speedway. On the final lap, Lawson drove hard into turn three and over the embankment.

Adams, who got a late start to the season, got the win over Tracy, Jordan Herbert, Matt White and Ryan Walsen.

After a run of second-place finishes, Geoff Carey prevailed in the 12-lap Delmarva Charger feature. Carey stretched out his edge in the final laps over Chris “Tippy” Martinez, Mod Lite star James Hill (in the Jerry Barker No. 21), Robert Paczkowski and Ashley Merritt.

Racing resumes at the speedway on Thursday, August 16 with the ‘Fulton Bank 40’ for the World of Outlaws Craftsman Late Model Series paying $10,000 to win plus Little Lincolns, Delaware Super Trucks and Delmarva Chargers.

Ricky Elliott made his debut in a new No. 58 Modified in addition to his Super Late Model. Elliott wasn’t able to start the Modified main and had issues in the Late Model main….

Ron Roberts rode out a nasty flip in Sunoco Modified qualifying when he clipped a spinning Brandon Grosso. Undeterred, the 68-year-old Roberts started the main in a back-up car….

Ross Robinson fought apparent fuel issues throughout the night. Despite his No. 7 Super Late Model skipping, he drove from last to sixth….

An electrical issue kept Craig Von Dohren from starting his Sunoco Modified heat race. Von Dohren tagged the back of the feature in 24th and despite dropping off the track in turn three finished eighth….