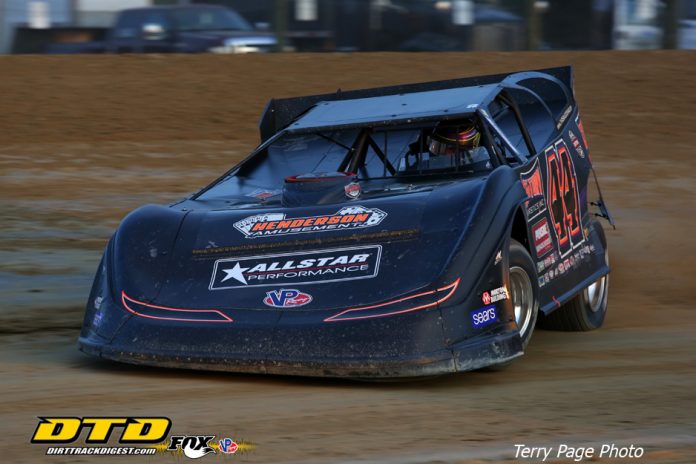 GEORGETOWN, DE – The first of a four-race weekend started out just as planned for Series points leader Chris “Smokey” Madden, as he picked up his seventh victory of the season Thursday night at the Georgetown Speedway. In short, Madden was strong throughout the event. Winning his heat race and re-drawing the outside pole, he took the lead on lap one of the feature and never looked back, leading every lap of the Fulton Bank 40 on his way to another $10,000 payday.

“Got a good start there to get the lead. That was a big deal for sure,” Madden said. “We knew coming into tonight that qualifying and starting position was the main thing to winning this race, and we definitely lined everything up the way we needed to get us a victory here tonight.”

The race went 34 straight green-flag laps before the only caution of the race came out for Brent Larson, who shredded a right-rear tire in turn four. The field was re-stacked, and second place Rick Eckert was once again placed on the rear bumper of Madden.

Eckert had been chasing down Madden since the drop of the green, but his efforts were unsuccessful. Madden said he knew the pressure was behind him but was actually relieved to see the caution come out because it put him back in clean air. He continued on to say he’s actually lost races trying to get through slower traffic.


Coming into Thursday, Madden held a very slim Series points lead over Mike Marlar and defending Series Champion Brandon Sheppard. With this win, he extended that lead ever so slightly to 32 points over Marlar and 40 over Sheppard.

Madden said he knows how important this weekend is to his championship hopes, but also said he won’t stress over trying to win it.

“I told my guys and made a statement before we left the shop that these four races were going to be a huge swing for us,” Madden said. “If we could come up in this area and run good and still be in contention to win the points, it would absolutely be huge for us.”

“We’re doing what we need to do to win a championship. Like I told my family at home, I’m going to give it the best I got,” Madden continued. “I’m going to have fun doing it, I’m not going to stress over it. I’m going to enjoy it, and if we win it, we win it. If we don’t, hey, it is what it is.”

Rick Eckert posted the best finish of his 2018 campaign with a second-place effort. Spending the entire race chasing down Madden, in what seemed like a 40-lap game of follow the leader, Eckert wasn’t able to get out to the lead at the drop of the green, despite re-drawing the pole and winning his heat race. But he said his car was about the same as the leader’s.

Eckert is a York, Pennsylvania, native who has had lots of previous experience at upcoming tracks like the Williams Grove and Port Royal Speedways. But he doesn’t get the opportunities to race on them as often as he used to, being on the World of Outlaws tour.

“I always like racing near home because it’s not very far to drive,” Eckert said. “It’s not necessarily an advantage, because I haven’t raced at home in, like, 20 years.”

However, he said his confidence level is high, which gives him equally high hopes for a successful weekend out in the Keystone State.

“Confidence-wise, we’ve been running better, and we’ve changed a bunch of stuff on our car and it felt pretty decent tonight,” Eckert said. “Hopefully, that translates good into tomorrow.”

Brandon Sheppard dove into this weekend with yet another podium finish, placing third on Thursday night with a car that he said was strong all event long.

“The track wasn’t as racy as we wanted it to be, so you had to start up front,” Sheppard said. “All-in-all, we were pretty happy with everything. As long as we can keep it up front all weekend, we’ll be satisfied.”

Like Eckert’s efforts to catch Madden in traffic, Sheppard had his own waves of lapped traffic to deal with in his quest to run down second-place finisher Rick Eckert, whom he ran behind the entire race.

Going into this weekend third place in Series points, Sheppard said he has the ultimate faith in his team and driving abilities.

“My confidence in my team and my car is really high,” Sheppard said. “This car is fast every time we break it out. My team’s got my back, no matter what, so I’ve just got to get up on the wheel and get the job done, night in and night out.”

She may not have been in the battle for the lead, but Amanda Whaley picked up the KSE Hard-Charger Award and was fastest non-Outlaw in the field for the feature. Being the only female pilot in the field, she showed that it doesn’t have to be an ultra-tacky surface to pass cars, as she went from 11th to sixth over the course of 40 laps on a track surface that gave a lot of drivers headaches.

“I just made moves when people moved up out of the groove and was just luckily there to capitalize on it,” Whaley said.

Whaley has been in competition with the Outlaws before, and thus has gained a bunch of crucial experience and tips from the best in the business – a lot of which she used on the track Thursday night.

“Tonight, it was just kind of ‘don’t leave the bottom,’ but I have learned how to drive some just by watching videos of them and racing with them,” Whaley said. “I went down and talked to [Eckert] about some setup stuff and Mark Richards, so you definitely learn a lot from being around them.

Mike Marlar won his sixth PFC Brakes Fast Qualifier Award of the season and 15th of his career with a lap time of 18.511. A total of 26 cars were in attendance for three heat races which saw Rick Eckert, Brandon Sheppard and Chris Madden each take a victory in their respective races. The Last Chance Showdown was won by Ross Robinson.

On Friday, August 17, the tour makes its historic return to southern Pennsylvania’s Williams Grove Speedway – its first time back since the inaugural year of 1988! The last and only winner of a World of Outlaws race at the facility was Larry Phillips. Who will be the first to stamp their name on the modern era wins list?