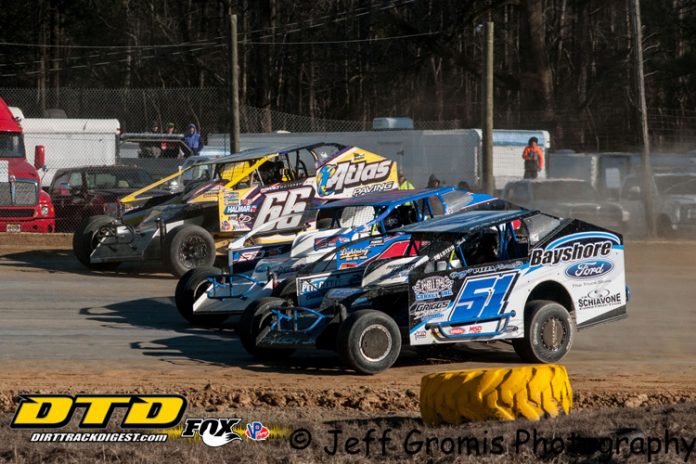 The fifth annual ‘Blast at the Beach’ presented by VAHLCO Racing Wheels turns the attention of Northeast and Mid-Atlantic race fans to the Georgetown banked half-mile track for an historical night. The cameras of MAV-TV will record the action for broadcast for the first time in series – and track – history.

The night’s event is headlined by a 35-lap big-block/small-block Modified main paying $5,500 to win, $1,000 for 10thand $400 to take the green flag plus a plethora of special awards and bonuses.

This is the fifth of seven events on the STSS Velocita-USA South Region, with $10,000 awaiting the champion at year-end. Currently, Waterloo, N.Y.’s ‘Super Matt’ Sheppard, a two-time South Region winner this season, sits atop the standings. He has never won a Short Track Super Series crown.

Also on the card is the fourth of five STSS Crate 602 Sportsman South Region events ($1,000 to win for 20 laps), Delmarva Chargers and Delaware Super Trucks.

Prior to the STSS Modifieds taking the green for their 35-lap main, drivers will participate in qualifying heat races and consolations. The top-two finishers from each of the heat races will draw for their starting positions in the 5-lap Jones Racing Products What Drives You® Dash. This Dash offers $500 to win, $300 for second, $200 for third and pays all participants a minimum of $50. Most importantly, the finish of the Dash sets the feature starting lineup.

On top of the $25,670 first-to-last posted STSS Modified payout, lap leaders in the ‘Blast at the Beach’ 35-lapper will receive $10 each from Hurlock Auto & Speed Supply.

A host of cash, certificate and product awards will also be up for grabs, not to mention Ray-Ban sunglasses courtesy of Design for Vision and Sunglass Central to the top-three finishers.

STSS Sportsman battle for a $1,000 winner’s share plus $10 to lead each lap thanks to Earth Movers LLC. Like their STSS Modified counterparts, Ray-Ban sunglasses will be distributed to the top-three finishers from Design for Vision and Sunglass Central!

There is a rain date for this event of Wednesday, August 29.

The ‘Blast at the Beach’ is a co-promotion involving BD Motorsports Media LLC and driver Eric Kormann.