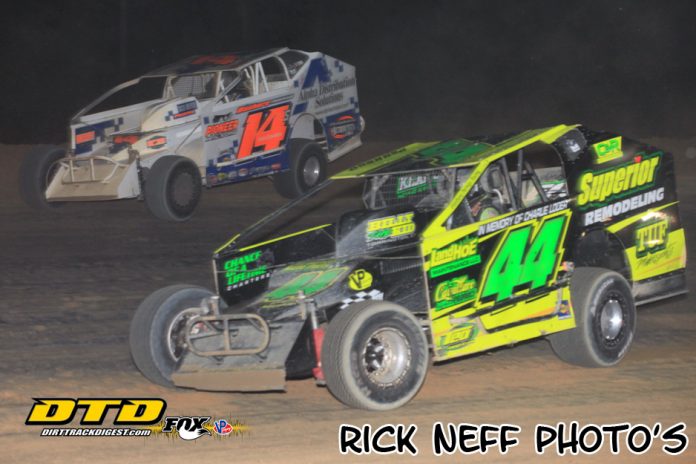 For Middletown, N.Y.’s Perrego and the Superior Remodeling team, the victory was his first of 2018 on the STSS and third career Georgetown victory.

“I didn’t know if I had anything for Craig (Von Dohren),” Perrego said after climbing to the roof of his Teo-Pro car and receiving the one-of-a-kind surfboard trophy. “When he went off the bank, I knew I had my chance if I hit my marks.”

Perrego pocketed $6,070 for his efforts including lap money and a $500 winner’s bonus posted by Holly Hill Farms.

A special 5-lap Jones Racing Products What Drives You® Dash set the first eight starting positions for the STSS Modified main event. Rick Laubach won the dash in the Ryan Kerr-owned No. 1K and led the field to Warren Alston’s green flag.

Once in front, Von Dohren raced masterfully at the front of the field, while rim-riding around the top of the speedway.

Laubach, meanwhile, anchored the second-place battle through lap 19 before Perrego, who started from ninth, utilized a restart to rally into second.

Perrego chased Von Dohren through a race-changing moment on lap 28. Von Dohren’s car momentarily crested the speedway’s banking, breaking his momentum and allowing Perrego to shoot into the lead.

Hard on the throttle, Von Dohren looked to correct his mistake by chasing down Perrego.

On the final lap, entering turn three, Von Dohren drove hard into the corner, pulling a slide-job on Perrego. CVD momentarily held the lead, but as his car washed up the track, Perrego crossed to the bottom and reclaimed the top spot en route to the checkered as the crowd rose to its feet.

Oley, Pa.’s Von Dohren was a disappointed runner-up finisher, collecting $3,000 from the payout and an additional $250 in lap money.

“I got over the top (of the track) there and it cost me,” Von Dohren said.

Methodically moving forward on the low groove while many competitors utilized the top side, Duane Howard of Oley, Pa., finished third in the Norm Hansell No. 357 after starting 10th. Howard praised the multi-grooved racing surface and ability to make moves through the field.

After starting 24th following rear-end and carburetor issues early in the night, David Van Horn of Harmony, N.J., charged through the field to claim a hard-fought fourth-place finish and the Hard Charger Award which consisted of $200 cash from Precision Hydraulic & Oil, a $50 VAHLCO certificate, a $200 Beyea Headers certificate and a $50 QA1 certificate.

Van Horn was added to the field as the third-place finisher in the consolations with the fastest lap time, an additional starter sponsored by Ken Bruce of Bill Brown & Company Inc.

Ryan Watt of Boyertown, Pa., thrilled the crowd by driving back to fifth-place after overturning his Ron Roberts-owned car on the 19th lap in turn three, firing the engine and rejoining the field.

Finishing sixth through 10th, respectively, were Matt Sheppard of Waterloo, N.Y., who pitted with brake issues early in the race but rallied back to finish sixth in the Hurlock Auto & Speed Supply No. 9s; Ryan Godown of Ringoes, N.J., in the Lincoln Auto Body No. 5; 20th-starter Brandon Grosso of Montgomery, N.J.; Danny Bouc of Pipersville, Pa., who rolled off the grid 19th in the Craig and Leslie Pondish No. 6; and Ryan Krachun of Branchburg, N.J.

Sheppard was the overall fast timer in hot laps earning $100 cash from Beyea Custom Headers with a lap of 19.757 seconds.

Frankford, Del.’s Scott Hitchens took home $1,000 in the L&J Sheet Metal Crate 602 Sportsman What Drives You® 20 event, race No. 4 of the STSS South Region. Hitchens appeared destined for a runner-up finish to New York invader David Schilling until a red flag on the 17th lap of the event.

Hitchens shot to the bottom of Schilling on the 18th lap. Entering turn three, real estate ran short and Schilling dropped off the top of the speedway, while Hitchens motored to the $1,000 win.

Tom Moore Jr., fresh off a victory on Saturday at Bridgeport (N.J.) Speedway, finished second. Joe Toth of Newtown, Pa., climbed from 20th on the grid to finish third, with Delaware’s David Jenkins and Schilling, of East Greenbush, N.Y., in tow.

A wild flip on the second lap of the STSS Modified feature saw Brett Kressley get turned off the backstretch and into the tree-line. The Orefield, Pa., driver fortunately walked away uninjured….

Rear-end issues sidelined Billy Pauch Jr.’s Daniel Sommeling No. 51 during the 5-lap Dash. The ‘Kid’s Kid’ started the feature in a second car from the Hurlock Auto & Speed stables….

Joseph Watson impressively won a heat race but couldn’t start the 5-lap Dash due to a broken header. His team worked to make repairs and he started the main….

To combat 90-degree-plus heat, track crews applied extra moisture to the speedway. Once the track was run in, conditions provided three-wide racing throughout the night….

Next up for the Short Track Super Series is the seventh Halmar International North Region Modified event at Thunder Mountain Speedway in Center Lisle, N.Y., on Sunday, September 23 with the ‘Lightning on the Mountain’ paying $5,000 to win for 50 laps. Also on the card are STSS Crate 602 Sportsman ($1,000 to win) and Street Stocks.

Did Not Start:
T.J. Williams