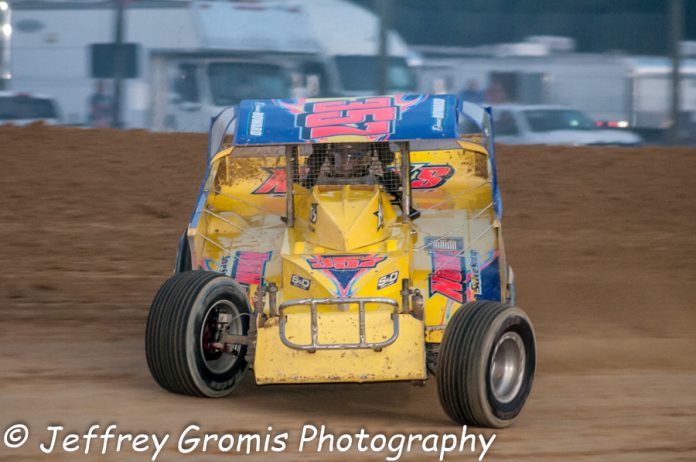 Oley, Pa.’s Howard took home $3,000 for his second big-block/small-block Modified triumph of the season in the 30-lap event, while Weller annexed the URC Sprint Car event, run as a 27-lap feature in honor of Sprint Car legend Greg Hodnett, who lost his life in an accident Thursday night in Central Pennsylvania.

The Georgetown Speedway pit area was packed to overflow with a new Friday record of 124 race cars on hand.

Howard, driving Norm Hansell’s No. 357, started from the pole via a redraw of top qualifiers. But it was far from a green-to-checkered romp for the veteran driver.

During the race’s first half, Howard was pressured heavily by Billy Pauch Jr., making his first start in Rick Holsten’s No. 96 open small-block, and Craig Von Dohren aboard the Dick Biever-owned No. 14s.


An intense three-car battle raged as David Van Horn, who started eighth, closed in from fourth and the leaders encountered lapped traffic.

At lap 13, Pauch Jr. found the high line to his liking, as he swept past Howard to take the lead at the line. His time out front was short-lived when Howard battled back on the bottom.

A lapped car got sideways and collected both Pauch Jr. and Von Dohren, ending their runs.

Through a series of restarts in the final dozen circuits, Van Horn pressured Howard heavily, but couldn’t complete the pass.

Howard kept his wave of momentum rolling after a $25,000-plus victory six days earlier in the Freedom 76 at Grandview Speedway in Bechtelsville, Pa.

“I can’t say enough about this team,” Howard said afterward. “We’re on a roll right now. I want to ride the wave as long as we can.”

Van Horn, of Harmony, N.J., earned a $2,000 runner-up finish, continuing his strong performances at the half-mile oval this season.

Brandon Grosso of Montgomery, N.J., rode the rim to a strong third-place finish after starting in 10th position. Grosso made a run at the leaders in the final laps.

After starting 23rd and suffering an early race flat tire, Ryan Krachun of Branchville, N.J., rallied for a Georgetown-best fourth-place finish. Milford, Del.’s H.J. Bunting III started 21st and completed the front five as the highest-finishing First State driver. Bunting ran as high as third in the Jake Marine-owned No. 85 before showing smoke during the final two circuits.

Mertztown, Pa.’s Weller entered the night with a single-point edge in the URC Sprint Car point championship battle. After 27 laps, he extended that advantage over rival Curt Michael by winning the main event.

Weller started fifth on the field and moved quickly into third by lap six. On lap eight, he moved into second. One lap later, he utilized a double-file restart to sweep by pole starter Justin Barger to the lead.

Once out front, Weller darted through lapped traffic with relative ease for the win.

In Victory Lane, Weller dedicated the win to Hodnett and his family and friends.

Montrose, N.Y., native Barger made his Georgetown debut a strong one, finishing second, followed by J.J. Grasso, Adam Carberry and Modified star Ryan Watt, who was making his first-ever Sprint Car start in the Tim Hogue-owned No. 39.

Delaware star Curt Michael blew a right-rear tire on lap seven and quietly worked back to seventh in the Bill Gallagher-owned No. 5G.

Toth, a standout driver at New Egypt (N.J.) Speedway, launched from the pole and led Hitchens past the halfway point. As Toth ran the cushion, Hitchens worked the inside lane, ultimately completing the pass.

It was far from over, however.

In the final two laps, Hitchens slowed his pace in traffic. Toth wound his car up and made a hard charge, falling less than a car-length shy of the win.

Following Hitchens and Toth across the line were Greg Humlhanz, Steve Kemery and teenager Alex Yankowski.

Georgetown’s own Ross Robinson continued his dominance of the Southern Delaware Vintage Stock Car Club 12-lap main event driving the Mark ‘Coot’ Williams-owned No. 26. Robinson cleared Freddy Brightbill in the early laps and powered away from the field.

Like their Super Truck counterparts, the Delmarva Chargers ran their 12-lap feature without a caution. Jerry Barker got out front and cruised to the victory. Ashley Merritt, Chris ‘Tippy’ Martinez, Robert Paczkowski and Joe Waters.

Rough outing for Danny Bouc who won the third Sunoco Modified heat convincingly and was collected twice in opening lap skirmishes, the second of which caused his Craig and Leslie Pondish-owned No. 6 to overturn….

The URC Sprint Car teams sported ‘Hodnett’ on their wing in memory of the Sprint Car legend….

Ad-Art Sign Company of Georgetown sponsored a $250 Hard Charger Award for the URC event won by Christopher Allen, who started 18th and finished ninth in the 27-lap main….

Track conditions were racy and tacky for the entire night’s racing. The large amount of cars led to a 7:45 p.m. start time. The whole program, however, was completed in two hours and 57 minutes….

Due to the record participation, speedway management opted to start all 27 L&J Sheet Metal Crate 602 Sportsman and an increased field of 26 Modifieds…. 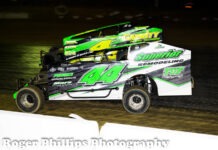 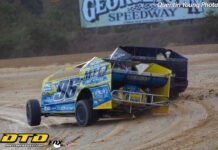