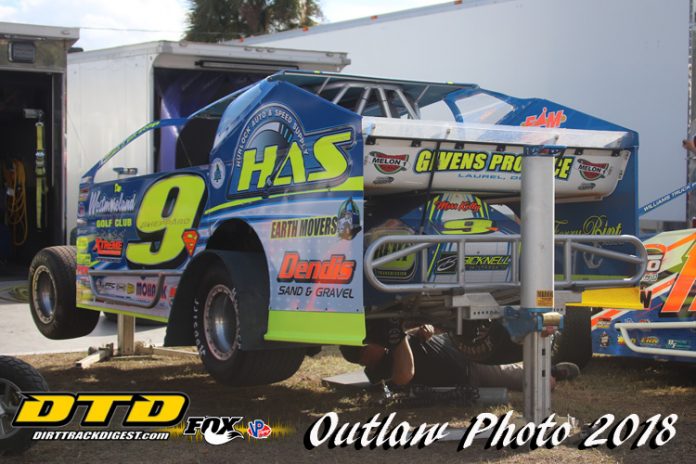 GEORGETOWN, DE – A light, persistent rain fell for much of the evening and into the night on Friday. But no one would have never known it by the end of Saturday night at Georgetown Speedway.

Seventy-two race cars filled the pit area at the Sussex County half-mile track for Open Practice, taking laps on a smooth and tacky racing surface. The BD Motorsports Media LLC management team announced the 72-car turnout as the largest-ever for a pre-season practice in four years promoting the historic speedway.

A robust crowd also turned out to watch the three-hour test and tune which ended under the lights.

The total count was led by the L&J Sheet Metal Modifieds with 18 cars in the pit area. Local driver Kevin Gardner of Rehoboth Beach, Del., set the pace with a time of 19.623 seconds. Joseph ‘Jo Jo’ Watson at 19.636 and New Jersey’s Sam Martz at 19.741 completed the top-three.


The Chesapeake Paving Crate 602 Sportsman presented by J.W. Brown Trucking brought 15 cars to the track. After Sammy Martz Jr. led the way for the first three sessions, Tom Moore Jr. of Smyrna, Del., ended up setting quick time for the night with a lap of 21.173 seconds over Martz (21.294) and Matt Smith (21.315).

Sunoco Super Late Models were represented by three drivers including Donald Lingo Jr., Ross Robinson and Herb Tunis. The fastest lap on record was turned by Tunis at 20.072 seconds.

Delmarva Chargers and Delaware Super Trucks were well represented as the two classes took practice laps together. Among the other divisions hitting the track were Little Lincolns, Southern Delaware Vintage Stock Cars, Outlaw Stocks and single representatives of the Mod Lite and Sprint Car divisions.

On Friday (March 15), Small-Block Modifieds race 30 laps for $4,049 to win. Also on the Friday docket are RUSH Late Models (20 laps, $1,049 to win), Delmarva Chargers and Delaware Super Trucks. Modified and Crate 602 Sportsman will have practice rounds in preparation for Saturday. The drivers recording the fastest lap in each division will earn a Saturday redraw position.

Saturday (March 16) brings the Bob Hilbert Sportswear Short Track Super Series (STSS) Fueled By Sunoco Melvin L. Joseph Memorial for L&J Sheet Metal big-block/small-block Modifieds, a 49-lap event paying $6,949 to win and $490 to take the green. This event serves as Round No. 1 of the STSS Velocita-USA South Region presented by Sunglass Central and Design for Vision.

Also on the Saturday docket: the STSS Crate 602 Sportsman (20 laps, $1,490 to win) in the first race of the South Region plus Southern Delaware Vintage Stock Cars, Delaware Super Trucks and Delmarva Chargers.

Complete Melvin L. Joseph Memorial race information can be found on the speedway website under the ‘Event Info’ tab.

PRACTICE NOTES: The Hurlock Auto & Speed team brought a pair of cars to practice: Shawn Ward, who will return to the L&J Sheet Metal Modified ranks this season, took laps in both his No. 7W and a small-block No. 9s to be run next weekend by Matt Sheppard….

Jordan Watson was visibly one of the fastest cars on hand but had no times recorded with no transponder mounted on his No. 1J. Watson had worked through the 11th hour to prepare the car for practice….

Teenager Anthony Tramontana took the first laps of his Crate 602 Sportsman career on Saturday. After two sessions by himself on the track, Tramontana joined his divisional counterparts and the Vineland, N.J., resident ultimately recorded the seventh-fastest time of the day….

Bobby DeLeon of Somers, N.Y., made his Modified debut Saturday. DeLeon, a Crate 602 Sportsman graduate, installed a small-block engine previously run in a pavement Modified between the frame rails of his DKM No. 27….