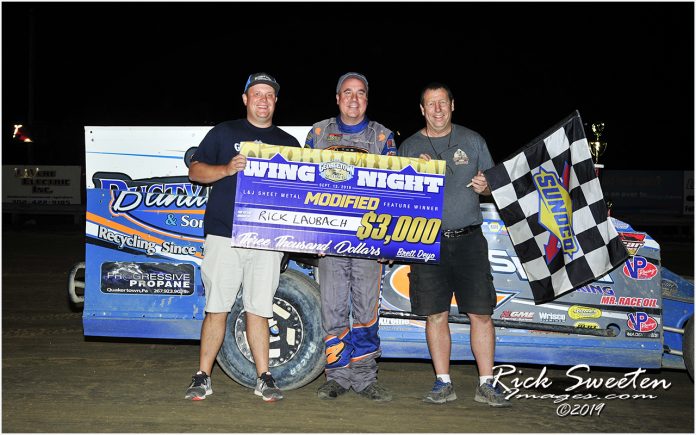 GEORGETOWN, DE – On a night where 108 cars packed the pit area, Rick Laubach stole the show and the $3,000 payday in the first-ever ‘Wing Night’ at the Georgetown Speedway.

For the first time in Georgetown’s history, the L&J Sheet Metal Modifieds utilized sail panels as a part of the special ‘Wing Night’ promotion. A huge Friday night crowd filled the historic track’s grandstands for the special event.

Despite starting on the pole, it was anything but easy for the man known as “Scooby.”

“We just came down to practice really,” an enthused Laubach told the crowd. “But once I drew the pole, I said, ‘We might have a chance to win this thing.’”

Laubach, of Hellertown, Pa., was joined by Neshanic Station, N.J.’s, Jimmy Horton on the front row for the 25-lap main event.

From the drop of starter Joe Kriss’ green flag, the outside lane on the half-mile oval appeared to be the quicker groove. Horton swept around the outside of Laubach on turn four of the opening lap and set sail at the front of the field.

Milford, N.J.’s Billy Pauch Jr., one of the favorites entering the night as the most recent Modified winner at Georgetown, drew 10th out of a possible 10 in the redraw for the feature. It didn’t take long for “The Kid’s Kid” to begin to make moves towards the front.

On lap one Pauch Jr. passed four cars, climbing into sixth and batting Danny Bouc for the top five.

By the time the yellow came out on lap 10, Pauch Jr. had climbed all the way to third.

The lap-10 yellow changed the race, even if those in attendance or watching on Dirt Track Digest.tv didn’t know it. The two ensuing restarts gave Laubach a chance at Horton, who had chosen the outside on the two restarts.

Laubach challenged Horton from the inside row on both restarts, causing Horton to second guess his choice of the outside row.

Following a yellow on lap 13, Horton made the decision to try the inside and that was all “Scooby” needed.

“Once I saw he chose the inside, I gave my crew guys the thumbs up, I knew we were gonna be tough from there,” Laubach said.

Laubach raced to the lead on the restart and never gave it back, despite several challenges from Horton in the closing laps.

Pauch Jr. meanwhile, continued to bogged down on the bottom on restarts only to fight back to third, but ran out of time to catch the top-two.

Danny Bouc, of Pipersville, Pa., drove the Craig and Leslie Pondish No. 6 to a fourth-place finish, his best at Georgetown of 2019. Duane Howard, out of Oley, Pa., drove the Norm Hansell No. 357 to round out the top five.

Rounding out the top 10 respectively was Montgomery, N.J.’s Brandon Grosso in sixth, Boyertown, Pa.’s Ryan Watt in the Roberts owned No, 14w coming home seventh. Milford, Del.’s H.J. Bunting grabbed the eighth spot in Jake Marine’s No. 85 car, Dave Dissinger of Mohrsville, Pa., jumped into his No. 88x ride to finish ninth, and Scott Van Gorder of Laurel, Del., rounded out the top-10.

The Capitol Renegade United Racing Club (URC) Sprint Cars made their only appearance of 2019 at Georgetown as a part of ‘Wing Night.’ Josh Weller of Mertztown, Pa., won his second straight URC event at Georgetown.

Weller and Chad Layton, the top two in points, occupied the front row and waged war for 20 laps around the banked half-mile.

Weller grabbed the lead from the jump while Layton tailed him throughout the entirety of the affair. As the two caught lap traffic, Weller’s lead would grow and shrink, but he never relinquished it.

Scott Hitchens of Dagsboro, Del., won his third Chesapeake Paving/J.W. Brown Trucking Crate 602 Sportsman feature of 2019 following an excellent battle with Adam White. The two have battled a lot this season down the road at Delaware International Speedway and they fought it out for the first 10 laps on Friday night.

Hitchens would eventually wear down White and go around on the top side in turns one and two and walk away with his division leading 19th career Georgetown win, worth $1,000.

The Little Lincoln 12-lap feature was won by local favorite Kirk Lawson, who rode the topside to another win. Jordan Herbert and Matt White rounded out the top three.

Robert “Pac Man” Paczkowski, held off a hard charging Chris “Tippy” Martinez for his first Delmarva Charger win of 2019. Brandon Reifler, who led the first 11 laps, rounded out the top three after losing the lead on the final restart.

Next up at Georgetown Speedway will be the season finale for Mid-Atlantic Championship Weekend on Friday and Saturday, November 1-2.