GEORGETOWN, DE – Rich Laubach clawed his way to the front of a hotly contested Modified main, scoring the win in the first post-lockdown event at Georgetown Speedway.

Ryan Watt snuck by Mike Gular in the opening stages of the 33-lap Deron Rust Memorial, with Laubach and Billy Pauch Jr. in close tow. Lapped traffic on the lightning fast half mile hit early, with Watt reaching the tail of the field by lap five. With the heavy traffic, the top four of Watt, Gular, Laubach, and Pauch were all packed together.

With Watt up high, Gular took advantage of a lapped car blocking Watt’s lane to dive low and lead lap eight. In the same breath, Laubach flew to second and Pauch nearly grabbed third. Within a moment, Watt was back to second and at Gular’s door to retake the lead, grabbing the top spot on lap 11. Laubach followed through, knocking Gular from first to third in an instant.

A set of yellows on lap 14 and 15 gave the frontrunners a chance to reset, with Laubach getting a great jump to snag the lead away from Watt. Gular held steady in fourth, while Pauch dipped his right rear off the top of the track and fell back. With clean air, Laubach throttled down and put two seconds between him and Watt, on cruise control until a lap 22 caution.


Danny Bouc snuck by Gular for a moment on the restart, allowing Laubach and Watt to duel. Gular got Bouc to retake third just prior to a final yellow on lap 26, with Laubach and Watt still double file on the front row for the last restart. Watt took a swing at Laubach, but the move cost him second as Gular dove under. While Gular and Watt argued over second, Laubach drove away and grabbed the Georgetown Speedway re-opener, worth nearly $4,000. Gular grabbed second, with Watt, Bouc, and Billy Pauch Sr. completing the top five.

“The new clay here is great, the moisture in the air kept the track changing all night,” Laubach said. “This race is about Deron, one of my old buddies. I saw the old 396 pull out on pace laps – that’s my old car. I definitely miss him, we wouldn’t be standing here without him. I was trying my best to make the bottom work, a couple laps it did and a couple it didn’t, I love trying to commit down there as it’s a little easier on us older guys. The top came around and it was just fun.”

Gular was one of three drivers to lead during the event, pacing the opening lap and later on.

“That’s a great surface they put down,” Gular echoed. “It was right around the outside edge like a real racetrack. I wish I saved some more when we were in lapped traffic and maybe I would’ve had something a little more at the end, but overall it was a great race.”

Watt debuted a new Teo Pro Car with a four link chassis, a successful debut with laps led and a podium.

“We tested this new car down in Deleware a couple weeks ago,” Watt said. “It was a lot better tonight than it was there. The cushion started to fade on entry, and this thing was really good on the top. I got hung up on top there and felt like I basically gave it away, those guys were really good tonight.” 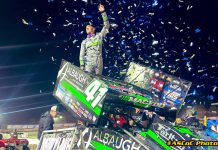 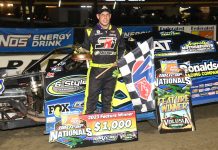