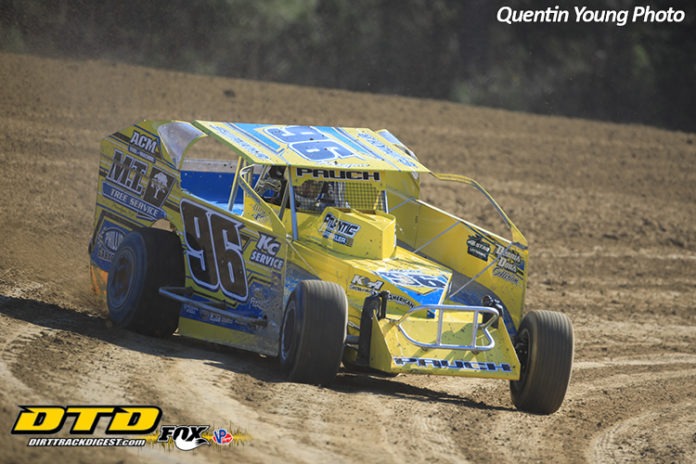 Jordan Watson and Ryan Watt lead the field to the green flag, with Watson jumping out to the early lead.  His lead was short lived however as Ryan Godown moved to the spot just 2 laps into the event on the topside of turn 4.

A yellow flag would fly on lap 4 for the Mark Pettyjon machine which had spun in turn 2.

On the restart, Watson again jumped to the lead, getting by the Godown 26.  But the yellow would quickly fly again for the 6 of Danny Bouc who stopped in turn 2 after contact with Billy Pauch Jr.

When the green flag dropped again it was Richie Pratt who made his presence felt, driving past both Billy Pauch Jr. and Ryan Godown making his way to 2nd.  Unfortunately for Pratt, he would drive into turn 2 just a little to hard on the next circuit and jump the birm, causing him to fall back to the 5th spot.


With 10 laps to go Ryan Godown made his move on the Watson 1j, taking the lead, but Watson’s good run came to an end as he slowed down the backstretch and pulled pitside for the evening.

With Watson off track this put Pauch Jr. in 2nd and he set sail after the 26 of Godown.  In just 2 laps Pauch Jr. closed the gap on the Godown machine and was looking to make a move.

On lap 18 Pauch Jr. put his 96 on the outside of Godown in turns 3 and 4 and powered by to take the lead.  From there it was all Pauch Jr. as he set sail and claimed the victory and $3,000 top prize over Ryan Godown, Ryan Watt, Carson Wright and Dave Shirk

When asked about his race, Pauch Jr state “That was awesome man.  I don’t know about you Delaware fans but I love coming down here and putting on a show.  We were hesitant to come here because we were running Big Diamond, but this car is just…. I don’t know what to say…”

It wasn’t smooth sailing for Pauch, as he did make contact with Danny Bouc early in the event.  “I owe Danny Bouc.  I got along side of him and I thought he saw me, but I guess he didn’t see me and I caught his shock tower.  I guess I owe him about $100 on the shock tower.  I’ll get him a beer tomorrow night.  We’ve ran for years.  I think he knows it wasn’t on purpose”

Did Not Start: Norman Short

Did Not Start: Zac Weller