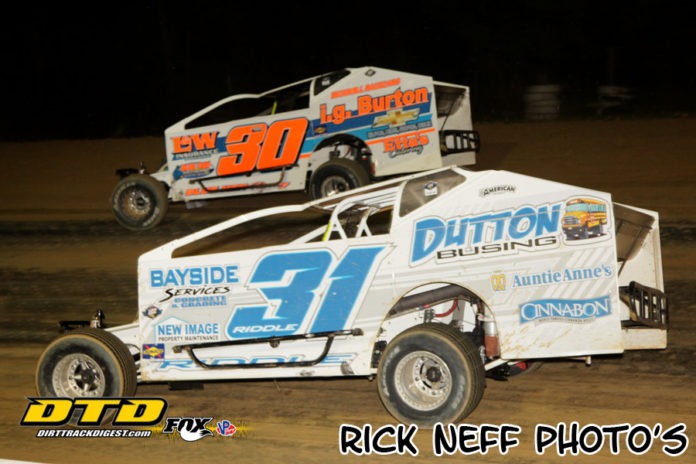 GEORGETOWN, DE – The bad luck streak is over for Joseph Watson.

On Friday night, the Milford, Del., driver righted seasons of misfortune at Georgetown Speedway with a $3,000 ‘September Showdown’ victory in the L&J Sheet Metal 30-lap feature at the half-mile oval. Watson drove the Blue Hen Speed No. 30 to Victory Lane for the first time in the BD Motorsports Media LLC promotional era at the historic facility, which began in 2016.

The pit area was packed with 140 race cars taking part in the program.

“This place has been tough on us,” offered Watson in Victory Lane to a partisan crowd. “We’ve been fast here and had so much bad luck.”

Watson turned back a talented 29-car field of big-block/small-block Modifieds on a heavy track from significant rainfall in the days leading up to the event.

“We made some adjustments after the heat race,” Watson said. “We had a good car in the feature.”

Watson arrived in second on the seventh lap of the main and one circuit later utilized a double-file restart to unseat Pennsylvania star Jeff Strunk, who led from the outset in Glenn Hyneman’s Keystone Racing No. 126.

While Watson set the pace out front, 10th-starter Danny Bouc drew the attention of fans rim-riding around the extreme outside lane.

Bouc, who had driven up to third and dropped back to sixth, re-emerged in the runner-up spot on lap 17, trailing Watson by nearly a straightaway.

As the lead pair negotiated slower traffic, Bouc drew in on Watson, closing to within three car-lengths at the checkered flag.

Watson, however, held on to become the third First State driver to win a Georgetown Modified main since 2016, joining H.J. Bunting and his brother, Jordan.

After starting from the pole and suffering a flat tire on the opening lap, Boyertown, Pa.’s Ryan Watt marched through the field in his Ron Roberts-owned No. 14W to fill out the podium.

Strunk settled for fourth and Rick Laubach of Quakertown, Pa., completed the front five in Ryan Kerr’s No. 1K.

Georgetown Speedway Modified point leader Billy Pauch Jr. was in contention for the lead before suffering a flat tire on Rick Holsten’s No. 96. He climbed from the rear of the field to finish sixth.

Andy Best of Felton, Del., crediting the efforts of longtime mechanic Andy Anderson, picked up the United Racing Club (URC) 360 Sprint Car main event. The URC group brought a stout 23-car field to Georgetown for their only visit of 2020.

Best led laps four and five before turning over the top spot to Tyler Ross. On lap 10, Ross encountered misfortune off the second turn and drew the caution.

Kerry King and his Mello Yellow Cole Trickle No. 51 picked up the Southern Delaware Vintage Stock Car victory over a 26-car field. Art Workman was the first Sportsman car across the line in 10th position.

The Little Lincoln 12-lap main came down to the last turn of the final lap. Joseph Tracy rode the high line past Kirk Lawson to pick up a win that drew a buzz from the crowd. Lawson, Todd Sammons, Matt White and Bunky White completed the front five.

A three-wide drag race to the checkered in the 12-lap Delaware Super Truck feature played into the hands of Shane Clogg, who won by a nose at the line over Jerry Hill. Matthew Smith, Ryan Efford and Nate Benson completed the front five.

Did Not Start: Joe Pete