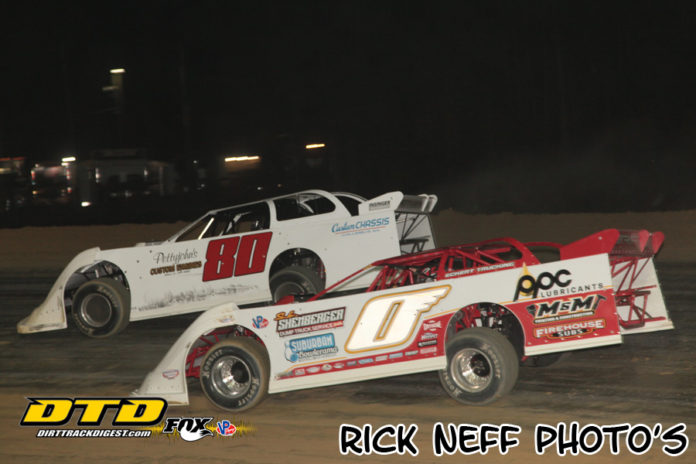 GEORGETOWN, DE – Rick Eckert picked up the feature win in the 40 lap Super Late Model feature on Saturday night at the Georgetown Speedway, earning himself $7,000 for his efforts.

Modified standout Michael Maresca would share the front row with Eckert to start the feature, with Eckert jumping to the early race lead over Maresca as the field hit turn 1 but the yellow flag would fly early for the 0 machine of DeShawn Gingrich who spun on the backstretch.

When the green flag flew again it was Eckert who jumped out to the lead, but all eyes were on the Max Blair 111 machine has he powered to the outside of turns 1 and 2 from his 4th place restart position  and rocketed to the 2nd position by the time the field hit turn 3.

While Blair powered to 2nd, Jason Covert was mounting a charge on the Mark Pettyjohn machine for the 4th spot.

With 5 laps in, Blair was beginning to track down the 0 of Eckert, with Blair only a car length off the backend of the Eckert machine as they hit lapped traffic.

Blair continued to hound Eckert through lapped traffic, but Eckert was able to quickly move through the slower cars and extend his lead through lap 15, but a yellow flag would fly for the Derek Magee machine that stopped I turn 1.

On the restart, Blair used the same move he did earlier I the race to get into the 2nd position to move past Eckert on the outside of turns 1 and 2 to take the race lead while Jason Covert moved past the 7mm of Maresca for the 3rd spot.

Covert would work his way all the way up to 2nd but wouldn’t be able to hold the position as he gave both the 2nd spot back to Eckert, and 3rd back to Maresca by the time the yellow flag flew on lap 21.

When the green flag flew again, Eckert used the same move that Blair did on the previous restart to move by the 111 of Blair to retake the lead as the field came out of turn 2, but Blair powered back by on the inside of turns 3 and 4 to retake the lead.

A lap 26 restart proved crucial as Eckert was again able to use the top of the speedway in turns 1 and 2 to move past Blair, but this time Blair could not mount a comeback like he did on the previous restart.

With the race green the rest of the way Eckert was able to pull away to a commanding 3 second lead by the time the checkered flag flew.  Max Blair finished in the runner up spot, with Kyle Hardy, Michael Maresca and Ross Robinson completing the top five.

“I was being lazy and trying to run the smoothest part of the race track and I believe he had a little better car tonight” said Eckert in Victory Lane when asked about Max Blair challenging him through the early and middle portion of the race.   “I’ve gotta thank everyone involved.  This is for my grandson Lennox, his first one on one since the accident and this means a lot for us, for sure.”