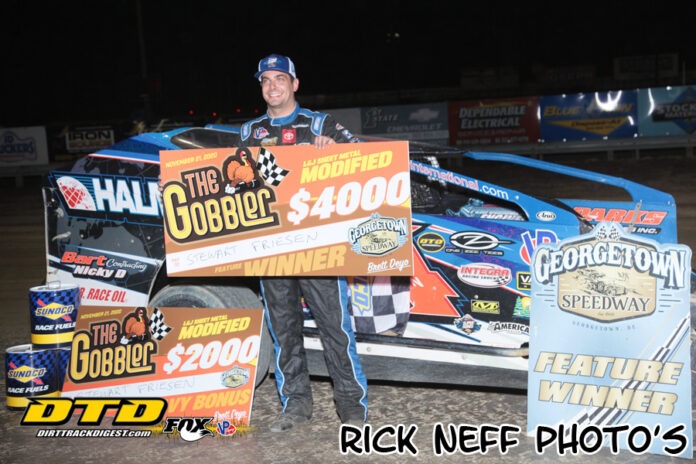 GEORGETOWN, DE – Stewart Friesen stormed off to possibly the largest margin of victory of the season, 13.3 seconds, during The Gobbler at Georgetown Speedway. The win is the final of the 2020 season for Friesen, capping off the Dirt Modified year in dominating fashion.

Friesen grabbed the lead from Mike Maresca on lap two of the 35-lap main, with Friesen instantly ditching any and all competitors. Maresca then fell into the clutches of Billy Pauch Jr. and Rick Laubach, with Pauch grabbing second on lap five. A jump of the cushion for Pauch meant Maresca went back to second, but while this battle was going on, Friesen was gone.

A yellow flag on lap 14 nixed Friesen’s big lead, with Maresca, Laubach, and now Anthony Perrego battling for second. Laubach took the spot on lap 16, with Perrego following through to third. As Perrego hounded Laubach, Friesen continued to drive away, a lead extending to 7.5 seconds with ten laps left.

With five laps to go, Perrego slipped under Laubach, but was nowhere near close enough to challenge Friesen. When the checkered waived, it was Friesen winning by nearly 14 seconds over Perrego, Laubach, Maresca, and Kevin Sockriter.

“We’ve seemed to have a lot of runner ups here recently, so it feels good to get a win,” Friesen said. “It’s always extra good to get the last one of the year too and get it like that. Tire choice played a big factor in that one tonight, and luckily we guessed right. We never got too jammed up in traffic either, we just kept rolling and our car was great all night long.”

“Stew was real good tonight, I don’t think cautions or anything would’ve done much,” Perrego said. “I’m just happy Gary (Simpson) gave me a chance to come down here and run, my stuff is all torn apart for the year. It feels good to jump back in this thing, pass some cars, and get a podium.

Rick Laubach ran a steady, uneventful race inside the top five, taking the last podium spot of the season with a 3rd place finish.

“We didn’t really plan on racing today,” Laubach said. “Luckily, work got done fast, and we had a day to get this ready. Lapped traffic is touchy here with the way it races, and I got passed by Perrego in that traffic.  Either way, good end to our season here.”

Did Not Start: Jim Britt