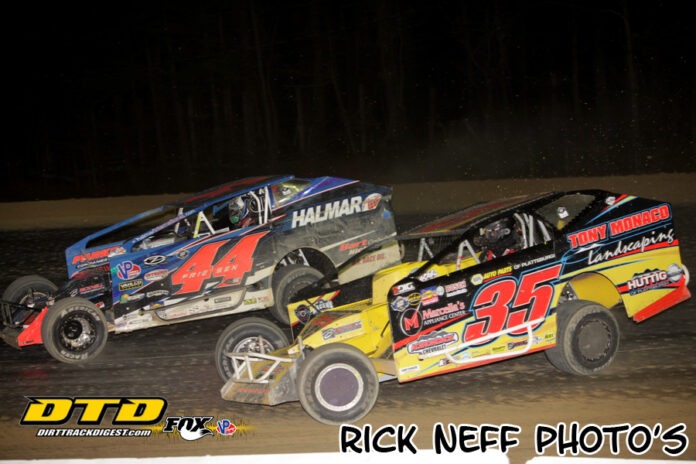 GEORGETOWN, DE – The 2021 season at the Georgetown Speedway got off to a thrilling start on Friday night. Sprakers, N.Y.’s Stewart Friesen won the 30-lap, $4,049-to-win main Small-Block Modified event with a final-lap, final-turn pass.

Night No. 1 of the Melvin L. Joseph Memorial saw clear, blue skies, a pit area with 211 cars, and a packed-to-the-brim grandstands at the historic Sussex County half-mile speedway. 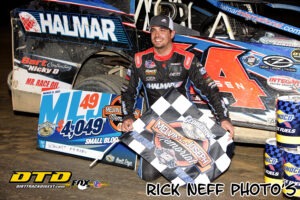 Anthony Perrego had climbed to second with Brian Smith’s No. 44; however, a flat left-rear tire ended his chances to pick up the win. The lap-13 caution put Keystone State star Rick Laubach into the runner-up spot.

Laubach seized the opportunity, sliding by Mahaney on the following lap.

Meanwhile, Friesen had slowly advanced from his eighth starting position into third, joining the top two up front.

The final 15 laps spun off caution-free, which would ultimately play a large factor in the late stages of the race. With five laps to go, Laubach caught slower traffic, and Mahaney and Friesen quickly closed in.

By lap 28, Mahaney and Friesen were on the back bumper of Laubach’s Ryan Kerr-owned No. 1K. Friesen took the white flag in third position but used the outside groove to – with the right-side of his car off the backstretch – to sweep past both Laubach and Mahaney, who was making his own bid for the top spot.

Mahaney’s momentum was broken by a lapped car on the inside line and Friesen reached the Sunoco checkered flag first, the second of his career in the Small-Block Modified competition at Georgetown.

Mahaney got underneath of Laubach to take the runner up spot, with Laubach rounding out the podium finishers. Mooresville, N.C.’s Max McLaughlin came home fourth in his debut in the Norm Hansell-owned No. 357. Tyler Dippel of Wallkill, N.Y., rounded out the top-five in the Bill Pascual No. 3.

A pit-bulging 63 STSS Crate 602 Sportsman hit the track in preparation for Saturday’s Belmont’s Garage South Region opener. Joe Toth (20.346 seconds) and Payton Talbot (20.447 seconds) were the quickest and will transfer to the redraw.

Collins unseated race-long leader Matt Hill and drove on to victory in the 20-lap main worth $1,049.

Kerry King picked up another Southern Delaware Vintage Modified 12-lap victory, his fourth since joining the division. King outdueled D.J. Cameron and Roscoe Clough for the victory. On the Sportsman end of the Vintage division, it was Robert Blann besting Maddy Jefferson and Terry Chaney to open the season with a victory in the 12-lap main.

Matthew Smith continued his winning ways from the 2020 season, kicking off 2021 with the Melvin L. Joseph Friday night win. Shane Clogg and Jerry Hill rounded out the podium finishers in the Season Opener.

Jay Lowman won his first career Delmarva Charger main event in the first feature of the night. Jeffrey Tubbs and Randy Merritt rounded out the top-three in the 12-lap event.

Attention turns to the season opener for the Bob Hilbert Sportswear Short Track Super Series (STSS) Fueled by Sunoco Velocita-USA South Region presented by Design for Vision and Sunglass Central. The Modifieds will go 49-laps for $10,049-to-win in the main event. The Belmont’s Garage STSS Crate 602 Sportsman will go 25-laps for $1,549-to-win.

Also on the card are 12-lap features for the Delmarva Chargers, Delaware Super Trucks, and Little Lincolns.

To learn more about the Short Track Super Series Fueled By Sunoco, visit