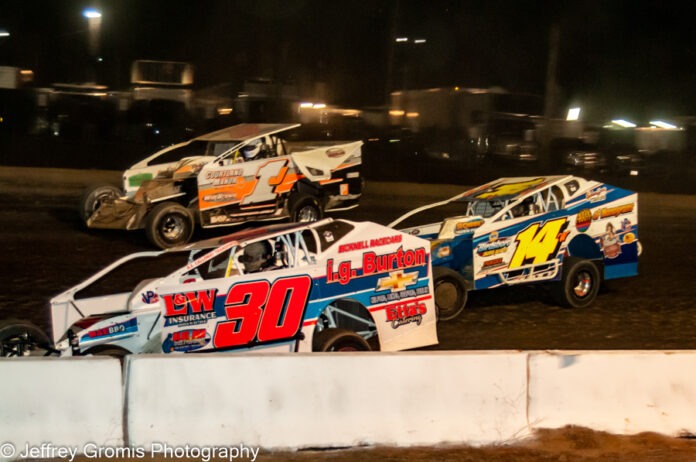 After 25 laps, the home state driver gave them something to cheer about.

Joseph Watson, who lives just north of the speedway in Milford, Del., picked up a $3,000 payday in the Chesapeake Paving 25-lap Modified main driving the iconic No. 30 owned by his grandfather, Eugene Mills. Watson bested his brother – Jordan – for the triumph.

Half-price grandstand admission – with $10 tickets – filled the historic oval on a beautiful night for racing.

After a dominant heat-race victory, ‘Jo-Jo’ launched off the outside pole of the 23-car starting field and took the top spot from fellow front-row starter Ryan Watt at the outset. The race was not without its share of twists and turns, however.

A grinding incident brought the race to a halt at lap eight when an apparent broken hub sent Brandon Hightower’s No. B52 flipping end over end on the frontstretch, igniting a multi-car tangle. Hightower, a Louisiana native, was transported to a local hospital for evaluation but was released shortly after midnight.

A second incident occurred moments later when Ryan Godown and Jordan Watson tangled. Godown’s No. 26 veered off the backstretch and into a Stockley Tavern billboard, bringing the billboard to the ground. Godown was uninjured but done for the event. Jordan Watson continued unscathed.

The second half of the race became a battle of the “Watson Boys” on their parents’ – Glenn and Donna – wedding anniversary.

Lapped traffic slowed Joseph’s pace in the closing laps, allowing Jordan to close to within a car-length, but Joseph held on to pick up his second Modified victory in the BD Motorsports Media LLC era of Georgetown history.

Announcer Pete Wortmann asked Joseph what he thought when he saw his brother on the front row for a restart.

“I wasn’t letting him beat me,” he said, drawing a laugh from the crowd.

Despite an ailing powerplant, Jordan Watson, also of Milford, nursed the Brent Hall-owned No. 18 to a $2,000 runner-up finish. H.J. Bunting completed a Milford sweep of the top-three positions in the Blades HVAC No. 65. Watt, of Boyertown, Pa., placed fourth and Matt Stangle, driving the Danny’s Pizza Pizzazz No. 51, recovered from an off-track excursion to complete the front five.

“The Thrill” Matt Hill of Georgetown rode the rim to victory in the First State Chevrolet RUSH Late Model 20-lap main, worth $1,000. Hill unseated race-long leader Austin Hubbard with a sweeping outside move in turns three and four.

Warren and Hubbard were the $50 Ad-Art Sign Company heat winners.

The 12-lap Little Lincoln event was a thriller with a series of unpredictable events unfolding throughout the main. Jordan Herbert was the best of the survivors, taking the win over Sean Smith.

Did Not Start: Kevin Sockriter

Did Not Start: Brayden Ritter

Did Not Start: Wyatt Cummings