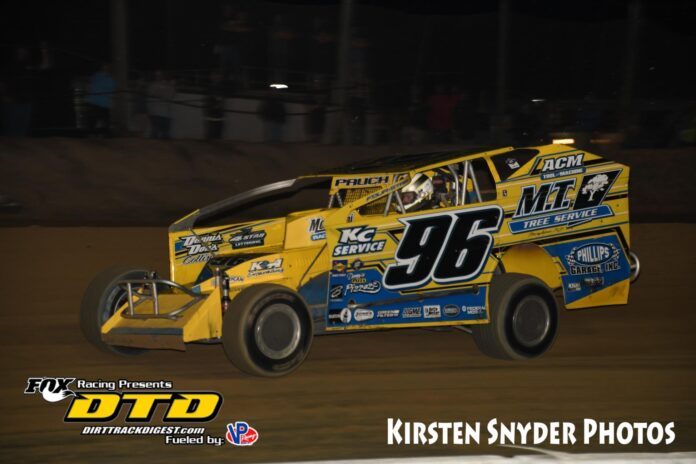 GEORGETOWN, DE – Four in a row.

The ‘Kid’s Kid,’ who started from 10th, worked his way to the front on a slick, smooth racing surface. Pauch Jr. outdueled Neshanic Station, N.J.’s Matt Stangle on a mid-race restart to drive away with the $3,000 payday.

“This was not the track we were expecting at all tonight, but we made a big change after hot laps and it worked out… we have such a good car, and it makes my life easy,” said Pauch Jr. of his return to Victory Lane.

Laubach raced off the topside to grab the early lead while Stangle rolled the outside from his fourth starting spot and quickly taking second.

An opening-lap yellow gave Stangle a restart alongside the ‘Quaker Shaker,’ and Stangle took advantage of the opportunity. Stangle darted around the outside of Laubach to take the lead.

While Stangle began pulling away, Laubach battled with Broomall, Pa.’s Jim Britt for the runner-up spot, allowing Pauch Jr. to close in.

Before Pauch Jr. could make any attempts to crack the top-three, a yellow came out, giving the ‘Kid’s Kid’ the opportunity he was looking for. Pauch Jr. used his topside momentum to go two-for-one, taking the runner-up spot and locking eyes on Matt Stangle’s No. 6.

While Pauch Jr. chased Stangle, Jim Britt got by Laubach for third, and the Ryan Kerr-owned No. 1K machine was under fire from Oley, Pa.’s Craig Von Dohren and Milford, N.J.’s David Van Horn.

A yellow on lap 13 for a slowing Ryan Krachun was what ultimately changed the complexion of the race for both Pauch Jr. and Stangle.

“I didn’t think we were gonna get Stangle, but he overshot turn one just enough on that restart that I was able to get a nose underneath him,” Pauch Jr. explained of his race winning move on the ensuing restart.

Stangle pushed up the racetrack just enough for Pauch Jr. to slide underneath him and take the lead for good.

Multiple late-race restarts gave Stangle and new challenger Von Dohren opportunities to race with Pauch Jr., but Pauch Jr. was up to every challenge.

Pauch Jr. led the final 12-laps of the race, picking up his fourth consecutive win in his Rick Holsten-owned No. 96.

Milford, Del.’s Jordan Watson grabbed sixth in his Brent Hall No. 18 and Laubach held on for seventh. Birdsboro, Pa.’s John Willman raced to eighth in his No. 74w – good enough for the $250 Ad-Art Sign Co. Spec Small-Block bonus. West Milford, N.J.’s Jesse Leiby finished ninth in his first Modified start at Georgetown and Laurel, Del.’s James Hill rounded out the top-10 in the Chesapeake Paving No. 1.

Old Bridge, N.J.’s Chris Allen led the first 24-laps of the race, which went non-stop. A yellow with half-a-lap remaining gave Alex Bright an opportunity to restart right behind Allen.

When the field went back to green, Bright wasted no time, throwing a slide job into turn one and taking the lead for good.

Todd Sammons made a last lap place of Jordan Herbert to claim the 12-lap Little Lincoln feature. The win was Sammons’ first win of the season. Herbert held on for second and Kirk Lawson rounded out the top three.

J.R. Bergman won the wild 12-lap Delaware Super Truck feature. After starting on the pole, Bergman fell back to sixth, and drove back forward to pick up the win. Jerry Hill claimed the runner-up spot and Bruce Cornelius rounded out the podium finishers.

Ashley Merritt stole the show in the 12-lap Delmarva Charger feature, leading the last two laps to claim the win. Robert ‘Pac-Man’ Paczkowski was the runner-up and Jay Lowman rounded out the top three.

Racing resumes at Georgetown Speedway on Friday, October 29 as the ‘Spec’ 358 Modifieds and RUSH Late Models kick off the ‘Mid-Atlantic Championship’ weekend.

The Bob Hilbert Sportswear Short Track Super Series (STSS) takes center stage for the weekend to crown champions for the STSS Modifieds and STSS Crate 602 Sportsman during the Oct. 29-30 event.

Did Not Start: Zac Weller

Did Not Start: D.J. Cameron