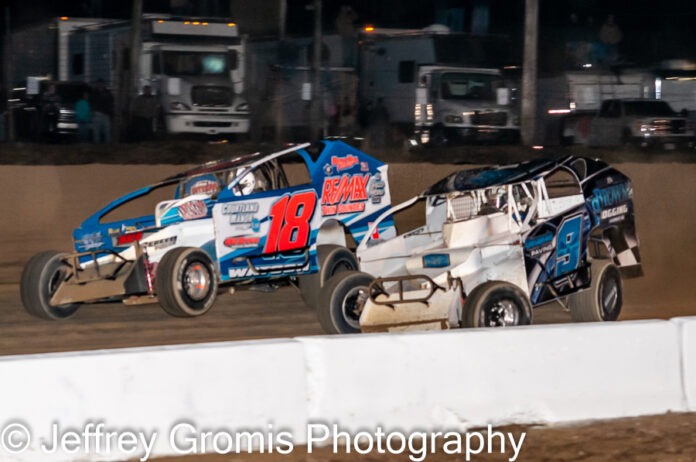 Milford, Del.’s Jordan Watson represented the First State on Friday night at Georgetown Speedway, winning the 25-lap J.W. Brown Logging Modified event. The win for Watson and the Brent Hall Motorsports No. 18 was his second in a row at the Sussex County half-mile oval. He earned $3,350 including a $350 bonus from Paradise Senior living as the top-finishing Delaware driver.

A massive crowd filled the Georgetown grandstands on Delaware State Sportsmen’s Association Night. A wide and smooth track greeted the 114 race cars in the pit area.

Watson was one of three different leaders during the fast-paced 25-lap main.

H.J. Bunting led the 27-car field to the green flag and launched off the front row to lead the opening lap. Bunting was surpassed for the lead by Danny Bouc in the Craig and Leslie Pondish-owned No. 6. Bouc darted to the inside of Bunting to take the lead on lap three, with third-starting Watson in tow.

Watson chased Bouc into lapped traffic before making his move on lap eight. Using the extreme inside lane through turns one and two, Watson surged ahead on the backstretch.

A lap-nine restart allowed Ryan Godown, who started eighth, to move into second.

For the final 15 laps of the event, Watson and Godown engaged in a cat-and-mouse battle through lapped traffic. Godown pulled to within a car-length in the latter stages, but Watson held on to extend his lead in the Georgetown Sunoco Championship Series standings.

Scott Hitchens, driving the Matt Smith No. 97, advanced from 27th to 11th and received the Rent Equip/Party Central $300 Hard Charger.

Austin Hubbard of Federalsburg, Md., drove the Klink Motorsports No. 49 to a wire-to-wire victory in the 20-lap First State Chevrolet RUSH Late Model event. Hubbard earned $1,000 for his efforts.

The MASS Sprint organization pulled 18 cars to southern Delaware on a Friday night.

Jay Lowman bested Joe Waters in a drag race to the checkered flag in the 12-lap Delmarva Charger main event. The two passed beneath the starter’s stand virtually side-by-side.

Did Not Start: Shelby Kelly