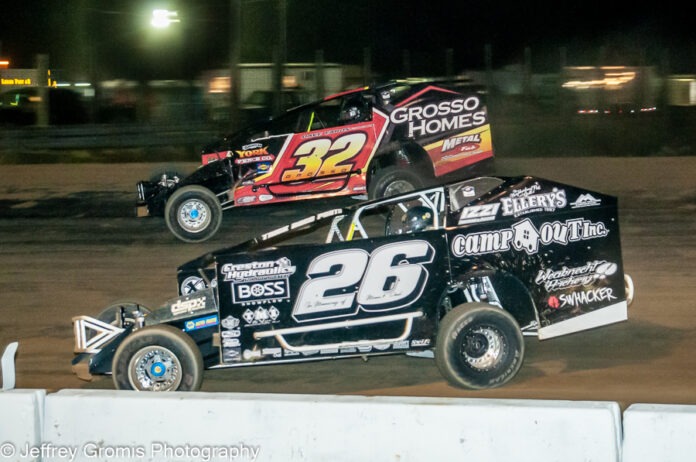 The Ringoes, N.J., resident – enjoying a career season – moves into the Sunoco Championship chase point lead with his triumphant performance worth $3,000.

“We’ve won here before but man it seems like it’s been forever,” proclaimed Godown in Victory Lane.

“I just gotta tip my hat to my guys, we’ve been working really hard to get everything going the right way… this big-block wasn’t 100% tonight but we got the job done.”

Godown fired from the outside of the front row with Belle Mead, N.J.’s Brandon Grosso alongside following the redraw for starting positions.

Godown quickly slid by Grosso in the opening turn of the race, taking the top spot in the early going.

The opening 10 laps of the 25-lap affair were plagued by several caution flags for multiple drivers.

Eric Kormann and Mark Van Vorst both experienced difficulties, each slowing to a stop on the racetrack to bring out yellows on the first two laps.

Milford, Del.’s Joseph Watson was the next car to have problems, as his left rear wheel came off the No. 21w, sailing into the fence on the outside of turns three and four.

Milford, Del.’s Jordan Watson and H.J. Bunting, who was running third, both had problems on lap six bringing out a caution. Watson would return, while Bunting’s night was over.

Watson returned, only to bring out another yellow one lap later. The point leader entering the program got his car to the attention of his crew and returned for good after the lap-seven yellow.

“My only concern was restarts because our carburetor was skipping a little on them and it seemed like there were a million tonight,” Godown said of the numerous opportunities Grosso and Pipersville, Pa.’s Danny Bouc had at him on the restarts.

The next nine laps clicked off while Godown continued to set the pace up front, and  Bouc continued his pursuit of the leader. The race’s final yellow came on lap 16 when Austin Hubbard slowed in the first turn.

The final nine laps went off without a hitch, and while Bouc was catching Godown in the late stages, he came up short.

Bouc settled for second in the Craig and Leslie Pondish No. 6 and Sewell, N.J.’s Richie Pratt Jr. rounded out the podium cars in the Danny’s Pizza Pizzazz No. 51.

Grosso took fourth in his family-owned No. 32 and Joseph Watson rebounded from losing a left-rear tire and cutting another one to round out the top five.

The Myerstown, Pa., resident led all 25-laps in dominant fashion to pick up the win, the first of his Georgetown Speedway career.

Tyler Ross, last year’s winner of the event, got to second in the late stages but was unable to seriously challenge Schott for the victory.

After problems in the Modified, Austin Hubbard was victorious in the 20-lap First State Chevrolet Late Model feature driving the Karl Klink No. 49.

Hubbard passed Trevor Collins on a mid-race restart to take the lead he would never relinquish. Collins closed in late as Hubbard ran the bottom groove, but Hubbard switched to the top in the final three laps to pull away with the win.

D.J. Cameron topped the Southern Delaware Vintage Stock feature, taking advantage of Jamie Eicholz misfortune to take the lead away and the win.

Nathan Smith, who finished third overall, topped the Sportsman portion of the event.

Kirk Lawson used his pole starting position to his advantage, leading all 12 laps to take a crowd-pleasing victory with the Little Lincolns.

Robert Smith won the battle of the Smith brothers in the Delaware Super Truck feature. Robert’s brother David raced from the 13th and final starting position to the runner-up spot, but Robert held on for the win.

Did Not Start: David Dill.