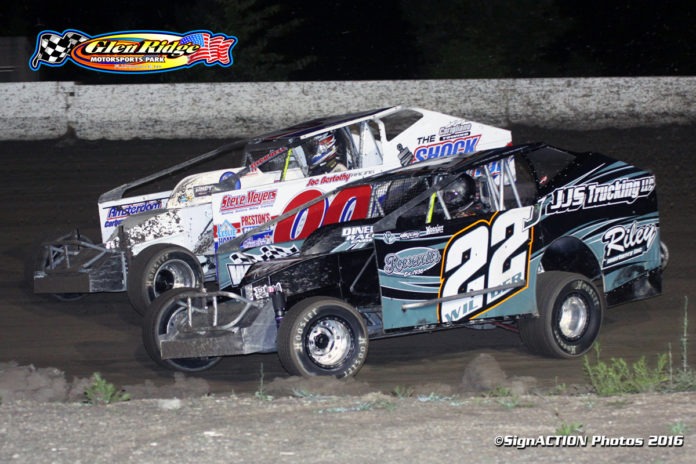 FULTONVILLE, NY – On Saturday evening January 28, the New York State Stock Car Association (NYSSCA) celebrated its 48th annual awards banquet at the Polish Community Center in Albany, NY. A total of over 350 people filled the banquet room as drivers, owners, fans, and sponsors celebrated the accomplishments of their race teams for the 2016-racing season. Master of Ceremonies for the event were John Stanley and Dan Martin.

OVERALL OUTSTANDING PERFORMANCE – MATT SHEPPARD – 29 total wins in 2016 at 15 different tracks, won his fifth career Super DIRTcar Series title in 2016 with 12 wins in series events after starting up his own race team in 2016.

Sheppard has had success in the past at Glen Ridge as well winning six times in the modified division the last win coming on July 8, 2012.

Sheppard was not able to attend the banquet as he was at the Bicknell Racing Products Open House but sent an e-mail to NYSSCA President Tom Coughlin, which said:

“I would like to thank NYSSCA for all that they do for our great sport as well as for this award. 2016 was a very special season for me and this award really means a lot. Also, congratulations to all of the award winners and Hall of Fame inductees tonight. Thank you!”

CAR OWNER OF THE YEAR – JAKE SPRAKER – a dream season for the car owner out of Gloversville, NY with two of the most popular drivers at the Fonda Speedway in his cars Ronnie Johnson (modified) and Rocky Warner (sportsman) who both won titles in their respective divisions at the “Track of Champions” in 2016. Between the two drivers, they won five track/series championships at seven different tracks including Glen Ridge.

NYSSCA AWARD OF EXCELLENCE – JOSH COONRADT – put up numbers in the street stock division that are second to none with 23 wins (14 at Fonda, 8 at Albany Saratoga, and one at Glen Ridge), 30 top 5’s, and 34 top 10’s in a total of 34 starts in 2016. Coonradt is a third generation driver who will be racing pro stocks in 2017 and the award was a very special one to him after the loss of his father Darryle and his grandfather Harry. Coonradt won his first career street stock feature at Glen Ridge last year on September 3, 2016.

Awards handed out to Glen Ridge drivers in all of the other divisions at the NYSSCA banquet were as follows:

DRIVER OF THE YEAR