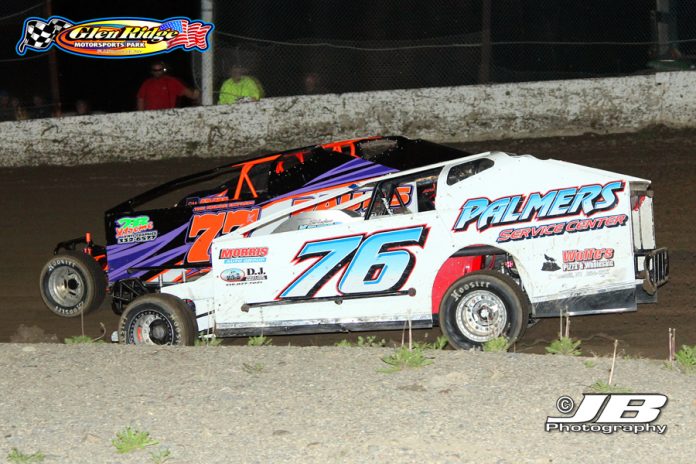 FULTONVILLE, NY – Nestled on top of the hill just outside of Fultonville New York in the town of Glen is a little race place known as ‘The Ridge.’ A place known for high action-tight quarter racing it has had its fair share of ups and downs. More recently the speedway has struggle with low car counts and minimal fan attendance forcing the track in a new direction, which saw successful car owners Mike Parillo and Ray Sefrin step in to save the fastest quarter mile on dirt.
During the past week things have happened in a flurry for the new management team starting with securing the lease for the facility. With multiple pieces of equipment already owned by the pair, Parillo and Sefrin are ready to usher in a new era of racing on the hilltop. Tow trucks, water trucks, an ambulance, and other necessary pieces of equipment to ensure operation and driver safety are already in place.
A brand new race card will take place on a brand new night, as Glen Ridge will switch to running Sunday evenings with warm ups scheduled for 5:30 PM and racing at 6 PM. The weekly card will feature Crate Modifieds, Limited Sportsman, and 4-Cyl. Currently the track is looking for feedback from Street Stock drivers about an opportunity to become a part of the program should a minimum of 10 drivers be committed to running weekly, but at this time a possible special is in the works for the full fender division.
Alternating divisions include the POWRi Midget Sprints, Sling Shot, and Vintage Modifieds with the possibility of IMCA returning if there are 10 cars committed to race. Small Block Modified specials are also on the drawing board, as possible end of year specials. The possibilities are endless for the new management team, however back to the basics and offering a solid program starting at 6 PM and finishing by 9 PM is the goal each and every Sunday evening.
Highlighting the program will be the Crate Modifieds, which will run based on DIRTcar Sportsman Modified rules. They are title Crate Modifieds, as anyone with a DIRTcar legal 602 can compete in the division. New track management has offered a rather attractive purse structure, as this will be the headline division going forward. With 20 cars or more Glen Ridge will pay $750 to win and $75 to start. With 19 cars or less the purse will be $600 to win and $50 to start. Both purse structures will be available on the website.
Along with the change to the headline division at ‘The Ridge’ comes an opportunity to build a solid point fund, which Parillo and Sefrin are willing to show as it grows. $20 off each and every $35 driver admission will go directly into the point fund for that particular division. For example should there be 20 cars, $400 would be directly deposited into the point fund and returned to the drivers at the year end points party paid back through the top ten in points.
This same system can be used to build both the Limited Sportsman and 4-Cylinder point funds. For fans, crews, or anyone else the back gate is a mere $25 admission. This is a proven point fund building system that will directly benefit the drivers. So where does the 50/50 go each week?
Parillo and Sefrin devised a plan to use the 50/50 money to give back to the drivers. Each week the total 50/50 will be split with half going a lucky fan and the other half will be given randomly by draw to a driver in the field 2nd place and back. Each week a different division will have the chance to earn the 50/50 bonus. Example: if the 50/50 is $400 then $200 goes to the 50/50 winner and $200 will be given to a randomly drawn finishing position drawn by the division winner to award for 2nd place back.
Grandstand admission prices are going down for the race fans; $8 for adults, $6 for seniors, and $2 for children 11 and under. Food prices are also going to come down per Ray Sefrin and Mike Parillo has plans to upgrade the facility. New managements goal is simple; change the culture and atmosphere at ‘The Ridge’ and to do so they’ve enlisted the help of King Of Dirt Racing promoter Rob Hazer, whom will race direct and help with PR during the remainder of the 2017 season.
Free parking and camping is available each and every week at Glen Ridge Motorsports park and more information will be forthcoming, as the team transitions into operating the fastest quarter mile on dirt. The first event under new management is open practice for all divisions scheduled on June 18th. Everyone’s patience and cooperation is appreciated during this transition.
The goals are simple for the new management team; ensure stability, make drivers comfortable, reward them for their efforts consistently, and bring back the fun atmosphere at the little track that could.
More info about Glen Ridge Motorsports Park can be found online at www.glenridgemotorsportspark.net, or on Social Media at www.facebook.com/glenridgemp. The track can be contacted by dialing 518-627-4060 at any time. If there is no answer please leave a message and the call will be returned promptly.