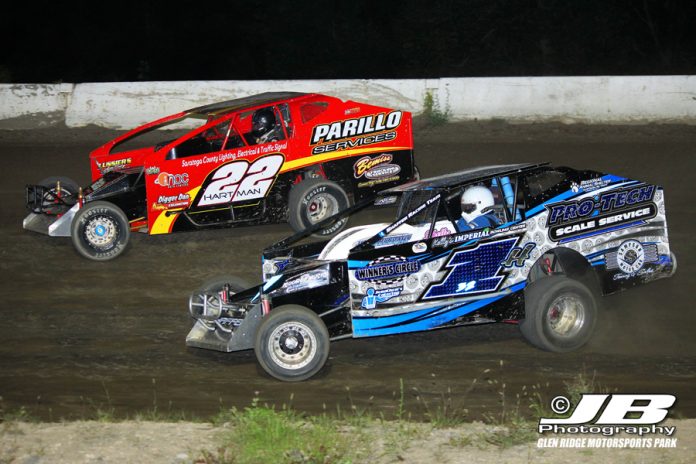 FULTONVILLE, NY – After a successful meet and greet with fans on the front stretch at the fastest quarter mile on dirt it was another action packed evening of short track racing at The Ridge, which saw Tim Hartman Jr., Vinny Visconti, Luke Horning, Andy Graves, Mike Hill, and Derrick McGrew Jr. claim victories

The happiest man in racing Harry Shaffer II and Alissa Cody would lead the 19 car Crate Modified field to the green flag, with Shaffer taking the early lead. Teammates Chris Curtis and Whitey Slavin quickly went to work from their second row starting positions, while Brian Calabrese and Ricky Quick engaged in battle with Jim Introne Jr. and Rob Maxon for position inside the top 10.

Multiple heavy hitters were on the move forward including Tim Hartman Jr., Bobby Hackel IV, Dave Constantino, JaMike Sowle, Rocky Warner, and Jeremy Pitts. Their progress would be slowed by a series of cautions about midway through the 25-lap feature, which saw Chad Edwards, Dave Constantino, Joe Orlando, aforementioned Jim Introne Jr., and Whitey Slavin all retire to the pit area with mechanical failures.

Back up front all eyes were on Shaffer, as he now had a highflying challenger in the form of Tim Hartman Jr. Big Time Little Tim started 9th on the field and took the lead on lap 13. Despite a couple late race restarts he held off challenges from Shaffer to earn his 3rd win of the season. Shaffer finished the event battling with Rocky Warner for the runner up spot in a great race. Shaffer, Warner, Sowle, and Hackel rounded out the top five.

Limited Sportsman point leader Kathy Bellen and Vinny Visconti led the field to the green flag for their 20-lap feature event. Visconti took the lead early and held off challenges from Mikey Jackson, Dave Richer, and Bill August to claim the win. Dave Richer, Bill August, Ryan Harrison all the way from England, and Mikey Jackson rounded out the top five.


Kyle Hoard and Jason Samrov led the Pro Stock field to the green for their 20-lap feature event, with Hoard pulling out into the early lead. He’d have a challenger quickly as Ivan Joslin took over the top spot on lap four. Point leader Luke Horning had an eventful night with two flat right rear tires caused by rubbing on the shock, but salvaged the evening by taking the win after inadvertent contact between Stone and Joslin sent Ivan to the pits and Nick to the rear. Stone, Hollner, Kyle Hoard would round out the top five.

Pat McSpirit took the early lead during the 4-Cylinder Mini Stock feature event until lap four when point leader Chris Andrews took over the top spot. By lap five he had his hands full with teammate Andy Graves who would take the lead from his car owner and power to another win. Cole Lawton challenged and took the second spot leaving Andrews third, with McSpirit and Wayne Russell Jr. rounding out the top five.

Next week a regular show is scheduled, along with the return of Street Stock Frenzy for round two this season at the fastest ¼ mile on dirt. Chase Aussicker won the first time out for Street Stocks in 2017 at The Ridge, but can he make it two-for-two?

Racing every Sunday night at the Fastest ¼ Mile On dirt during the summer months. Admission Prices are $8 for adults, $6 for seniors, and $2 for kids 11 and under. More information about Glen Ridge Motorsports Park can be found online at www.glenridgemotorsportspark.net, or on Social Media at www.facebook.com/glenridgemp. The track can be contacted by dialing 518-627-4060 at any time. If there is no answer please leave a message and the call will be returned promptly.