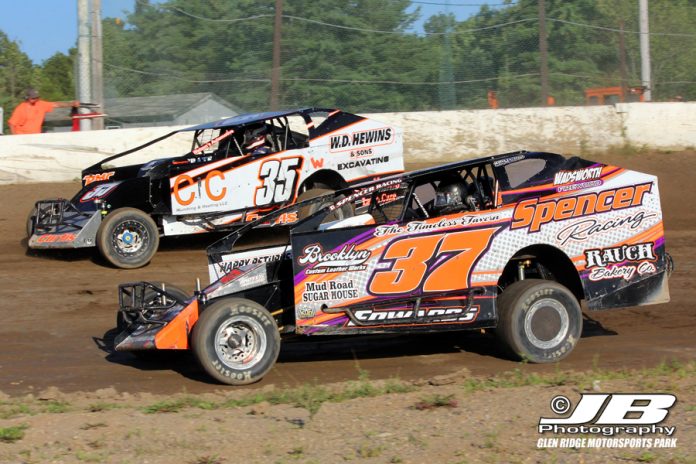 FULTONVILLE, NY – It was another night of Military Appreciation where drivers walked the stands with helmets to raise funs for Montgomery County Veteran Services. Total donations reached $450 from generous fans at The Ridge. Fans were then treated to some great racing, which saw Chad Edwards, Dave Richer, Ivan Joslin, Andy Graves, Bryce Cherko, and Matthew Backus claim victory.

Chad Edwards and Whitey Slavin would lead the Crate Modified field to the green flag with Edwards quickly taking the top spot away. Title contenders Chris Curtis and Alissa Cody were battling for position inside the top five, while the heavy hitters began their march forward.

Dave Constantino had a bad fast Cyclone Chassis moving from 8th to 2nd and began chasing down the leader. Big Time Little Tim was working his way up from the 12th starting position to race inside the top five. Brian Calabrese was battling with Chris Curtis for position, while Ricky Quick was working on a top 10 finish.

This all was behind Chad Edwards, whom after three strait weeks of DNF’s finally had some good fortune picking up his second feature win of the season at The Ridge. Constantino, Slavin, Hartman Jr., and Calabrese rounded out the top five. Dave Constantino earned the $100 bonus from Yurkewitz Auto Crushers.

Limited Sportsman action saw Kathy Bellen and Mikey Jackson lead the field to the green flag. Both drivers battling for a tightly contested championship this season, but Dave Richer and Bill August are challenging. Richer had the better evening of the pair, as he took the lead on lap six and never looked back. He’d roll to his second feature win of the season. Jackson, Kelley, Anthony Alger, and Bellen rounded out the top five.


In Pro Stock feature event action Ivan Joslin and Luke Horning were putting on a battle early and often. Kyle Hoard came to play, as he’d venture up into third and then challenge for the lead, before Ivan Joslin took the top spot back. Joslin would never look back and pick up his second win in a row followed by Justin Knight, Luke Horning, Jason Smarov, and Kyle Hoard rounding out the top five.

4-Cylinder Mini Stocks had another solid night with Chris Andrews taking the early lead before loosing the handles on the 00d. He’d rejoin the field, but his teammate Andy Graves has been a house of fire. He’d pressure for and eventually take the lead from Pat McSpirit and roll to his fifth win of the season. Steve Ryan has been fast since making his debut at the Ridge. He’d finish second with McSpirit, Andrew, and Colby Shepler rounding out the top five. The ninth place finisher Dale VanAllen earned the 50/50 bonus worth $250.

Next week is nostalgia night, along with MVVDMS vintage racing. It’s also going to be NYSSCA night where drivers who have NYSSCA memberships can earn bonus cash. 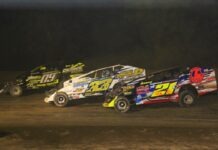 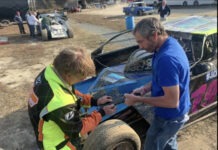