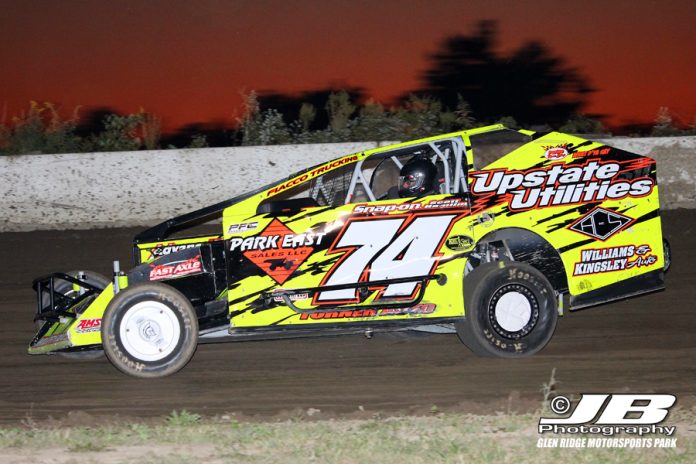 Brian Calabrese and Demetrios Drellos led the 358 Modified field to the green flag. Drellos jumped out to the early lead, while Calabrese battled to hold back JR Heffner and Bobby Varin. Former track champion Shaun Pangman found himself in a dogfight with Mike Maresca for position inside the top six.

Yellow flew on lap 10 for Elmo Reckner facing the wrong direction. On the restart Drellos fought off the advances of Heffner, while Pangman moved into third. Maresca made a move to take over fourth from Varin, while Calabrese and Nelson battled for sixth.

On lap 22 the yellow flew for Jessey Mueller who suffered a right rear flat. On the restart Heffner applied pressure to Drellos for the top spot in an intense battle. Off turn four the 111 running the topside contacted the front stretch wall ending a great night. In the process, it caught up Shaun Pangman who had a solid run going of his own.

On the restart Heffner went back to the point, while Elmo Reckner made a move past Maresca to take the runner up spot. From there on out it was smooth sailing for JR Heffner who picked up the win in his first ever appearance at The Ridge. He was followed by Maresca, Varin, Reckner, and Calabrese rounding out the top five.

Brian Calabrese took the lead at the drop of the green in the Crate Modified feature event, with Chad Edwards and Tim Hartman Jr. battling for the runner up spot. Jeremy Pitts and Chris Curtis were also engaged in battle for position, while Dave Constantino and Alex Bell raced for positions inside the top ten as well.

Calabrese caught lap traffic near the mid-way point and Edwards was ready to pounce. He’d use a high side move in lap traffic to take the top spot away bringing Tim Hartman Jr. along with him into the runner up spot. The yellow flew on lap 23 for Jim Osgood who suffered a flat left rear tire with just two laps left.
On the restart Tim Hartman Jr. used a power move on the high side to sneak a win away on the last lap. Edwards, Calabrese, Pitts, and Bell rounded out the top five.

Bill August and Robbie Albreda led the Limited Sportsman field to the green flag, with August taking the early race lead. Yellow on lap four slowed the field when Colin Clow got up into the wall. On the restart Albreda and Travis Billington went to battle for the runner up spot, while Marty Kelley III was making his way forward after starting near the tail. August never looked back picking up the win followed by Robbie Albreda, Marty Kelly III, Travis Billington, and Colin Clow.

Kenny Martin Jr. and Luke Horning led pro Stock 50 lap special to the green, with the 2017 Glen Ridge champion taking the early lead over the 2017 Albany Saratoga champion. On lap eight Martin made the power move taking the top spot, while Horning lost the handles for a moment giving up a number of positions.

Gus Hollner and Ivan Joslin had an entertaining battle going for the runner up position, while JJ Courcey sat patiently in fourth watching it unfold. A lap 25 yellow slowed the field the field when Matt Roberts found himself facing the wrong direction in turn 3.

On the restart Luke Horning took the top spot from Gus Hollner, but Ivan Joslin had other plans. He powered past into the lead, but it was short lived as contact from the JJ Courcy machine sent Joslin into the turn four wall and the 07 was sent to the tail.

On the restart Justin Knight would pressure for the top spot with Luke Horning riding the high side. Knight would take the top spot away on lap 37, but on lap 45 JJ Courcy made a high side move to take the lead away and appear to claim the 50-lap victory. He was followed by Knight, Miles, Hollner, and Martin rounding out the top five.

During post race inspection the 07 Pro Stock of JJ Courcy was found to have GM Bolts that were questionable. Bolts that appear tampered with are subject to further inspection of the engine. The driver and team were offered an option to pull the motor and have it sent for further inspection paid for fully by the track. They refused the tech process resulting in their disqualification for tampered bolts. The Pro Stock win was awarded to Justin Knight.

Zach McSpirit and Colby Shepler led the 4-Cylinder Mini Stock feature to the green flag. PJ Bleau wasted no time making his presence felt taking the top spot, while Robert Gurney moved into the runner up position. Early race cautions plagued the race forcing a single file restart by lap 4. Bleau went back to the lead on the following restart, but on the last lap Damon Anderson made an outside move to steal the win in a dramatic finish. PJ Bleau, Cole Lawton, Colby Shepler, and Robert Gurney rounded out the top five.a