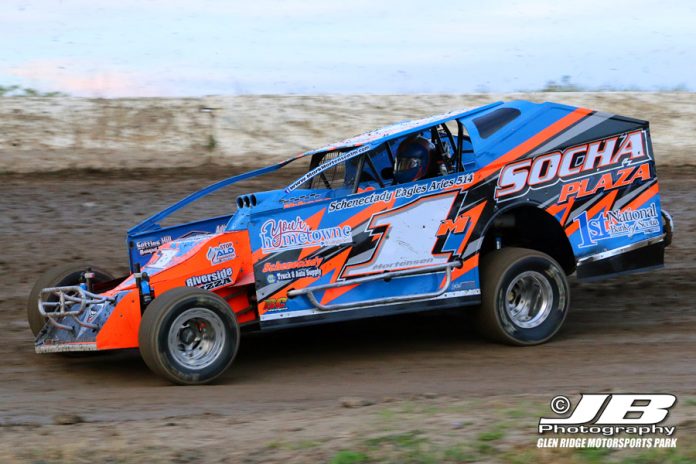 FULTONVILLE, NY – Round two of what has been dubbed the ‘fall series’ at the fastest ¼ mile on dirt saw Mark Mortensen return to The Ridge Saturday night and pick up the Crate Modified win after a spirited duel with Jeremy Pitts. Mike Parodi, Justin Knight, Andy Graves, Chase Aussicker, Sloan Cherko, and Danny Ballard were also victorious on the evening.

Some might argue heads up starts aren’t very exciting. Well don’t tell that to Jeremy Pitts and Mark Mortensen, as Saturday night they put on a spirited battle during the Crate Modified 30 lap feature event. When the green flag dropped Pitts took the early race lead with Tim Hartman Jr., Mark Mortensen, and Brain Calabrese battle for position inside the top five with Joe Orlando.

On lap 18 the first yellow flag waived for Bill August who found himself against the outside wall in turn two. When green flag racing resumed Mark Mortensen used an outside power move in turn one to take the top spot from Pitts leaving him to fend off Big Time Little Tim and a charging Dave Constantino.

Central New York hot shoe Tyler Trump was in house making his first start ever at The Ridge along with Albany Saratoga young gun Michael Coffey Jr. Trump would roll to a solid sixth place finish, with Coffey Jr. finishing directly behind him in 7th.

Back up front Mortensen and Pitts battled through the later stages and a couple restarts, but the former track regular Mortensen was strong. He’d pick up the win over Jeremy Pitts, with Dave Constantino, Tim Hartman Jr., and Brian Calabrese rounding out the top five.


Mike Parodi, Mike Block, and Bill ‘Nubz’ August were on hand for Limited Sportsman action and ran with the Crate Modifieds, but scored separately. Parodi finished 10th as the highest finishing Limited Sportsman on the evening and was awarded the victory respectively.

Pro Stock action was hot and heavy early on between Ron Delease and Justin Knight. Delease would hold the top spot for 10 laps before Knight powered into the lead and never look back. Chuck McSpirit has returned to racing this season at The Ridge and drove home to a solid second place finish, with Delease, Samrov, and Don Folts rounding out the top five.

Mini Stock action gave fans an action packed 15-lap feature event with Andy Graves grabbing the early race lead. The multi-time feature winner would have his hands full though, as Damon Anderson, Robert Garney, and Steve Ryan were in hot pursuit. Ryan would slip past Anderson into the runner up spot and make a run at Graves, but the Chris Andrews owned 16 held on for the win. Ryan, Garney, Anderson, and Tim Simonds rounded out the top five.

Chase Aussicker came into the evening looking to go 4-for-4 on the year. He’d won the previous three Street Stock specials at The Ridge in 2017 and at the drop of the green had his hands full with Joey Wilson and Lou Gancarz. Steve Cosselman moved forward through the field to the runner up spot, but Aussicker wasn’t going to be denied. He picked up his fourth win of the season follwed by Cosselman, Wilson, Jim Gronki, and Cliff Haslun.

Next Saturday October 28th will be the season finale at The Ridge closing the doors on the 2017 season for new promoters Mike Parillo and Ray Sefrin.