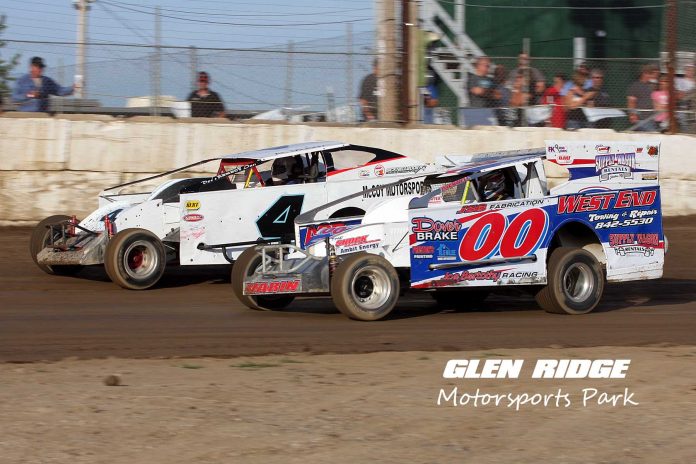 FULTONVILLE, NY – It was just after the turn of the new century that a farm field located in the hills moments south of the famed Fonda Fairgrounds went from producing agriculture to exciting, knuckle to knuckle auto racing. It started with karting and then grew into full sized stock cars and along the way produced some of the best old school racing and personalities this side of the 1970’s.

The “it” of course is the Glen Ridge Motorsports Park. The Ridge is approaching it’s 20th year of operation and has produced some memorable names and stars during its time. All of these, regardless of the track should be preserved, acknowledged and celebrated for generations to come. The Ridge is no exception.

Over the past couple of week’s two of these personalities began discussing the idea of a Glen Ridge Motorsports Park Hall of Fame. Once the basics were worked out, the idea was presented to track promotors Ray Sefrin and Mike Parillo. With their green light, the Hall of Fame was born.

The next move for Butch Hazzard, Jr. and Toby LaGrange was to assemble a five-person Hall of Fame Committee. The duo will be joined on the committee by Ed Biittig, Sr., Jim Ellis and Joe Kriss.

Hazzard is an official at The Ridge and is well versed in the history of the quarter-mile speed plant. He also designed and maintains the track website, social media and has had a large hand in assembling the official track record books. Hazzard also has a long history as an official at the track, having served in many positions throughout the years.


Toby LaGrange – LaGrange is a former Race Director, PR Director and Journalist at the track. He is also a local Motorsports Announcer and is currently the voice of the CRSA Sprint Car Series and the 177th Fonda Fair (motorsports) as well as an on-camera personality for Race Pro Weekly.Com. He has been a Motorsports Journalist of some form since 2001. LaGrange brought the Fonda Speedway Hall of Fame back to life in 2015 and served as the Hall of Fame Committee head during the same year.

Ed Biittig, Sr. – Biittig is a veteran journalist of 30 years. His resume is matched by few and exceeded by even fewer. Biittig has covered The Ridge since its inception and currently pens a column for Dirt Track Digest.Com and the Times Journal of Cobleskill. He, along with his wife Betty, are members of the Fonda Speedway Hall of Fame. Biittig has also served as a New York State Stock Car Association (NYSSCA) officer and Fonda Speedway Hall of Fame Committee member.

Jim Ellis is also a veteran journalist. Ellis has been a reporter for the Leader Herald Newspaper of Gloversville and Johnstown for many years and has covered the action at the quarter mile since its first green flag. Like Biittig and LaGrange, Ellis is a former Fonda Speedway Hall of Fame Committee member and is one of the most recognized journalists in the area.

Joe Kriss started waving the green and checkered flags (and everything in between) in the grandstands when he was a kid. He would go on to be the head starter at The Ridge, a position he has held since 2014. He has also been a flagger at the Fonda Speedway since 1997 and the Dodge City Speedway since 1992.