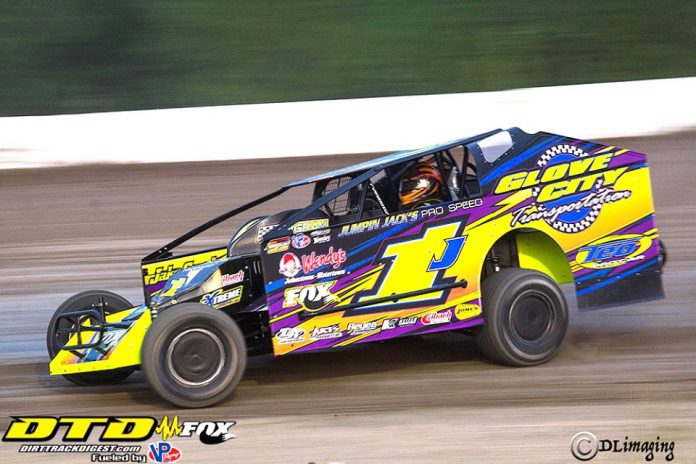 FONDA, NY –  Memorial Day, a day of remembrance of those who have served this great country and never made it home. We salute those fallen and pause today to remember them and thank for them for our freedoms.

After 4 weeks of rain, mud and more rain, the Glen Ridge Motorsport Park was finally able to get the season started this past Sunday night.

Rocky Warner and Andrew Buff led the Red Chair Crate Modifieds to Brandon Krutz’s double green flags for the start of the Heroes Honored 30. Warner got the edge over Buff on the start and set sail at the front of the pack. Scott McCoy was hounding the top 2 front runners solid in his 3rd place view. The only caution in the race came when the #22 of returning Ridge driver Dan Fassett slowed in turn 4 as the drive shaft broke hitting Fassett in the leg. The driver was fine and checked over by the Ridge Medical Team after the race. On the restart Warner once again took off and cruised to his 23rd career sportsman, and $1,000 to win feature in his Jake Spraker Used Cars #1J followed by Buff, McCoy, Kurtis Hohensheldt and Joe Orlando. “The month of May has been awfully good to us” a jubilant Warner said in victory lane. “Thank you for everyone who came out tonight, it was great to see the fans coming out to support the track”.

The Limited Sportsman took to the speedway in their 20-lap feature go with a couple of rookie sensations, thus far in the northeast Brendan Gibbons and Brett Mortensen, leading the field to green. Gibbons was able to grab the hole shot and set sail into turn 1. Mortensen, and the hounds behind him were starting to make some moves to get to the front to chase down Gibbons. A jingle brought out the caution when Mortensen and Bill August got together resulting in the front end going down on August’s Electric City Taxi mount ending his night. On the restart Gibbons had to hold off hard charging Mortensen but kept him at bay long enough to earn his 1st career victory in open wheel competition in his Gibbons Military Motors #b24. Mortensen conceded to 2nd followed by James Vendetti, Jerry Cohn, and Bill Port.

Two of the best Yurkewecz Auto Crusher Pro-Stock pilots Luke Horning and Ivan Joslin started on the front row of the 20-lap season opener for the division. Horning made plans to check out from the field in his lighting fast #2h, but the Autism Awareness #49 of Joslin had other plans. Joslin was all over the back deck and drivers door of Horning making the defending track champion earn every bit of the victory in a classic duel of two of the very best in the division. Steve Cosselman finished 3rd, Jim Normoyle 4th, and Justin Knight finished 5th after starting in the 10th position.

All-Star Slingshots put on a heck of a Memorial Day feature event. By virtue of their heat race wins, Jim Mudge and 2018 track champion Mike Hill led the field to green in the 15-lap feature event. Hill took off looking to defend his crown in the season opening night. Hill led most of the event until a late race restart saw Danny Ballard, the cagey veteran, get the upper hand going into turn one. Rookie All-Star Slingshot, and 2018 JR Slingshot Champion, Garrett Poland was making his presence known going to the high side of the speedway and completing a 4-wide pass to jump into a podium position. Hill was able to close in on Ballard, but had to settle for 2nd followed by Poland, Tyler Vadney and Don Boonstra who started 10th in the 12-car field.

The C.R.S.A. Sprint Cars return to the speedway after a 3-year hiatus. Josh Flint has already confirmed his entry in the event with one goal in mind, breaking his own lap record, which is the fastest lap ever recorded in any car at the Ridge!