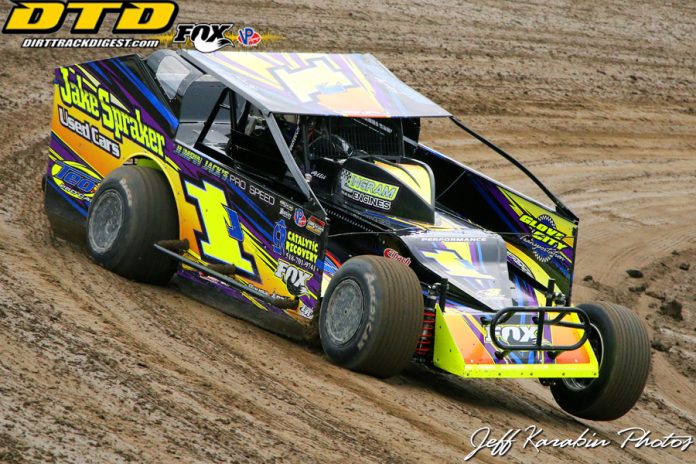 FULTONVILLE, NY – Making the call to race when there is weather in the area is a hard thing to do. Management at the Ridge knew they were in for a long day when mother nature opened and put some moisture down on the racing surface. Mere minutes from cancellation, the call was made to stand by and see if trucks could do anything with the surface. With the CRSA Sprints on the racing card, a decision would have to be made quickly, but with a great team, determination, and a fighting attitude towards mother nature, the show ran off without a hitch.

A ‘Flyin Squirrel’ and a ‘Lunchbox’ paced the Red Chair 602 Crate Modifieds to head flagger Joe Kriss’ green flag for the start of the feature event. Warner took off in his Jake Spraker Used Cars #1j while Chad Edwards was hounding Warner on the top side before slipping up allowing Andrew Buff his chance to get by and set his sights on Warner. Scott McCoy had settled in to 4th with Ryan Heath 5th. Warner appeared to have the field covered for the second week in a row, but Buff was starting to reel in the leader at the halfway mark. McCoy’s awesome run would end when his front Panhard bar broke. With 5 to go Buff got Warner’s back bumper but wasn’t able catch him. Warner picked up his 2nd in a row followed by Buff, Edwards, Heath and Ryan McCartney.

There is nobody hotter this season in the Pro-Stock division than ‘The Cuz’ Luke Horning. Horning outbattled car builder Nick Stone, Justin Knight, Steve Cosselman and Ivan Joslin enroute to his 2nd win of the season, and 22nd career Yurkewecz Auto Crusher Pro-Stock win, putting him just 2 wins away from tying Nick Stone for possession on top of the all-time wins list.

Tucker O’Connor landed at the Fastest ¼ Mile on Dirt and went home with his 1st career victory at The Ridge over Brett Mortensen, Jerry Cohn, Brendan Gibbons, Harold Robitaille.

With the late start, the 1st ever MINI-SHOCK event was held to a feature only format. We cannot thank Damon Anderson and the Damon Anderson Racing Team for putting up the money and event. A true professional and a person who loves this sport. Jeff DeGroat and John Napoli started on the front row of the race, but a lap 1 red flag for Zack McSpirit’s #4, as he took a hard hit to the turn 4 wall, would restack the field. After the green flew once again the Mini-Shock was back underway with action all over the racetrack. One battle on the track would end up being for 2nd as PJ Bleau and John Napoli were side by side for nearly half the event. In the end Jeff DeGroat picked up the $500 Dual Cam win, and Wayne Russell Jr picked up another win in the Single Cam!


The Hammer Cliff Haslun out dueled a high flyin’ Jason Samrov and Damon Anderson to pick up his 1st win of the season in the Street Stock division, and the 5th of his career at The Ridge.

In another exciting All-Star Slingshot race seen Brett Putnam and last week’s winner Danny Ballard lead the field to green with Putnam getting the early advantage. Ballard, Garrett Poland and Mike Hill were close by while Putnam tried to distance himself from Ballard and the rest of the field. Jim Gage showed himself up to the top 5 closing the gap on Poland and Hill. Lap traffic would start to become a factor, but Putnam used the right lane and kept his #6b rolling and picked up his first win of the season over Ballard, Poland, Hill and Gage.

Darryn Fallis hounded the front runners of the NPS Jr Slingshot feature event until a late race jingle gave him the lead and he cruised on to his 2nd career GRMP victory. Brock Pinkerous, Adrianna DeRocher, Sloan Cherko, Matthew Backus rounded out the top 5.

Please note a scheduling change, the Twin 25s for the Modifieds have been moved to June 23rd. This coming weekend will be a single 35 lap event for modifieds.