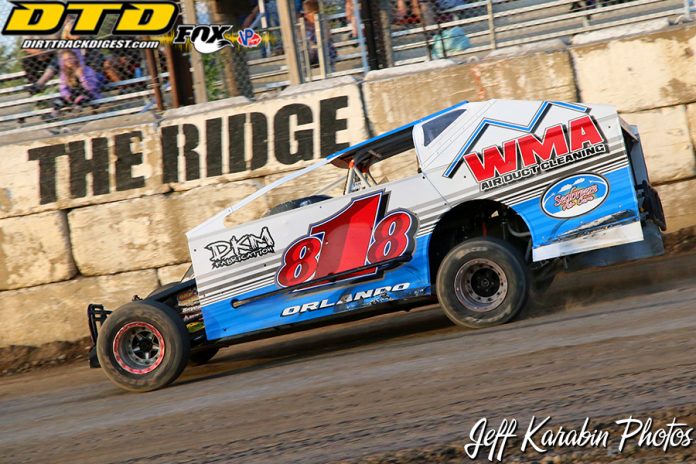 FULTONVILLE, NY – The question of the season so far at The Ridge was ‘Who can tame the high flyin’ squirell Rocky Warner?’ Warner has won 5 out of 5 Red Chair Crate Modified features thus far, and with not being handicapped in the field, he would start the feature in 8th position.

Scott McCoy and Joe Orlando brought the field to head starter Brandon Krutz’s green flag with Orlando getting the hole shot going into turn one. Andrew Buff would find himself in the runner up position, but by this time Orlando was setting a blistering pace out front. The before mentioned Warner was finding himself in a battle with Michael Coffey Jr, Ryan Heath and a slew of others At the halfway point of the 30 lap affair, Orlando was still out front, but Buff, Calabrese, Warner, Jeremy Pitts and McCoy were gaining ground. The field was slowed by caution with a handful of laps remaining, and when the green flag flew again Orlando held off all challenges from Buff, Pitts and McCoy to pick up his 2nd career victory.

Harold Robitaille had his #03 on cruise control for 80% of the limited sportsman feature event until Bill August got by and held off all competitors for the checkers. Robitaille, Travis Whitbeck, Jerry Cohn, Dana Camenga, Isiah Walker rounded out the field.

Justin Knight and Andy Graves led the 16 car Yurkewecz Auto Crusher Pro-Stock to green with Knight taking the lead into the first turn. A few cautions at the beginning of the race slowed the pace and eliminated some heavy hitters by the likes of Ivan Joslin, Buck Gasner and Ivan Joslin. When the race resumed, Knight remained the leader, but invading Nick Stone did not let him get away easy. Knight, in his Shults Auto Center #8k, glued himself to the bottom of the ¼ mile and held it straight and easy to pick up the popular victory. Stone settled for 2nd, Andy Graves, Jim Normoyle, Devon Camenga completed the top 5.

The Northeast Tobias Slingshot Tour was in town for the Junior & All-Star Slingshots. Brock Pinkerous and Corky Warner led the field to green with Pinkerous setting sail out front. Ryan McCoy in just his 2nd race quickly moved himself to second and set his sights on the NPS #5 of Pinkerous. McCoy threw every trick in the book he had at Pinkerous, but came up short as he shadowed Pinkerous under the checkered flag. Corky Warner, Matthew Backus, Darryn Fallis completed the top 5.

18 All-Star slingshots checked in to compete in the Northeast Tobias Tour race, and Kyle Herve and Chris Darrow brought the quick field to green with Herve getting the point. Darrow would retire early with an apparent blow power plant. This would set up invader Herve vs. home driver Danny Ballard to battle for the win. Ballard tried low, he tried high, but Herve had just enough to hold Ballard back to pick up the 20 lap Tobias Tour victory! Tyler Vadney, Mike Bellinger, Bryan Preville rounded out the top 5.

Next Sunday, July 21st, the Ridge is back in action with the Palmer’s Service Center Modifieds are back at the Fastest ¼ Mile On Dirt along with double points for all other divisions!