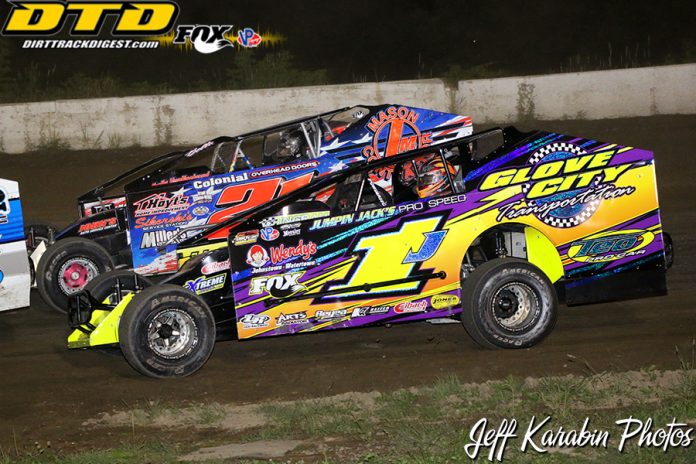 FULTONVILLE, NY – On a night we honored Glen Ridge Hall of Fame member ‘The Silver Fox’ Don Warner with the ‘Who’s Your Daddy’ 602 Crate Sportsman Regional Championship, so many things happened that seemed so fitting for the evening.

By virtue of a draw in the tower, Chris Corbett and Ryan Heath led the field to the green flag in the 55-lap (the year Don was born) affair. Corbett would gain the front spot heading into turn 1. Rocky Warner would use a highside move to take the top spot over Corbett & Andrew Buff. Buff would hound the Spraker 1J for many laps until contact with a yuke tire ended the stout run by the Buff machine. Warner held off the late race challenge from Chad Edwards, enroute to the $1,097 payday! Edwards was second, Corbett 3rd, Tucker O’Connor 4th and Scott McCoy, who wrecked in the heat race would rebound for 5th. Tanner Warner (Don’s grandson) ran in the Mike Bellinger owned 28b to 10th place finish!

Isaac Walker picked up his 1st career Glen Ridge victory in the Limited Sportsman division after passing the ‘Rookie in the Rookies’ Garrett Poland in his debut in an open wheel car late in the contest. Harold Robitaille, Jerry Cohn, Poland and Dana Camenga were the finishing 5.

Cliff Haslun outdueled, and outlasted a super fast Damon Anderson to pick up his 4th win of the season in the Street Stock division.


Josh Kane continued his dominant season and Dale VanAllen picked up his first win of the season in the DOHC and SOHC Mini Stock division.

Danny Ballard put another win in the column over Brett Putnam and Mike Hill in the All-Star Slingshot division.

Corky Warner (Don’s grandson) started 4th in the Northeast Paving & Sealcoating Jr Slingshot division and picked up his 1st career feature win in only his 4th star of his early career.