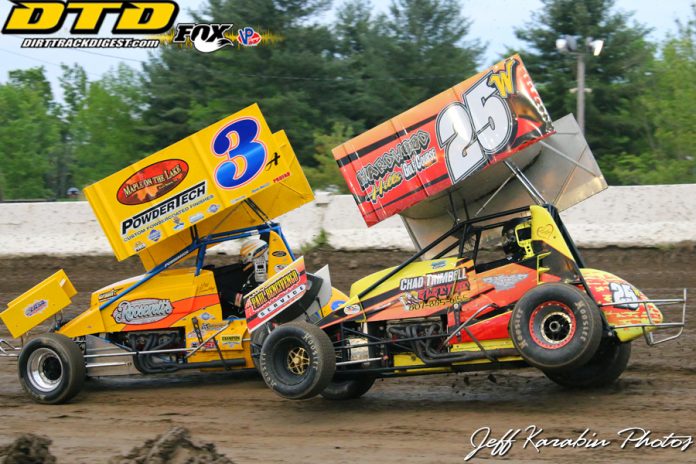 FULTONVILLE, NY – The SuperGen Products with Champion Power Equipment CRSA Sprint Car Series completed their second double header weekend Sunday night with the final visit of the season to the Glen Ridge Motorsports Park. The Fultonville quarter mile would produce another first time winner in 2019. That winner would be Dana Wagner.

The event was the eighth round of the season and the third round of the Kennedy’s of Troy Northway 90 Challenge Mini-Series.

Josh Flint and Jerry Sehn led the field down to the green flag with Flint grabbing the early lead. Flint’s night almost came to an end early on when Justin Mills broke heading into turn three on lap one. Flint spun to avoid but was able to hold on to his position as he was not the reason for the caution flag.

When racing resumed Flint would remain out front with third place starter Dana Wagner closing in. A lap 21 restart for Cory Sparks would set up a four lap dash to the finish. Wagner would apply pressure to Flint but could not get past. Flint would take the checkered flag over Wagner.

Following the event, there was a technical rules violation involving the Brandon Wright Motorsports machine piloted by Flint. Wagner would be declared the race winner over Sehn, Dalton Herrick, Emily VanInwegen and Darryl Ruggles. Heat races for the 16 car field were won by VanInwegen and Wagner.

The 2019 SuperGen Products with Champion Power Equipment CRSA Sprint Car Series is back in action on Friday August 9th at the Albany-Saratoga Speedway in Malta, New York.