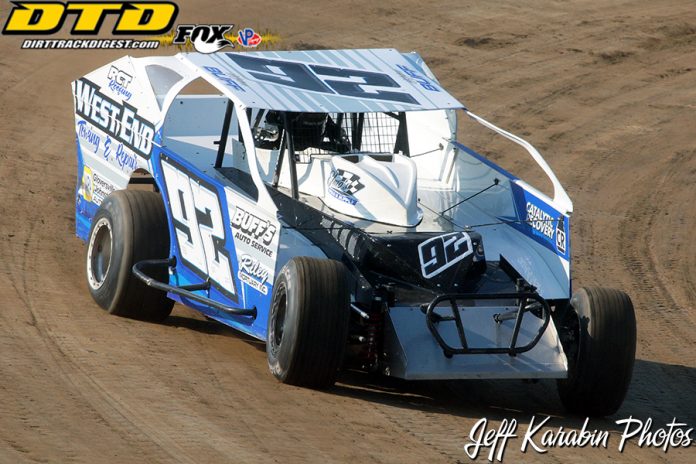 Ryan Heath and Andrew Buff brought the Red Chair 602 Crate Modified field to head flagger Joe Kriss’ green flag. Buff would get the hole shot going into turn one as he set his sights on capturing his 1st win of the season at The Ridge. Heath was running 2nd but slipped up allowing Ryan Macartney to sneak by for the runner up spot. While running a solid 3rd, Heath would bring out the caution with a left rear flat tire ending his great run. On the restart Buff would once again take control over Macartney and pick up the 30-lap feature event. Macartney, Jim Introne Jr, Joe Orlando and Scott McCoy would complete the top 5.

Jerry Cohn and Tanner Warner would be the front row of the Limited Sportsman feature event, and it was Warner sailing it into turn 1 into the lead. Warner was in control for the majority of the event until the car started to develop a push allowing Cohn to close in and eventually take over the lead. The rest of the field would shuffle in the last few laps, and with one lap to go Garrett Poland made a ‘Just Send It’ move into turn 1 taking the second position. Cohn took home another win over Poland, Harold Robitaille, Tanner Warner and Jordan Miller.

Another night of firsts would continue in the Yurkewecz Auto Crusher Pro-Stock division. By virtue of his 1st heat race win, Buck Gasner and Andy Graves rocketed to together into turn one from the front row. Graves would take the lead and lead lap one. Gasner battled for 2nd place, but got shuffled back a few positions. The big story of the night was Graves, who has been so close for so long in the pro-stocks, and completely dominated the feature event picking up his 1st career pro-stock win over Ivan Joslin, David Demorest, Steve Cosselman, and Devon Camenga. Graves also picked up an additional $100 bonus from Bill & Cindy Yurkewecz from Yurkewecz Auto Crushers.

Damon Anderson picked up his 4th win of the season in the competitive and respectful street stock division over Cliff Haslun and Kenny Allen.


Josh Kane continued his dominance in the Dual Cam Mini Stocks over John Napoli and Justin Bellinger, while TJ Marlitt made a last lap, photo finish pass to rocket by Zack McSpirit in the Single Cam Mini Stocks.

Danny Ballard picked up another victory in the All-Star Slingshot division and tied runner up finisher Mike Hill in the point standings. Brett Putnam, Mike Bellinger and Tyler Vadney completed the top 5 in probably one of the most exciting and competitive slingshot race of the season.

Next week, Sunday August 18th is the biggest night of the racing season at The Ridge! The postponed ‘VENGEANCE’ modified race!

The NY6A Sprint Tour is in town and the 2019 Glen Ridge Hall of Fame Induction Ceremonies during intermission.

This season is the year to be
part of the Ridge! Come on out and enjoy some exciting side by side racing
action at the ‘Fastest 1/4 Mile On Dirt!’